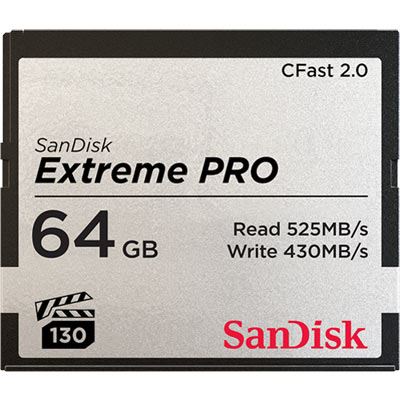 Designed specifically for filming Full HD and 4K video, the SanDisk 64GB Extreme Pro (525MB/Sec) CFast 2.0 Memory Card is ideal for use with professional cameras and camcorders. It boasts read speeds of up to 525MB/s and write speeds of up to 430MB/s, making your post-production workflow more efficient. Its large 64GB capacity provides space for RAW images and high-quality video.

Tested Under Extreme Conditions
This memory card can operate in temperatures ranging from -4ºF to 158ºF (-20ºC to 70ºC).

Back to top
Back to top
Product Code: 1617420-ob-wex Manufacturers Part Number: