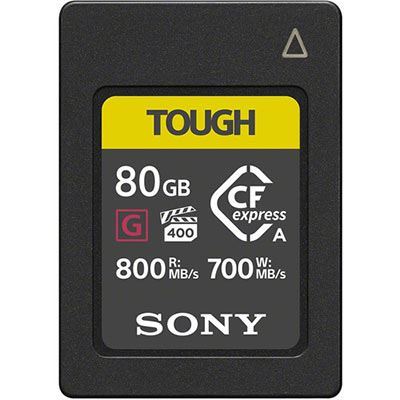 Sony's Cfexpress Type A memory cards are the next step in memory card speed, durability and reliability. These cards are built to Sony's "TOUGH" specification and will deliver incredible read/write and transfer speeds. The cards will provide up to 700MB/s write speed and 800MB/si read speed and with the large storage capacity, they lens themselves to high-speed continuous shooting, allowing you to capture upwards of 1,000 uncompressed RAW still images, as well as the capture of 4K 120p movie recording at high bit rates for long periods of time. These cards are designed to ensure a professional and stress-free shooting experience for both photographers and filmmakers.

Sony's Cfexpress Type A cards are a welcome addition to their TOUGH spec cards which offer unrivalled durability. These cards will deliver incredible transfer speeds and reliability whilst shooting, giving you confidence whilst shooting ensuring all your content will be safely stored for when you get to post-production. The cards will achieve write speeds as high as 700MB/si and read speeds as high as 800MB/si, which in turn reduce buffering times and giving you a further stress-free shoot. The design of these cards lends themselves to high-speed continuous shooting, allowing you to capture upwards of 1,000 uncompressed RAW still images, as well as the capture of 4K 120p movie recording at high bit rates for long periods of time. It's all about giving you the confidence and the choice to continue shooting without the need to change cards as often you might with slower, lower capacity cards.

Sony has introduced an effective heat sink into these cards which transfers the heat generated by the card to the exterior of the card. This is particularly useful when transmitting large amounts of data at the high speeds which these cards offer. This is achieved by Sony implementing their original allow that has impressive thermal conductivity. All of this allows you to be able to record for long periods of time, even when recording with demanding formats, such as 4K 120p internal recording.

Reliable To The End

Sony's Cfexpress Type A cards feature File Rescue data recovery software that allows you to recover accidentally deleted RAW images and 4K video from memory cards. As well as this, Sony's Media Scan Utility media diagnostic software has been updated to support CFexpress Type A cards with will allow you to diagnose and receive a warning before the number of read/write cycles approaches the card's limit.

Back to top
Back to top
Product Code: 1747560-ob-wex Manufacturers Part Number: CEAG80T.SYM