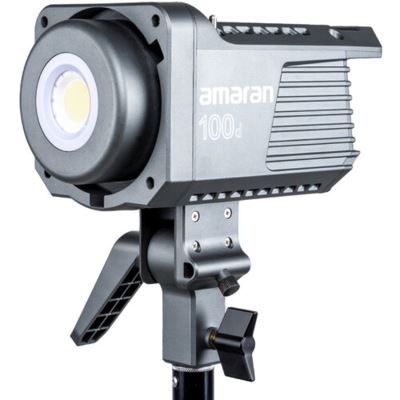 The Amaran 100d LED light is a 200W light source with 5600K colour and a CRI/TLCI rating of 95/96 advanced accuracy in colour rendering). In simpler terms, this LED produces stunning brightness and is incredibly versatile - dimmable from 0 to 100%. Make adjustments to light intensity via the Sidus Link App, transforming your smartphone/tablet into a handy Bluetooth controller. With 8 customisable effects built into the 100d, you have access to industry-standard ligh More

Continue Shopping Checkout
Please Login or Register to add to your Wish List.
Back to top

The Amaran 100d LED light is a 200W light source with 5600K colour and a CRI/TLCI rating of 95/96 advanced accuracy in colour rendering). In simpler terms, this LED produces stunning brightness and is incredibly versatile - dimmable from 0 to 100%. Make adjustments to light intensity via the Sidus Link App, transforming your smartphone/tablet into a handy Bluetooth controller. With 8 customisable effects built into the 100d, you have access to industry-standard lighting setups at the touch of a button. This includes paparazzi, fireworks, lightning, faulty bulb, TV, breath, flash, and explosion. It also comes with an umbrella mount and a Bowens reflector mount - allowing access to Amaran light shapers, as well as other accessories that use this industry-standard mount. Amaran most definitely had the modern content creator in mind when developing this LED light source - perfect for portrait photography, interviews and video production.

Amaran have used cutting-edge LED technology to allow the Amaran 100d's 100W COB LED output to be comparable to a 750W tungsten light. It is also incredibly versatile on set, with 0% to 100% dimming control for pin-point illumination management. The 100d scores impressively on the Television Lighting Consistency Index at 95+ (out of 100). This means that you have the ability to reliably enhance colour and detail within the scene - emphasising natural colour instead of the green/magenta hues produced by less-advanced lighting setups.

The 100d is incredibly portable and simple to set up. It features an all-in-one housing, standing as one of the easiest studio lights to adjust and transport due to it being a fully-integrated fixture. The built-in fan ensures that the LED remains cool during extended shooting, and the kit weighs in at only 3.4kg - great for when a scene requires multiple lighting setups.

By incorporating a Bowens mount, the Amaran 100d can take the form of almost any lighting rig. If you require a soft light, hard light or even a spotlight, simply add the compatible Aputure lighting modifiers and get to work! Compatible modifiers include (but not limited to) the Light Dome, Fresnel and Lantern. An umbrella holder is also included within the 100d's design for further efficiency in speed and softness.

The Sidus Link app is a serious gamechanger for gaffers, providing professional lighting control via a user-friendly application available on both iOS and Android. Mesh technology allows every light available in the Aputure and Amaran series to auto-connect, expanding the range of your network to up to 100 lights (Yes that's right, 100). You can adjust brightness, colour temperature, effect, and even programme effects between multiple fixtures. The Sidus Link app is seriously smart, ideal for the modern creative.

What is the Television Lighting Consistency Index?

The Television Lighting Consistency Index (TLCI) was developed over an extended period when people became aware of the response curve of the?red, green and blue video sensors in an electronic camera being so different from the response curves from the red, green and blue cones of the human eye. This means that optimal illumination profiles for either one may not match the other. For example, we may see slight variations in light and colour from how they were initially optimised by a camera system. TLCI provides a way to quantify high-quality, electronic camera-friendly illumination sources - with the Amaran 100d rating incredibly well at 95+ (out of 100).

Is the Sidus Link App available on both Apple and Android devices?

Yes, the Sidus Link app is free for both Apple and Android devices via the App Store or Google Store. It can be used on a smartphone, however, using an iPad or similar tablet may suit your needs better for use on set.