I remember meeting Angus McBean in the mid 80’s when he was quite old and living near the same Suffolk village. I didn’t really know what to say to the great man, I think I just said how much I admired his work. To be generous to him, his health wasn’t good then and I would rather describe his reaction as off hand rather than taciturn. He just said that it was a long time ago and all in the past. And I suppose it was for him, but not for us, his work is still very much loved and admired and that’s why I wanted to visit his exhibition of photographs at the National Portrait Gallery.

Angus McBean was born in South Wales in 1904, an unusual child born to an average family. From an early age he showed a great interest in the theatre, make up, costume and making masks. He bought his first camera at the age of 15, a Kodak Autograph and started taking pictures of local landscapes and architecture. After the death of his father he moved to London which gave McBean the opportunity to shine. He became a member of the Kibbo Kift an offshoot of the scouting movement that wore a strange green uniform he adored. He met and married a fellow member, but his affections lay elsewhere and it didn’t last. His photographs and his theatrical masks were exhibited at a teashop in West London and were noticed by the well-known photographer Hugh Cecil who offered McBean a job at his own studio. Whilst learning much from Cecil, McBean opened his own studio in Victoria to specialize in theatrical photography.

In 1936 Ivor Novello asked McBean to make masks and take pictures for one of his productions. He went on to photograph many actors and actresses who were virtually unknown then, people like John Gielgud, Robertson Hare, Vivian Leigh and Laurence Olivier. He soon became famous as his work was seen in well-known magazines of the time, Picture Post and the Sketch. McBean also became well known for his surrealist work in the late thirties, working with the artist Roy Hobday. Like the American photographer Man Ray, McBean took to the surrealist image easily, with his flamboyance, love of theatre and the ability to create fantastic studio props to shoot well-known figures of the day.

This phase of his career did not last long however and after the war he was back taking more traditional portraits in a new studio near Covent Garden. As his health deteriated and with the demise of the popular photo magazine he closed his theatrical and other studio. In the early 60’s he began taken pictures for EMI and shot various record covers for Cliff Richard and the Shadows, Shirley Bassey and the Beatles album Please, Please Me. By the mid 60’s he had semi retired to a house in Suffolk that he was restoring, but he had already built up an enormous and important body of work. A series of Christmas cards published from 1933 until 1986, featuring himself, his surrealist work of the late 30’s and a huge body of theatrical and other portraits. Coming out of retirement in the early 80’s he was commissioned to shoot some more work for French Vogue. The last few pictures in the exhibition were taken in 88 and include Vivian Westwood and Jean Paul Gaultier. He died on the night of his 86 th birthday in 1990.

On display are over 100 pictures in chronological order from the 1930’s to the late 80’s. The first thing that you notice is the sheer technical quality of the images. Nearly all printed in black and white, with wonderful tones and all superbly lit. Much of the work is achieved by double exposure and montage, seamlessly printed. One can’t help thinking that if Photoshop had been around in the 30’ and 40’, McBean would have been one of its greatest exponents.

McBean is a master of composition and given that the portrait photographer’s task is to capture the essence of someone in one image, McBean is proof if any were needed that this can be done. Many of the portraits tell a story about his subjects, Noel Coward’s portrait taken against a backdrop of theatrical trunks, Margot Fonteyn beautifully framed through a ballet dancers legs and Ivor Novello shot amongst a montage of sheet music, books and piano keys. Most of his subjects look away from the camera lens and out of the picture, we look at them as though they are engaged with business elsewhere and we are just catching a glimpse of them unnoticed.

I’ve tried to select a few images to give a feel of his work, a difficult task. The first image is of Rene Ray taken 1938 and combines McBean’s use of materials, illusion and theatre. It shows the face of Ray depicted as a theatrical mask and has an artificial air to it and yet we know her face is real. Beautifully lit and printed it’s a delightful portrait. 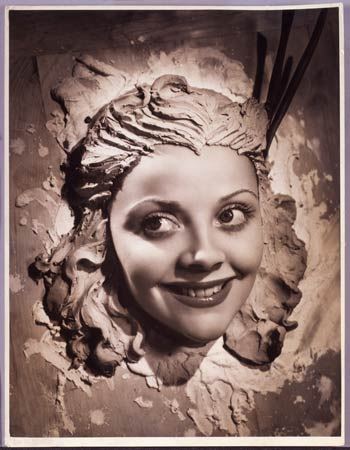 This closely cropped portrait of McBean’s friend Quentin Crisp, resting his head on his hands is so well lit. The high lights fall on the lips not the eyes making Crisp look positively feminine. I suspect that was just the result they were both after. 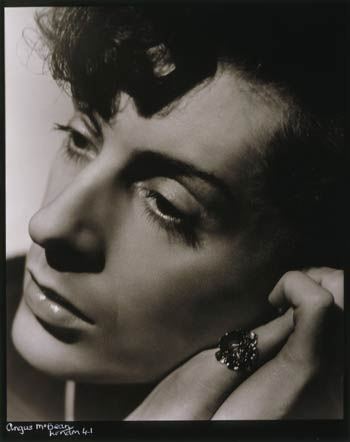 This next picture of Vivian Leigh is an image many of you will recognise. Taken in 1938 it became one of McBean’s best-known portraits and was used by the Post Office on a commemorative stamp. A wonderful portrait, combining a very strong composition with the most beautiful lighting. No wonder it became a classic. 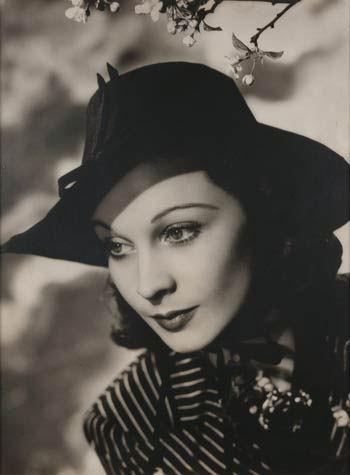 I’ve already mentioned the portrait of Margot Fonteyn and as you can see the composition is just perfection. Fonteyn is wearing a black dress and is seen through the legs of a ballet dancer. She is looking straight into the camera arms folded, legs crossed, her pose gives the whole image an incredible strength and depth. For me, this has to be one of the best portraits in the exhibition. 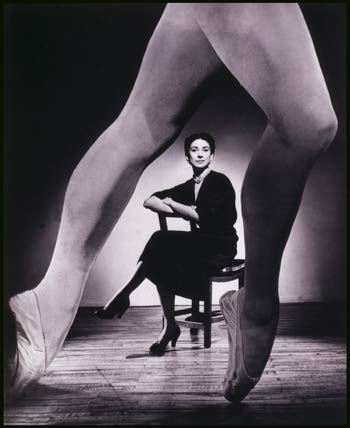 Angus McBean shot and printed his own Christmas cards, featuring himself, from the late 30’s to the early 80’s.He uses all his technical trickery and imagination on these cards, montage, double exposure, surrealist influences along with extravagant sets and costumes. Every card is different and each one a visual treat. The card I’ve chosen here is of McBean’s 1939 Christmas card depicting himself as Neptune, God of the Sea. 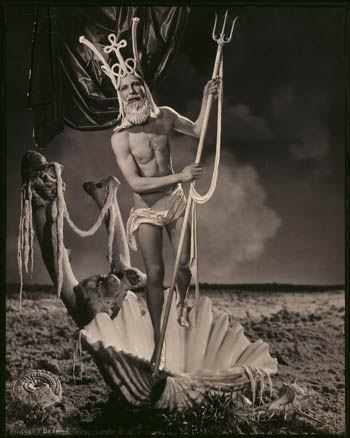 The final picture that I’ve chosen is of Audrey Hepburn taken in 1950. A delightful portrait showing Hepburn rising up from the ground between classical columns. Again the lighting is superb showing Hepburn bathed in a soft even light. 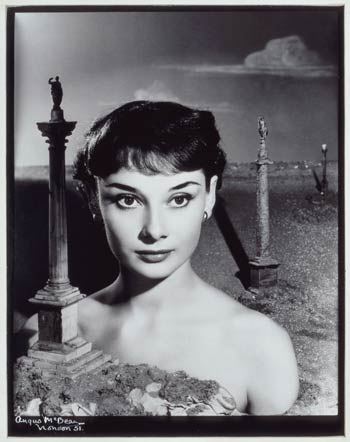 I could talk about so many of the portraits at the exhibition, Flora Robson emerging from a desert like barren landscape, a beautiful piece of surrealism. The picture of Elizabeth Welch the American singer and actress shot with such dignity and poise. The Fire Eater, taken in the late 40’s, another fine portrait. There are a number of beautiful portraits of Vivien Leigh, another favourite shows her with a mirror image herself, quite superb.

In fact I could go on and on, but unfortunately I can’t mention every picture here. Suffice to say that this is a wonderful exhibition of Angus McBean’s work and I hope that I’ve been able to bring you a flavour of it. I would strongly recommend anyone who is interested in photography to view it. It runs to the 22 nd October, I fully appreciate that not everyone can get to London and I’m pleased to say that the exhibition will be displayed at two further venues in the UK.

Amgueddfa Cymru - National Museum Wales;
from 31st of March to 3rd of June 2007.

If you want to see McBeans work in print, I would recommend Angus McBean Portraits by Terence Pepper, by National Portrait Gallery Publications.

I would like to thank NPG for allowing these images to be reproduced here and also to Neil Evans, Press Officer at the NPG for his help and cooperation.