Sue Flood’s award-winning image of a great white shark is as beautiful as it is unnerving. Here, she explains how she came to capture it. 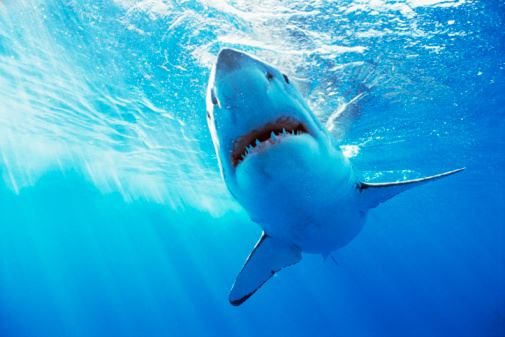 I captured this shot in the waters of the Pacific Ocean near Mexico’s Guadalupe Island, which lies around 150 miles from the coast of Baja California. I was on a five-day diving holiday on board a small boat run by Doc Anes of San Diego Shark Diving, so the trip out to the island was somewhat bumpy. I’d just had a very enjoyable shoot working with Doc for the BBC series The Blue Planet, filming blue and mako sharks with legendary cameraman Bob Cranston, and I was keen to return to these waters to see the most impressive predator in the ocean.

I was travelling with friends Mark Carwardine, Darren Flaxstone and Doug Allan, my then husband. After spending almost five years working on The Blue Planet, I had become hooked on all things marine but had never seen a great white. I was desperate to capture one of these sharks in the water, despite having suffered nightmares for several years as a child after my grandmother took me, at the age of ten, to see Jaws! Darren, a talented editor, director and producer, was accompanying me as he wanted to conquer his life-long phobia before he started working on a new film about sharks.

I was shooting on a Nikonos V with a 15mm lens – in fact, I had two, each loaded with a roll of 36-exposure film. Once in the shark cage, I shot through those two rolls very quickly in the few minutes that the shark was hanging around. I always say that this was the experience that convinced me to switch from film to digital! For this shot, I was keen to show the beautiful, streamlined shape of the shark so I crouched down on the bottom of the cage and shot up towards the surface. A split-second after I captured the shot, the shark bit the cage right in front of my face.

Other than the obvious physical challenge of taking this shot, the main issue I faced was that I was so excited it was very hard to concentrate on my photography. Upon seeing the shot, people often ask if I was scared but I truly wasn’t – just incredibly exhilarated. The great white is such a stunning predator and to see one at close quarters like this was an incredible privilege. I hope that my image encourages people to be impressed by these beautiful creatures as sharks are under threat from over-fishing and hunting. They are, unfortunately, listed as vulnerable by the International Union for Conservation of Nature.

This image required very little in the way of post-processing. The light was just lovely, with the rays of sun coming through the very clear surface water.

I went on to shoot many more images underwater, most notably for the BBC series Planet Earth, where I spent a wonderful ten weeks photographing humpback whale mothers and calves in Tonga in the Vava’u Islands. By this time, however, I was shooting digitally with my Canon in an underwater housing – no more stress wondering if a film shot had worked!

I’m very fond of this shot as it was my first cover image, making it onto BBC Wildlife Magazine and then, at a later date, National Geographic Kids Magazine. It also made it to the finals of the Wildlife Photographer of the Year competition. It was seeing my image on these prestigious magazine covers that gave me the confidence to follow my gut feeling and so I decided to leave my job as a producer at the BBC Natural History Unit in 2005 to concentrate on my stills photography. I was fortunate to be taken on by Getty Images shortly after and I’m very happy with my new career path. I consider myself very fortunate to make a living as a professional wildlife and travel photographer.

I’m freelance and often guide wildlife photography trips for Steppes Travel – I’ve just returned from a three-week trip to the Pantanal in Brazil, and next year will be guiding trips to the South Luangwa valley in Zambia, travelling to British Columbia to photograph bears and humpback whales, and also heading to Madagascar, all of which will be wonderful!

Right now I’m working on my most exciting assignment ever – though this sadly has to stay under wraps for now. I’ll let Wex readers know as soon as I can spill the beans.

Sue Flood is a award-winning professional wildlife and travel photographer, who spent 11 years with the BBC’s Natural History Unit on series such as Planet Earth and The Blue Planet before going freelance. For more information visit her website.

An interview with photographer Sue Flood

How to photograph wildlife in your garden