Diary of a snail shoot

Surely it should have been the easiest thing in the world? All I wanted to do was photograph a snail. I’d had a shot of the mini mollusc in my mind for a while so, Sunday afternoon, just after lunch, I popped out into the back garden to get my pic. Piece of cake, huh? 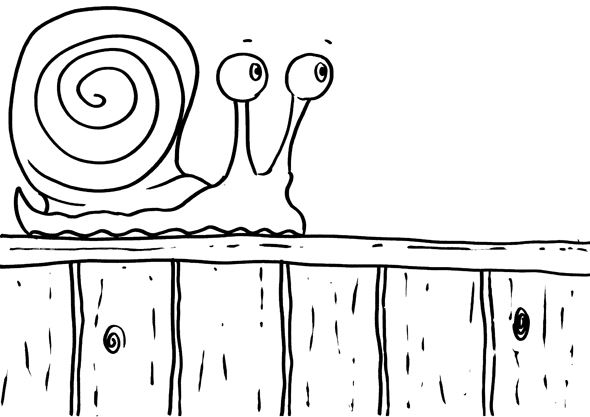 13:10
Still no snails. Checked flowerpots, the back of the rabbit hutch, underneath the kids’ trampoline and around the tomato plants. Not a sausage. Or any snails.

13:15
Pop inside for a drink. Searching for snails in the sun is thirsty work. Watch a bit of Star Trek.

13:40
Success! Find a solitary snail in the deep, dark recesses under the oil tank amongst the leaf-litter and spiders. I hate spiders.

13:41
Notice spider crawling on shoulder. Run round garden squealing until Emily brushes it off. She says it’s tiny. I say it’s the size of a dinner plate. Sit down for a minute or two to recover. Watch a bit of Star Trek.

13:45
Place snail in position on wooden fence, grab my camera and wait. 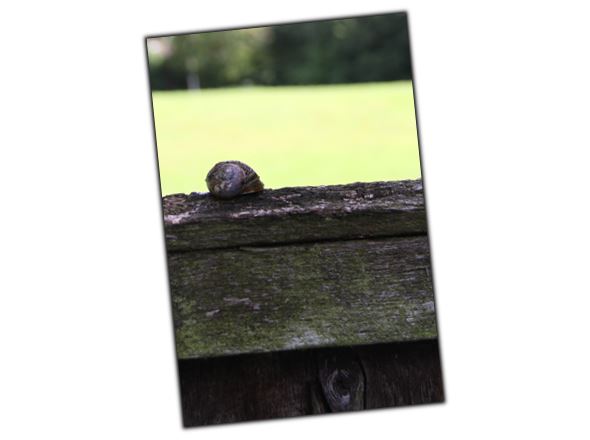 13:50
Nothing has happened. Snail has not moved, or even appeared from its shell. Double check there is a snail in the shell. There is.

13:55
Still nothing. Pop inside to watch last 5 minutes of Star Trek while snail wakes up.

14:05
Next episode of Star Trek has started. Turns out it’s on all afternoon. Snail still hasn’t moved. Suspect it may be dead.

14:10
Whilst checking snail for vital signs notice it’s quite grubby. Give it a quick bath in kids’ paddling pool. Kids not impressed.

14:15
Put snail back on fence and pop indoors to watch some Star Trek.

14:25
Snail is still on fence, but hasn’t budged. Convinced it must be dead. Decide to make best of a bad lot and photograph dead snail. 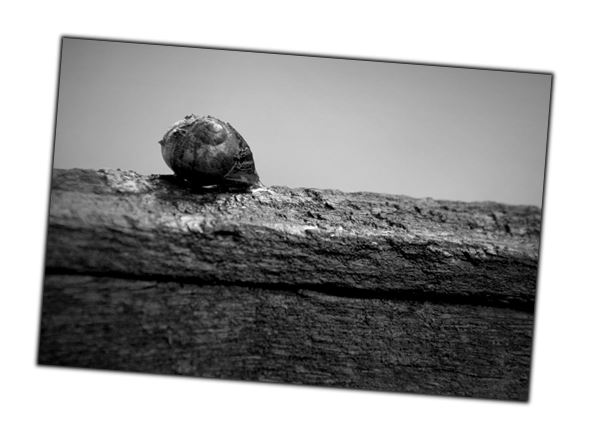 14:30
Get bored of shooting inert dead snail on fence. Go and watch Star Trek and have a cup of tea.

14:45
Still blowing bubbles but no movement. For a second I think I hear the snail quietly laughing. Worried the heat is getting to me. Take picture of bubbling/sniggering snail and go indoors to get out of the sun and watch Star Trek. 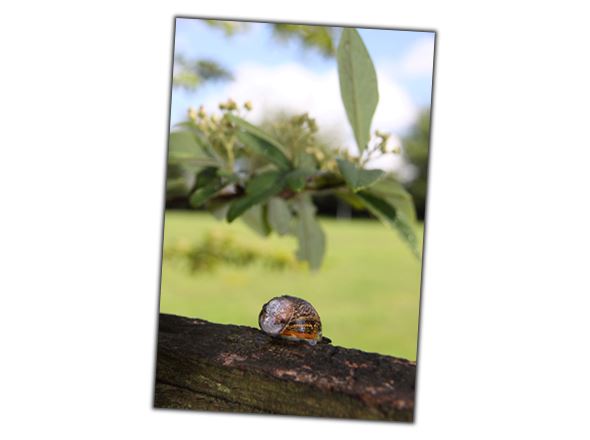 14:45
Snail is still on fence blowing bubbles. Emily suggests attempting to coax snail out of shell with food. Bring it indoors and put it on a slice of cucumber on a plate. Watch the rest of Star Trek.

15:00
One episode of Star Trek finishes, another is about to start. Check on snail. It is alive! It’s out of its shell and has munched its way through half the cucumber slice!

15:01
Pick snail up to put it back on the fence. It disappears straight back into its shell. Bugger.

15:15
Snail is once again resolutely refusing to come out of its shell. Now I know the snail isn’t dead, just stubborn, I get cross. Shout abuse at snail.

15:20
Emily tells me off for shouting abuse at snail. I feel bad and apologise to snail.

15:30
Google “How to get a snail l out of its shell”. Find an old wives’ tale about children singing to snails to get them to come out.

15:40
Get spotted by neighbour singing to snail. Rush back inside to hide and watch Star Trek.

15:50
Neighbour has gone in but snail still hasn’t come out. Take a few shots of shy snail on garden bench. 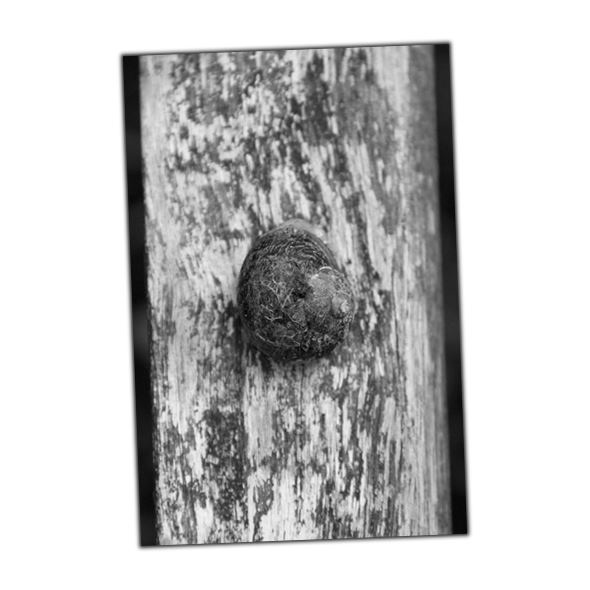 15:55
Sit next to snail on bench and stare at it. Wonder if snail whispering has ever been attempted.

16:00
As the day's final episode of Star Trek starts I struggle to comprehend why this snail isn't budging when earlier in the week I struggled to get from the car to the house without treading on about a dozen of his friends.

16:05
Place snail on small log on lawn. Give it a thorough misting with water from a spray-bottle. Sit next to snail on grass and wait.

16:10
There's the smallest amount of movement – then it stops. Did I imagine it? Spray snail again. 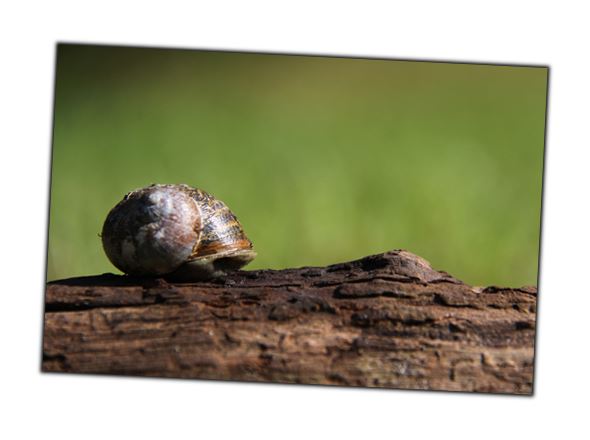 16:15
Sprint indoors, grab camera, sprint back out and get in position just in time to capture snail finally emerging from shell.

16:20
Take a few more photos as snail sets off along the log. He's really shifting now! Try a couple of shots from different angles before performing small celebratory lap of the garden. 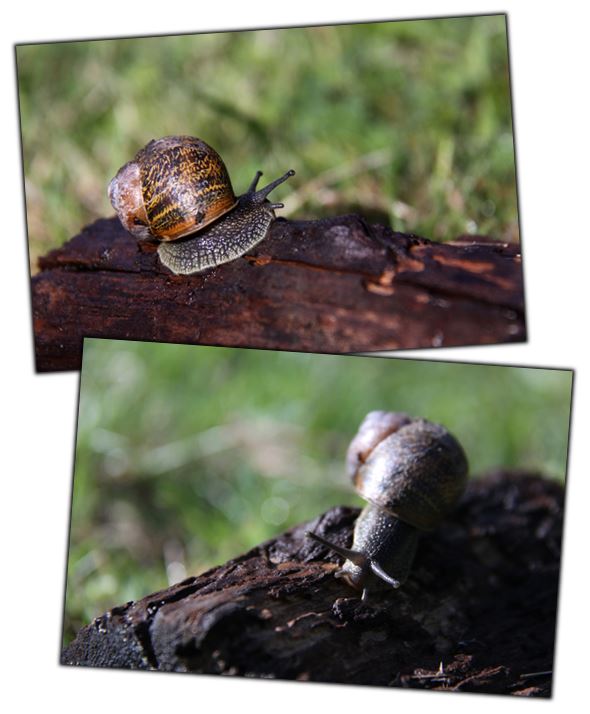 16:25
Brian makes a sudden break for freedom. Despite his surprising speed I take photos as he slithers off log and hides in the grass. Thinks I can't see him. Naughty Brian. 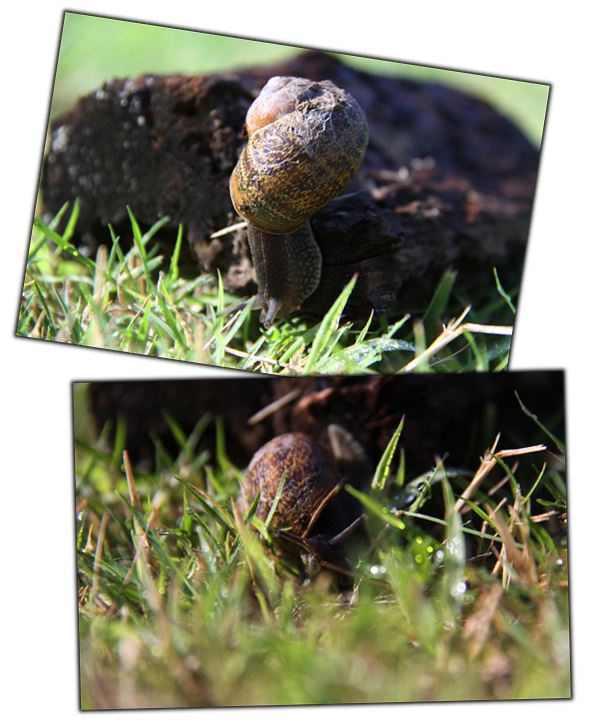 16:30
Brian appears to have had enough of the log. Pick him up and look for a new location. Brian disappears back into shell. Bugger. Again.

16:40
Brian is out of his shell already. Seems like the previously photo-shy snail has got the modelling bug.

16:45
Start shooting again as Brian makes his way up onto the top of the fence. 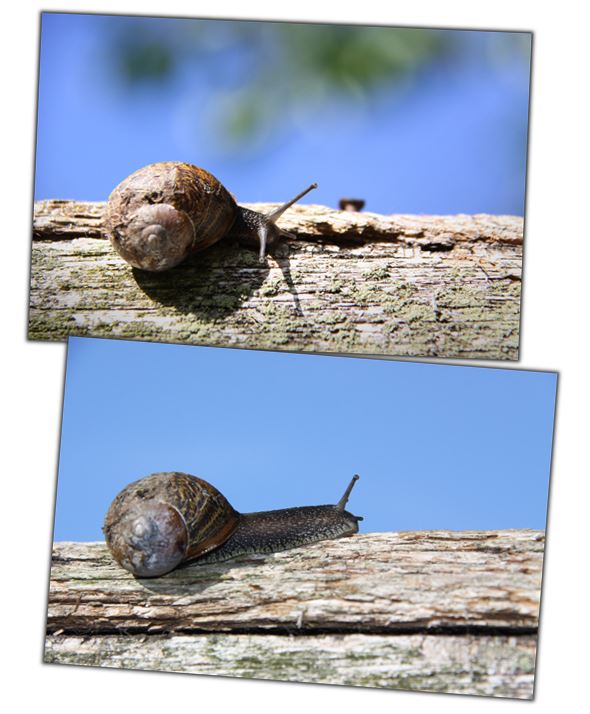 16:50
The hot sun doesn't seem to agree with snails' delicate skin. Brian appears to be slowing down and his eye-stalks are beginning to droop.

16:55
Brian is definitely starting to look tired. Take a couple more shots from along the spine of the fence as he investigates a particularly fascinating nail protruding from the wood. 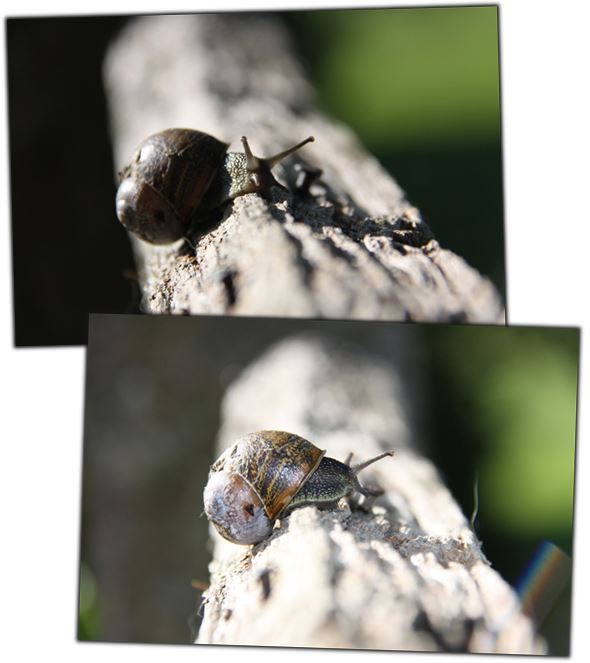 17:00
After just 4 hours, the photo-shoot is done, and so is Star Trek. Brian is given a last refreshing spray and returned to the wild under a shady bush.

I never did the get the original shot that I had in my mind, but then, I never anticipated that shooting a snail would be such a challenge. Still, it a useful learning experience, and I did get a few decent shots of Brian, who is no doubt boasting to his snail buddies about his new modelling career. 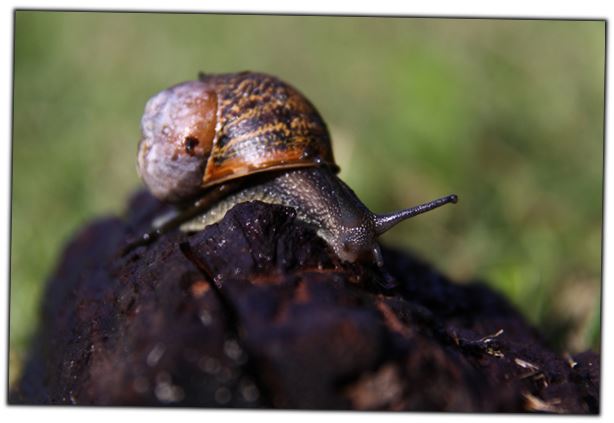