Countless female pioneers have made defining contributions to photography. Jon Devo explores some of the key trailblazers 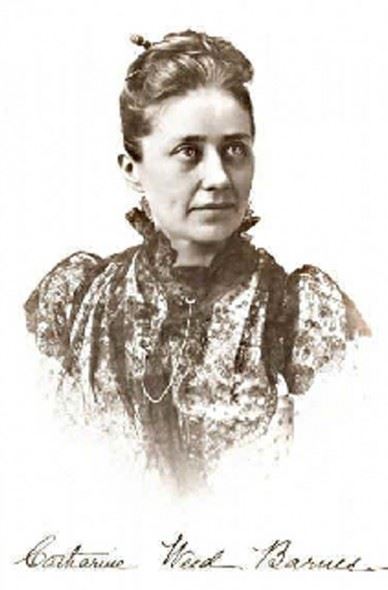 Catharine Barnes-Ward, an American photographer who relocated to England in later life, is said to have taken over 10,000 images using the glass plate photographic technique. Barnes-Ward discovered her passion for photography while travelling with her parents through Russia during the 1880s and turned that passion into a career at the turn of the century. On return to the US, she embarked on building a professional career as a writer and photographer, eventually becoming the editor of American Amateur Photographer magazine.

She spoke often of the importance of making the art of photography reflect the work, and not the gender of the artist.

Rapidly growing as an undeniable force within photographic circles, Barnes-Ward became an active member in a number of associations which had been previously exclusively open to men. Speaking about Ward’s attitude towards the lacking representation of females in the photography world, Margaret Lamar King wrote in the Albany Academy for Girls archive: “She [Barnes-Ward] spoke often of the importance of making the art of photography reflect the work, and not the gender of the artist.” That attitude and her influence helped open many doors for female photographers who were to follow in her wake.

Born Catharine Weed Barnes, Catharine picked up the name ‘Ward’, after marrying British publisher Henry Ward, founder and former editor of Practical Photographer magazine. She collaborated with her husband on many books. 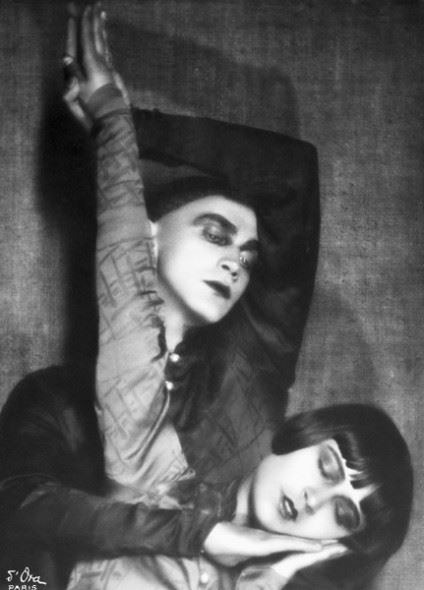 Dora Kallmus, an Austrian native, was the co-founder of the Benda D’Ora Photography Studios in Vienna and later in Paris, way back in 1907. It was one of the first studios to define the concept of house or ‘salon’ photography studios, which were popular meeting places for fashion influencers of her time.

International success and fame followed as Dora, also known as Madame D’ora, became known for her exquisite high-fashion and nude portraiture. Her subjects included many prominent 20th century figures from the performing and traditional arts worlds, as well as intellectuals and writers. D’ora was one of the first photographers to shift their focus away from ‘stiff’ posed images to expressive movement and fashion, at a time when the photographic image began to replace representational images in magazines. Her achievements blazed a trail for other female photographers across Europe, particularly in the field of fashion/editorial photography. 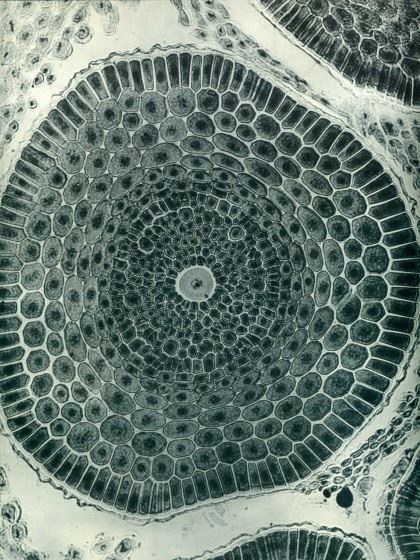 Laure Albin Guillot is one of the pioneers of micro and product photography, but as an artist and a writer on the subject of photography, Guillot is undoubtedly one of the most important names in the field. An enigmatic figure of the early-to-mid 20th century, this independent French photographer rose to prominence on the art scene due to her modern avant-garde style at the forefront of a counter-culture movement to create stylish, artistic photography.

But it was really with her product photography, used for advertising materials by the press and publishing industry, as well as her micro photography, which she dubbed “micrographie”, that her unrivalled technical skills were flexed. Practising many styles including art nudes, landscape, portraiture, still life and candid/documentary-style photography, Guillot was an active leader in her field, becoming an institutional figure by the 1930s. Guillot was an influential member of a number of important photographic societies in France, including the Direction générale des Beaux-Arts of which she was the director. That archive went on to form the foundations of the Ministry of Culture. 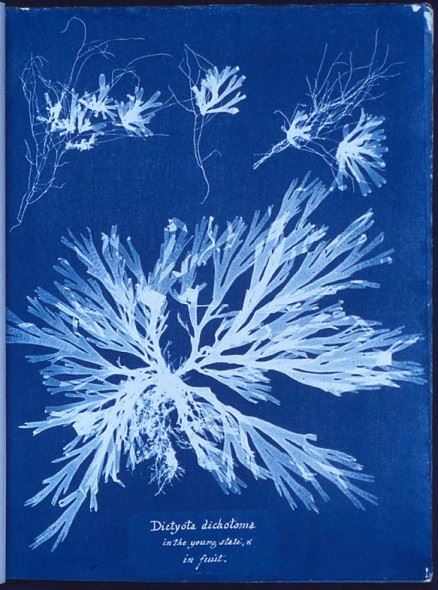 Anna Atkins and Anne Dixon were raised as sisters after Dixon, a distant cousin of novelist Jane Austen, lost her mother in 1811. Aside from their sisterly relationship, the two also shared a passion for botany and with the assistance of Dixon, Atkins created a large volume of photogenic drawings of botanical subjects they collected together using the cameraless cyanotype photographic technique.

Atkins learned about the invention of photography from her conversations with the “father of photography” Sir William Fox Talbot, and was taught the cyanotype technique directly by its inventor, Sir John Herschel, a family friend.

Using the cyanotype method and handwritten texts, Anna Atkins was one of the first people in history to publish a book using light-sensitive materials in 1843, and in doing so pioneered photography as an accurate medium for scientific illustrations. 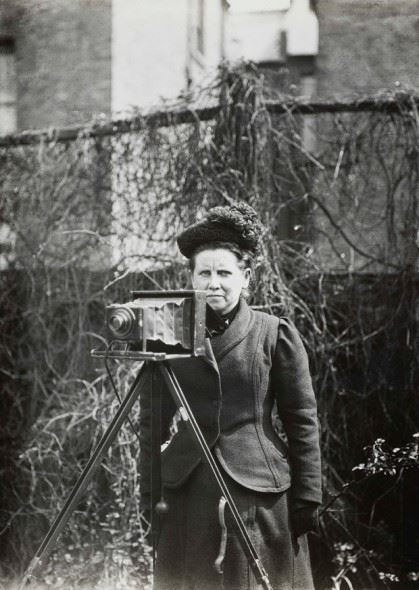 Portrait of Christina Broom circa 1910

One of, if not the first woman British press photographer and one of the pioneers of street photography, Christina Broom was an industrious woman who took up photography at the sprightly age of 40, out of necessity, rather than passion. Following a career-ending injury for her Husband, the Brooms decided to open a family run stationary but decided to take up photography to capitalise on the rising popularity of postcards to bring in more money. At the height of her postcard business, Broom and her 14-year-old daughter Winnie were printing 1,000 images a night.

Broom was unique in her approach and unlike her female contemporaries, who were content to take pictures in their studios, Broom was at home hustling for position in the male-dominated press op scrum and traversed London with her camera, tripod and glass plates strapped to her back. Subjects of her photography included everything from mundane city life and shop keepers, to documenting the Suffragette Movement, members of the royal family and soldiers during the First World War.

Broom was an independent and resourceful woman whose work in photography never had the attention it deserved. Her contribution to documenting some of the pivotal moments in 20th century Britain and breaking down gender stereotypes within the press photography world at a critical time must never be forgotten. 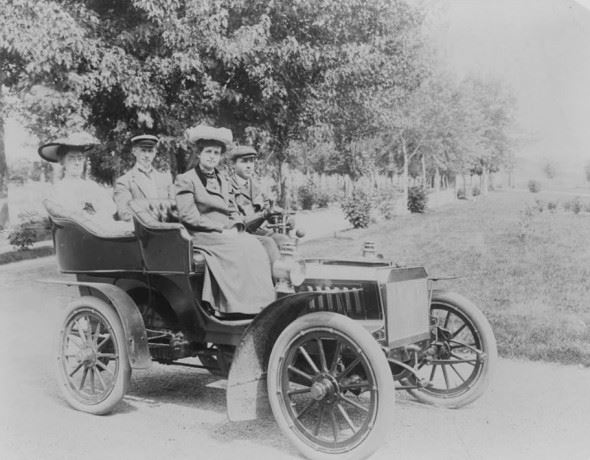 American photographer Frances Benjamin Johnston was one of the leading pioneers of photojournalism and political photography in the late 19th century. Following some time in Paris, where she was one of the first women to study at the prestigious Academie Julien, Johnston returned to Washington DC during 1880 and quickly established herself as a professional photographer, running her own business that grew in notoriety, and gained respect commercially and within artistic circles.

Johnston used her family’s influence (particularly her mother’s who was a respected newspaper reporter) to gain access to some of the most high-ranking political figures of her time. She had access to the corridors of power within the White House from the Clevland to the Roosevelt and Taft administrations, which enabled her to capture priceless historically significant images of first families, and White House visitors and staff.

She was a staunch champion for breaking down barriers and encouraging more women to be involved and recognised in the new field of photography, or ‘pictorialism’ as it was known at the time. Later in her career Johnstone shifted her focus to landscape/garden images, and pioneering archival architecture and documentary photography, travelling widely across the US and Europe for work, research and to deliver lectures on image creation.

Perspective: Why Sexism in Photography is a Bigger Problem Than You Might Think