Editorial: Tribes of Photography – Which Tribe Are You?

Find out which tribe of photographers you belong to with our 100% accurate, scientifically vetted* guide to the main factions… 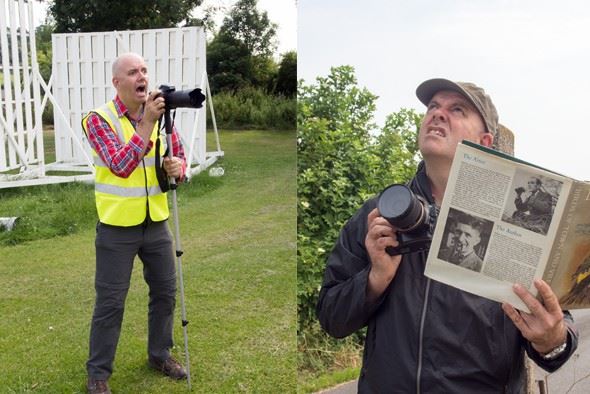 Indigenous people are perennially popular subjects for photographers, as the success of Jimmy Nelson’s book Before They Pass Away demonstrates. The irony, of course, is that photographers themselves also congregate in a rainbow nation of colourful tribes. Here’s a quick and very silly anthropological guide to help you spot the main tribes, and identify which ones you belong to…

Natural habitat: Beauty spots up and down the UK, particularly the Peak District, the Scottish highlands, Northumberland, and a sacred site down on the south coast called ‘Durdle Dor’.

Strange customs and taboos: Landscape photographers have a fetish for boulders, which they get in the foreground of their images at almost every opportunity. Possibly an offering to their gods?

Natural habitat: All over the world, but commonly found in South East Asia (particularly Thailand, Vietnam and Burma) and picturesque European cities frequented by budget airlines.

Natural habitat: Similar to landscape photographers, but also congregate around bird reserves, moorland and the coast.

Tribal markings: As well as expensive outdoor gear, this tribe also has a yen for big telephoto lenses, wax hats, outlandish camouflage jackets, and even Ghillie suits – making them look like a cross between a sniper and something from a folk festival.

Strange customs and taboos: Often seen cursing at the sky as they haven’t got the shutter speed fast enough, or lying prone in undergrowth. Never, ever suggest they simply Photoshop the bird in.

Natural habitats: The ‘hood, whether it be urban centres big or small.

Tribal markings: This tribe does its best to avoid being spotted, so its members favour anonymous looking coats and jackets that can also conceal cameras, baseball caps and running shoes (should they get chased by a security guard).

Natural habitat: Traditionally found around churches, temples, registry offices and wedding venues up and down the country, but can pop up in all manner of places now licensed to marry (even skydiving events, if they’re unlucky).

Tribal markings: Depends on whether they’re seasoned veterans or ‘weekend warriors’, but cheap suits and shoes chosen for comfort rather than style are tell-tale signs. Also watch out for bulky bags that annoy the other guests, crumpled shot lists and forced smiles.

Strange customs and taboos: Suddenly start sounding like drill sergeants when they need to organise group shots, and often display hostility to another type of photographer called an ‘Uncle Bob’.

Tribal markings: Easily spotted by their unfeasibly long lenses and monopods. Also favour bulging photographer’s vests or tabards. Despite hanging around sport venues all day, tribe members rarely look like they do much sport themselves.

Strange customs and taboos: Where they are allowed to stand is a sure sign of their seniority and status within the tribe. Often found yelling at their phones as a significant other has called seconds before an unforgettable moment. Motorsports specialists are often hard of hearing.

The Baby and Pet Tribe

Natural habitat: Studios and domestic premises all over the UK.

Tribal markings: Favour colourful, casual garb that makes them look like children’s TV presenters. Often carry around a wide range of props to keep young kids and pets happy, including plenty of confectionery and ‘poop’ bags.

Strange customs and taboos: Can find it hard to communicate with other adults after spending all day with their bored, easily distracted subjects. Highly skilled at ‘oohs’, ‘ahhs’, and whistles.

The Plant and Flower Tribe

Tribal markings: Sunhats, waterproof trousers and knee pads. Also favour tripods and a peculiar fetish object called a ‘Wimberly Plamp’, designed to keep plants still in the breeze. Horticultural society memberships aren’t a necessity but they’ll have them anyway, especially considering how often they’re lovingly given as gifts from unimaginative friends and family.

Strange customs and taboos: Often found crouching in the undergrowth, peering at foliage through macro lenses. Highly skilled at shooing away slugs and curious dogs.

Tribal markings: Favour funky, relaxed, slightly hippyish garb, in homage to tribal patriarchs David Bailey and Austin Powers. Male members of this tribe often have a slightly sheepish and guilty look, the result of long years of justifying this pursuit to suspicious partners. These photographers prefer their work be referred to as art rather than photography.

Strange customs and taboos: Can be heard uttering curiously dated phrases like ‘Oh yes, that’s perfect, simply beautiful!’ And they often have a especially curated music playlists to help get clients ‘in the mood’.

*none of that is true

Editorial: The five worst photography habits and how to kick them

Editorial: How can you be a more original photographer

Editorial: Can you really teach somebody to be a creative photographer?