I was talking to a group of students a few weeks ago, something I always enjoy doing. When I asked them to name some photographers whose work they admired, I was very pleased to hear Irving Penn mentioned. Penn has always been a favorite photographer of mine, a photographer whose work I’ve followed since the late seventies. His career has spanned nearly seventy years and he is famous for his work in portraiture, fashion and still life.

I particularly love Penn's portrait work because of his ability to convey something about his subject, his ability to bridge the gap between the viewer and the sitter and his ability to create stunning compositions that have stood the test of time. It’s not easy to sum up the importance of Penn in just a few pages as he shot virtually non-stop from 1944 until his death in 2009, producing an enormous body of work. I think that he’ll best be remembered for his work for Vogue magazine, photographing writers, painters, actors and dancers, nearly all in the sparse style that he made his own.

I was excited to hear that there is an exhibition of Irving Penn’s work currently showing at the National Portrait Gallery in London. The gallery is showing over a hundred beautiful black and white portraits, spanning the seventy years of his life. The work is very well laid out, decade by decade. Showing his work in this way, in chronological order, lets you follow the photographer through his life, allowing you to see the subtle changes in his style throughout those years. 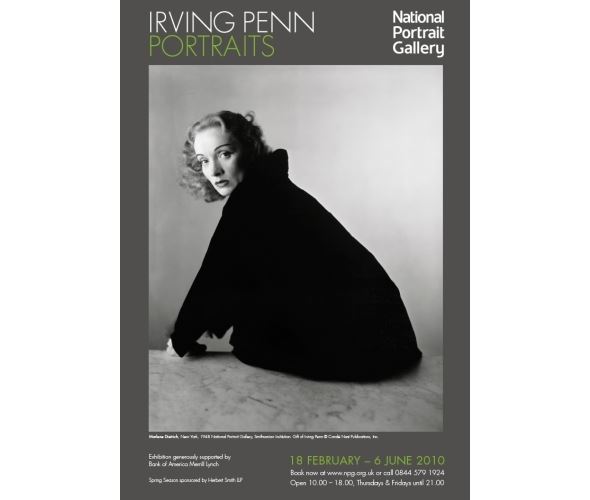 Irving Penn was born in 1917, in New Jersey and is the elder brother of film director Arthur Penn. He attended the Pennsylvania Museum School of Industrial Art in Philadelphia (now the University of the Arts) from 1934 to 1938 where he studied painting, graphic and industrial design. It was here that he studied under the famous Russian painter Alexey Brodovitch, who was also a photographer and graphic designer working at Harper’s Bazaar.

It was Brodovitch who spotted Penn’s talent and invited Penn to New York to work unpaid in his summer holidays for Harpers Bazaar. When he completed his education, he moved to New York to become a freelance designer for Harpers. He began working at Saks on Fifth Avenue as director of advertising, but left to become a painter in Mexico, returning to New York in 1943. He was offered a job as assistant art director at Vogue magazine, remaining at Vogue until he set up his own studio in 1953.

When we take portraits today, we think it only natural to shoot subjects against a white, grey or black background. However, Irving Penn was one of the first photographers to adopt this style, rather than shooting his subjects in the more elaborate studio settings favored at the time. He built and arranged angled backdrops to form a ‘vee’ shape in which he shot his subjects. It was this rather sparse style of portraiture that made him different from the other photographers of his day.

In his early years in the mid to late 1940’s, Penn shot a great deal of his work in this plain studio setting. Most of his portraits were shot full length with the subject often between the two angled boards, naturally leading the eye towards the subject as the perspective narrowed. This earlier work of Penn is in contrast to his later work, where he mainly shot the head and shoulders of the subject, getting in really close and creating some of the finest portraits of the era. 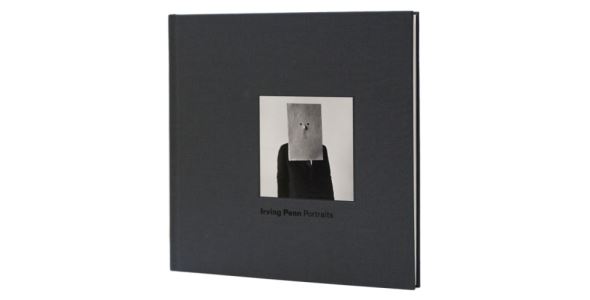 The exhibition starts with some of this early work shot in the 40’s, the subjects’ photographed full length within those boards. Images of Spencer Tracy, Marcel Duchamp and Wallace Simpson are typical and shot using a bank of tungsten light to simulate daylight. As you move through to the 50’s and 60’s so Penn’s style changes with some beautiful head and shoulder portraits of Pablo Picasso, Audrey Hepburn and Tennessee Williams.

The rest of the portraits on show are mainly head and shoulders, all beautifully composed and cropped. They really are a master class in portraiture and Penn’s light touch rarely disappoints. Just because he photographed ‘famous’ people didn’t mean his images were automatically going to be a success. Looking at the portraits at the exhibition, it seems to me that he never stopped trying to achieve perfection.

To achieve that perfection, Penn also taught himself long forgotten darkroom techniques and processes to enhance his work. The processes included applying platinum rather than silver on the printing paper that produced wonderfully smooth and more permanent, long lasting tones. After he had perfected this difficult process, he began to reprint a lot of his earlier work, producing prints of amazing depth and luminosity.

You certainly notice those qualities, especially the different tones within each print when you view Penn’s images close up, they really are superbly printed and I would love to own one! I could go on and on, but I hope that I’ve managed to convey some of my enthusiasm for Penn’s work.

It really is most unfortunate that I am not allowed to reproduce any of his images here. My colleague at the National Portrait Gallery who has previously allowed me to use images from other shows I’ve reviewed is under very strict instructions this time. She told me that no images from the exhibition would be available under any circumstances, not their decision, but the Penn foundation or trust I’m afraid. This does seem a little odd since most of Penn’s most important images are freely available to view on Google! 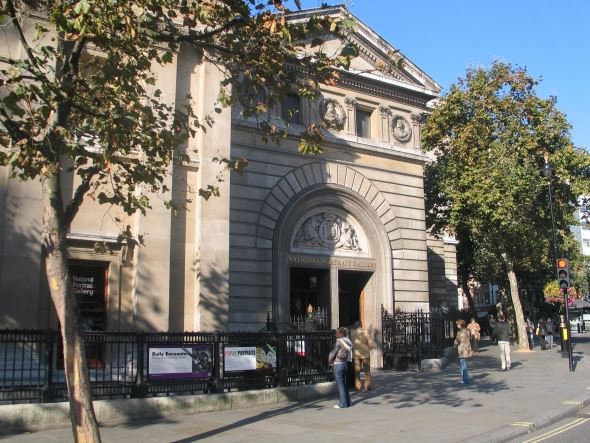