Photographing the moon landing | The Hasselblad cameras of Apollo 11

How Hasselblad and ZEISS hitched a ride on Apollo 11’s Saturn V, and documented one of the most pivotal moments of the 20th century


Neil Armstrong stepped from Apollo 11’s lunar module on July 21 1969 and in doing so became the first human to set foot on the moon. The astronaut famously immortalised the moment as a “giant leap for mankind”, but it also represented a huge milestone for photography.

A television audience of up to 650 million watched as Armstrong and fellow crewmember, Buzz Aldrin, hoisted the American flag, collected precious rock samples and took what would become some of the most widely viewed photographs in history. But, have you ever stopped to think about who supplied the equipment that was used?

To celebrate the first moon landing’s 50th anniversary, Hasselblad has re-published its original moon landing press release from 1969. Here’s what we found out about one of the greatest achievements in photographic history…

The story starts back in 1962. NASA was looking to improve its photographic arrangements and astronaut, Walter Schirra, suggested that legendary Swedish camera manufacturer, Hasselblad, might be the way to go. Walter had joined NASA in 1959, as an astronaut for the United States’ first manned venture into space, Project Mercury.

He subsequently flew in both the Gemini and Apollo programs, and is famed for being the only astronaut to have flown in all three programs. But crucially, he was a keen photographer and a Hasselblad 500C user. NASA took Walter’s suggestion on board and purchased several 500C cameras; Hasselblad was destined for the stars.

NASA was looking to improve its photographic arrangements and astronaut, Walter Schirra, suggested that legendary Swedish camera manufacturer, Hasselblad, might be the way to go.

Hasselblad’s first venture into space would be aboard Schirra’s Sigma 7 on the Mercury-Atlas 8 mission. Rather than use a stock camera, the 500Cs had to undergo a number of modifications. Each body was stripped of its leather cover, reflex mirror, auxiliary shutter and viewfinder to reduce weight. The souped-up cameras also housed an extended film magazine that could produce 70 exposures (instead of the usual 12) and the device was painted matte black to reduce reflections when shooting through the window of the Sigma 7.

Schirra’s voyage took place on October 3 1962. The mission proved successful. Sigma 7 orbited Earth six times and Hasselblad had proved its worth. If the United States managed to place a human on the moon, a Hasselblad camera would be there to document the occasion. 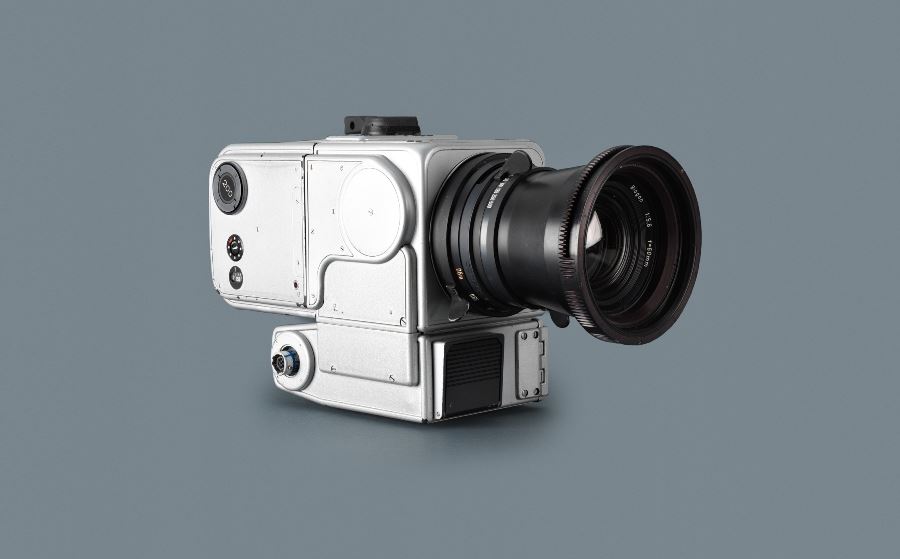 The first camera on the moon

Just over eight years after US president John F Kennedy urged Congress to support plans to put a human on the moon “before the decade is out”, the Apollo 11 lunar module (the Eagle) touched down on the celestial body’s surface. The crew was equipped with two cameras: a Hasselblad Data Camera (HDC) and a Hasselblad Electric Camera (HEC). The former was paired with a ZEISS Biogon 60mm ƒ/5.6 and the latter was attached to a ZEISS Planar 80mm ƒ/2.8.

The HEC was used to photograph from within the Eagle, and the HDC accompanied Armstrong and Aldrin as they explored the lunar surface on foot. Today, most professional photographers carry a second body, an external hard drive and often enjoy dual storage slots. The Apollo 11 crew was tasked with documenting one of the most important examples of human ingenuity in history and had no backup camera. Hasselblad had to provide the goods. 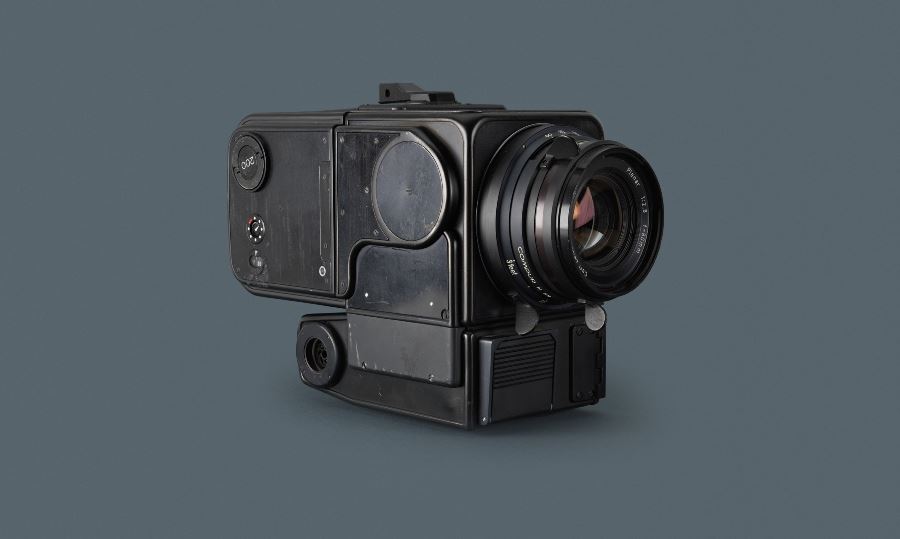 Hasselblad Electric Camera (HEC). The large square button below the lens is the shutter.

The Apollo 11 HDC was better equipped for the task than the 500C Walter Schirra had taken into space more than six years previous. Thin-base Kodak film had been created specifically for a much-improved magazine, with 200 exposures. According to Hasselblad: “Installed in the HDC was a Réseau plate, which optically imprinted fixed cross-marks allowing for photogrammetric measurements to be made from the resulting negative.”

Additionally, and in order to cope with temperatures of -65° C to 120° C plus, the HDC was given a silver paint job. The HDC was attached to the chest of Armstrong’s spacesuit and featured a large shutter button beneath the lens, providing easy access when operated using clumsy spacesuit gloves. The images Armstrong took are some of the most scrutinised images in history, and the most famous is a portrait of Aldrin, with Armstrong and the Eagle clearly visible in his reflective visor.

If you’re wondering what happened to the HDC and HEC, they’re still on the moon. In a bid to remove as much weight as possible for the return journey, the film magazines were retrieved, and the cameras and lenses were left on the lunar surface. In fact, the five other Apollo missions to land on the moon would repeat this practice. According to Hasselblad, 12 cameras still reside on the moon. However, a Hasselblad camera did return to Earth with the Apollo 11 crew...

Armstrong and Aldrin will always be remembered as the first humans to walk on the moon, but the third Apollo 11 crew member, Michael Collins, played an equally important role. While the Eagle landed on the moon, Collins piloted the command module, Columbia, which the crew would use to return safely back to Earth. Collins orbited the moon a total of 30 times before rendezvousing with the Eagle.

Once Armstrong and Aldrin had transferred back into the command module, the lunar module was discarded and the crew made the return flight back to Earth. However, among the various rock samples and necessary items of kit was a third Hasselblad HEC. This matte black device had been assigned to Collins for use in Columbia, hence it making the returning journey back to Earth. This is the camera that inspired Hasselblad’s recently announced 907X Special Edition, a limited edition moon-landing themed variant of the yet to be released modular camera announced last month.

So there you have it; Walter Schirra’s passion for photography set Hasselblad on a course to the stars. Credit to Hasselblad and ZEISS for successfully documenting one of the most important events in human history – not to mention delivering some of the greatest photographs in the process. It’s officially been five decades since the pairing first journeyed to the moon, how long until they set a course for Mars?