In the final instalment of his three-part series on his Peruvian adventures, Tom Mason takes a night walk in the jungle and is confronted by a sobering sight. 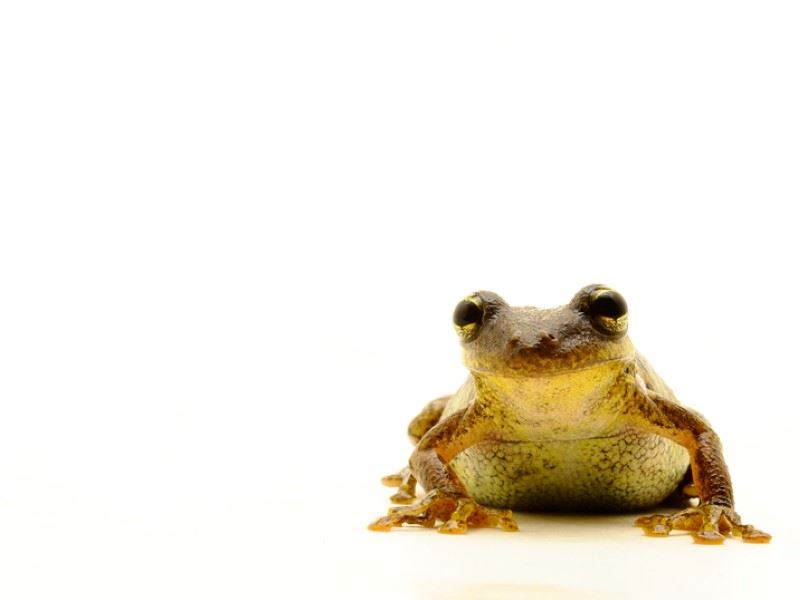 After another four hours in the van, we made our way down into the Amazon basin. Swallow tailed kites circled above our heads as we took to the water for the next leg of our Amazon adventure.

I’m not afraid of boats; I’m a good swimmer, yet I have never been so worried. I climbed into the motorised canoe knowing that the bag on my back full of cameras and hard drives was easily in excess of 25kg. If, for whatever reason, I was to fall into the water, I knew I wouldn’t be able to keep the bag afloat. As a precaution, I removed my back-up hard drive and placed it in a dry bag, being sure to fill it with a generous helping of air to provide buoyancy. The rest of the team looked at me like I was going a little over the top – but I didn’t want to take the risk!

The boat ride was a great way to see the rainforest. Macaws, Toucans and other exotic species flew across the river, while on the banks we spotted river turtles and black caiman, and even managed some close-up views of capybara.

Dawn in the rainforest, an amazing scene to wake up to every morning

The weather, like our transport, had also changed. Gone was the cold spell of the friajes, replaced by the equatorial sun that was now beating down overhead. The boat ride felt cool but this masked the true heat of the day. It was hot but wearing short sleeves was a no go, not because of the risk of burning but due to the sand flies. Every time we stopped to have a break they attacked, and I ended up with hundreds of tiny irritations on any skin that had been exposed – a painful reminder of the amazing number of insects found in the region.

After another hour or so in the boat we arrived at our destination, the Manu Learning Centre in the heart of the rainforest. The composition of the rainforest landscape had also changed, with the forest far more sparse and with room to move between the trees – a huge contrast from the claustrophobic feeling in the cloud forest. The trees were also a lot bigger, some reaching eighty meters or so in height, with buttress roots that would require at least fourteen human arm spans to encircle. Such a vast natural structure was an amazing sight, one unlike anything I’ve ever witnessed. 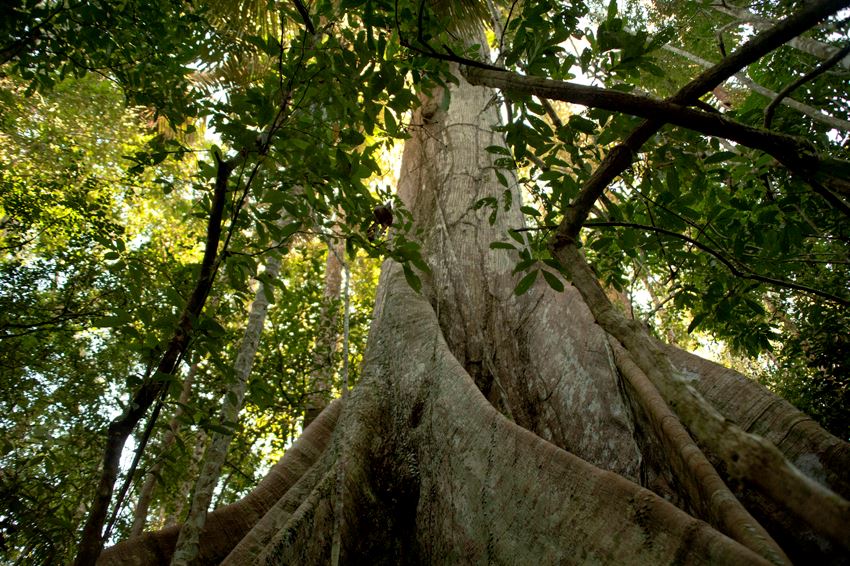 Buttress roots of one of the emergent trees

Walking through the forest, we suddenly heard a crash above our heads. Looking up into the moving canopy, we found a troop of spider monkeys making their way through the forest. Watching them was remarkable; their movements were so reminiscent of human behavior, as they walked and swung through the trees. It truly brought home the relation between ourselves and these, our distant cousins, as they made their way through the tree tops in search of food. After half an hour or so we lost them in the canopy, so we headed back to the lodge for dinner. With dinner out the way we got changed and prepared for a night walk in the jungle, with the hope of finding some additional nocturnal wildlife.

On emerging into the night the first thing we noticed was the sky, alight with the glow from a million stars glittering above our heads. The light pollution is so minimal in the region that the milky way is visible to the naked eye. The view was like nothing I have ever seen before, a journey into a totally different world. The vast nature of what we could see was almost incomprehensible, as I stood recording it all with numerous long exposures. 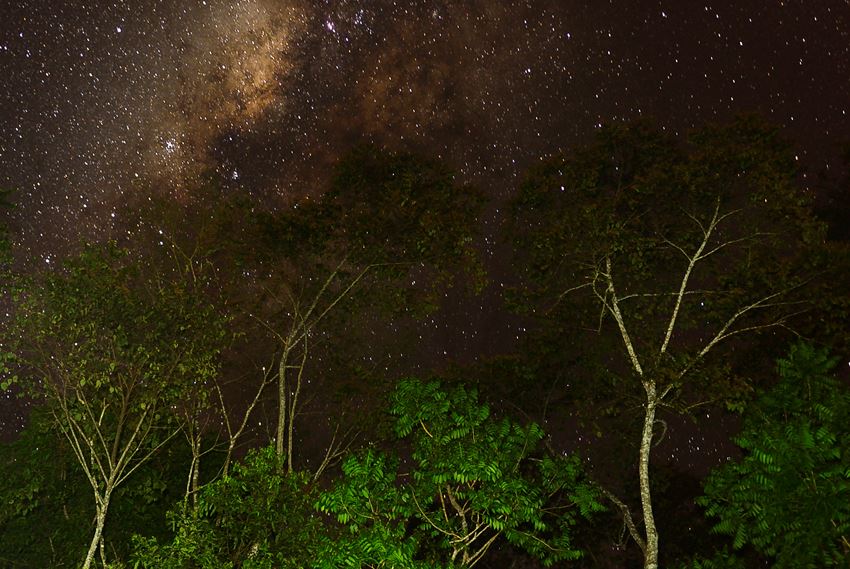 The Milky way over the rainforest, a stunning view that I’ll never forget

Still overwhelmed by the magic of the sky, we managed to pull ourselves away to head off into the jungle, head-torches on and eyes peeled. Only a few minutes later, we stumbled across our first find, a gorgeous whip snake coiled on a low shrub. Continuing further we started to find tree frogs and spiders, before discovering plenty more. The forest was alive with the sounds of frogs and insects; scanning with a head torch quickly identified their locations, before we set about lighting them creatively to produce the photos we were after. Personally I didn’t use very much flash, choosing instead to work with a number of head torches – some still attached to their owners – to produce the effect I wanted. Around every turn there was a new subject to photograph: lizards, frogs, spiders – we found them all! 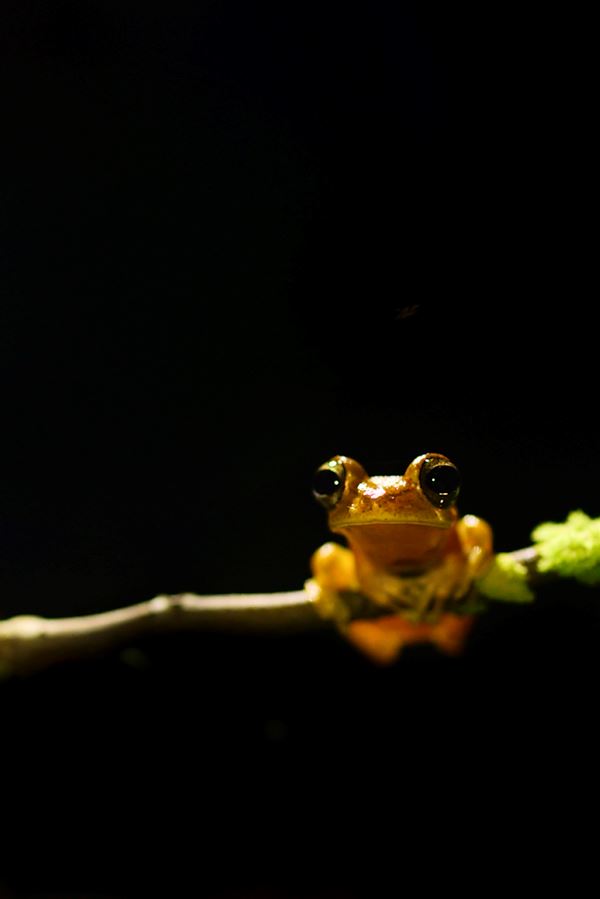 One of the tree frogs found on our night walk. I used a number of head torches in order to light this wonderful little subject

Once deep in the forest, our guide told us that he wanted our group to experience a true night in the jungle. A little reluctantly we all followed his instructions and turned off our headlights, plunging ourselves into complete darkness. Trying to see the next member of the group, who was merely a few feet from me, was practically impossible. It was an incredible feeling of isolation, with the buzz of the jungle and the sounds of movement all around us, as well as the fear of unknown dangers that could be a few feet from our group. We switched our lights back on and continued our adventure, stumbling across huge numbers of frogs as we made our way back to the camp. It was an experience like no other!

The next morning would sadly be our last in the jungle, but still we were all keen to pack it to the brim before reluctantly having to make our way home. Once again we were up before dawn, racing upstream to one of the largest clay licks in the area. As we arrived at the hide, the sounds of the parrots and macaws rang out from all around. The flashes of green and blue of the blue-headed parrot flocks was an impressive sight, along with the elegant red and blue macaws that came in pairs or threes. 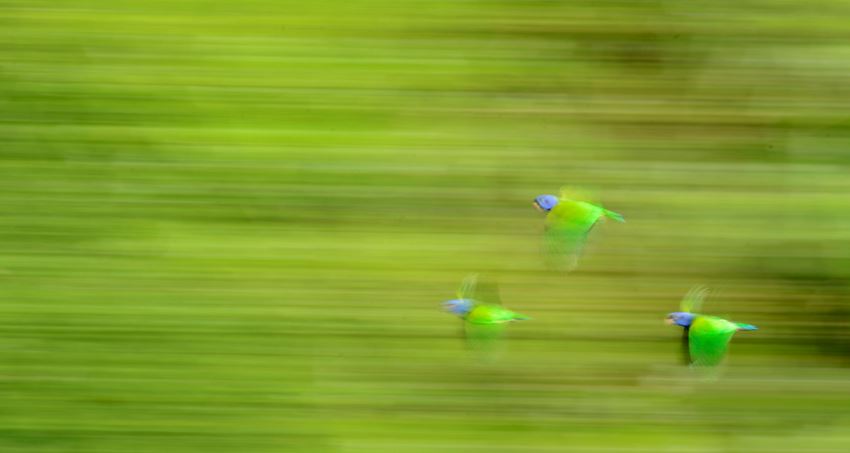 Our guide explained how the macaws would pair for life, only ever mating with one partner, raising a single chick each year. For the rest of the time, unless with young or at the clay lick, they would only ever be seen in their pairs, truly devoted to their partner. I was about to ask what would happen were one to die, but my guide seemed to read my mind and told me that the other would simple live out the rest of its days alone, never replacing its lost partner. Till death do us part – true romance indeed.

After a few hours at the clay lick we headed back to the boat for the start of our long journey home. A four-hour boat ride, followed by an hour in a taxi, followed by another boat ride, before finally getting into a van for the last eight-hour drive back to Cusco.

As we drove out of the jungle we entered a natural park. As we drove on, the forest started to thin and the signs of deforestation were prevalent as we made our way back into the Andes. Fires burned through the native trees to make way for grazing or farming, and houses started to spring up, making the human footprint more evident. It was depressing to see this pristine wilderness being destroyed as the locals cut it down in order to survive, but could I really cast judgement? We in the UK burnt down and destroyed practically all of our own native forest to fuel our own development. An interesting fact to ponder is that it would take 60-100 years to regenerate a section of rainforest, but it would take 300+ years to replace a section of our own ancient oak woodlands. So which has actually had the biggest environmental impact?

A sad but important reminder of the destruction caused by continued deforestation, something that’s being tackled through conservation efforts in the region

A sad sight to see the rainforest burn, but with the constant efforts of conservation in the region and a growth in eco tourism, things are changing for the better. In Peru, they are starting to see the true value of the resource they have and how cutting it down is a highly unsustainable approach to funding future development. Illegal logging and hunting are still prevalent problems, but with the right help, the rainforest will hopefully be with us for many centuries to come.

As experiences go, visiting the rainforest was one of the most memorable of my life. I’d like to say a huge thank you to The Crees Foundation who provided me with this incredible opportunity. The staff and guides were amazing to work with and I couldn’t have asked to share my journey with individuals any more inspiring and extraordinary. The Amazon was amazing and I will certainly be going back again!

Tom Mason went to Lima with the Crees foundation

Tom Mason in Peru: Part 1 – Into the Andes

Tom Mason in Peru: Part 2 – Into the Amazon Rainforest