A reef shark cuts a path through the water in Claudia Pogoreutz’s spectacular prize-winning image. We get the story behind the shot 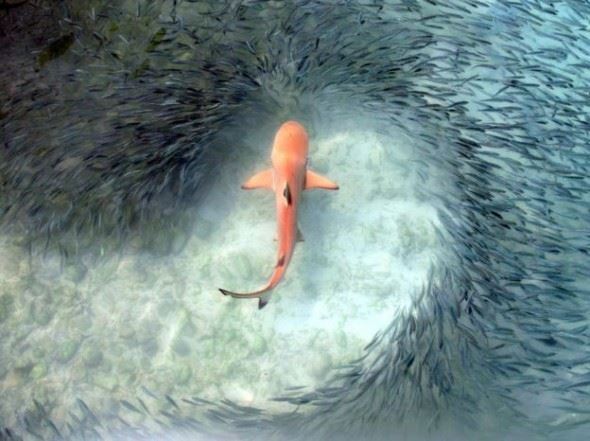 The Royal Society Photography competition, celebrating a successful inaugural year, is all about exploring the power of photography to communicate science.

Claudia Pogoreutz’s image, winner in the “Behaviour” category, fulfils that brief with style and substance. It depicts the contrasting behaviours of a black-tip reef shark and a shoal of tropical clupeid fish, an uneasy interaction between predator and prey as feeding time draws near.

We absolutely love this image, and were thrilled when Claudia agreed to tell us more about it…

“The image was taken on 12 June 2012, at the back reef area of the Kuramathi Island house reef, North Ari Atoll, Republic of Maldives.  The fish starring in this shot are a juvenile black-tip reef shark and a school of unidentified tropical clupeid fish. The latter are related to herrings and pilchards. I wasn’t studying them, but the clupeids would just gather in numbers of thousands in only ankle- to knee-deep water just off the beach, where they were easily accessible for me.”

On the day of the shot

“I just happened to be at the beach, when I noticed this massive aggregation of small silvery fish glistening in the bright tropical sun. At that time I was still a fish biologist, and was fascinated by the coordinated behaviour displayed by the schooling fish, so I brought my brand-new camera along for documentation.”

“As I arrived there, I found I wasn’t the only visitor. Dozens of juvenile black-tip reef sharks – every single one measuring less than a meter in length – were placidly cruising amidst the thousands of glittery clupeids. When a shark came along, the dense clupeid school would part around the shark, and smoothly swim around it to keep a distance from the predator.”

“The actual predation event wouldn’t happen for hours – all of a sudden one single shark would strike, and cause a feeding frenzy among its conspecifics [members of the same species]. This would subsequently trigger a flight reaction in the clupeids, who would even accidentally dart out of the water and end up flopping about on the beach, where they would be gobbled up quickly by grey herons. Who would expect so much drama on a beach?”

“While I enjoy taking pictures to document biologically interesting observations, I do not have a lot of experience with the technical challenges behind photography. The only planning that went into this specific image was figuring out from which angle the image would turn out nicest – while standing on the beach, right where the waves were lapping the sand, or off the jetty leading to the water bungalows. The winning picture was taken off the jetty while this single shark was just passing right under me, creating this surreal impression of an aerial photograph.” 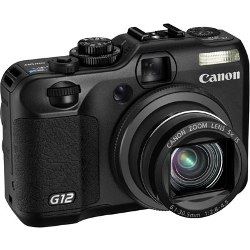 Claudia captured this image with a Canon PowerShot G12.

Claudia Pogoreutz is a PHD candidate at the Leibniz Center for Tropical Marine Ecology. See more at her ResearchGate profile.