Canon has announced a New Years gift for all the L-series addicts out there: A shiny new 70-200mm f2.8L IS II USM EF lens, featuring a revised optical design, optimised AF performance and reduced minimum focus distance to 1.2m (the original was 1.4m).

The revised optical design of the EF 70-200mm f2.8 L IS USM II incorporates a new fluorite element and one additional ultra-low dispersion (UD) element, boosting the count to five. Further internal changes include a faster CPU, running an updated AF algorithm which makes the autofocus “faster and quieter” – a perfect match for the top-notch AF system found in the EOS 7D and 1D Mark IV digital SLRs.

Image stabilisation (IS) is now 1-stop more effective than the original 70-200mm f2.8L IS, capable of compensating for camera shake at shutter speeds up to 4-stops slower than normal. Good news!

Just to round-off an impressive list of upgrades, the new 70-200mm f2.8L IS II also incorporates an updated external design: The lens controls have been made shallower, to prevent accidental changes, and the MF ring has been beefed up to improve accuracy whilst manually focusing. 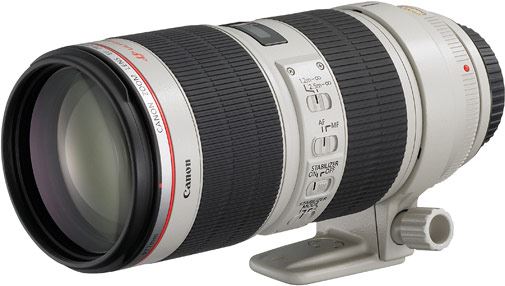 Now it’s time to make sure you’re seated and not using a laptop or an iPhone that you can drop in disbelief. The suggested retail price for this new professional workhorse is an eye-watering £2,799.99. There’s always bound to be a premium to pay for the final pixels of unbelievable quality, but even we have to say, that is quite a shock!