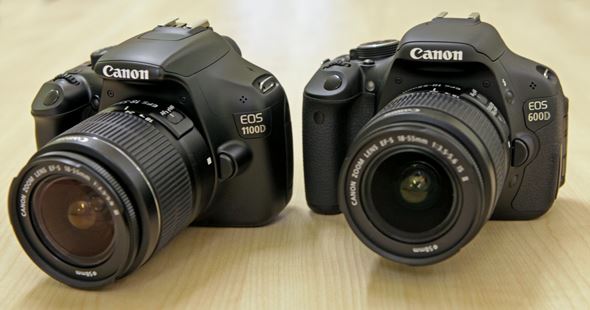 This morning (7th Feb) Canon have announced the introduction of TWO new digital SLR cameras into their EOS line-up. They've also announced a couple of new lenses and flashguns, but those are for another post.

As with the launch of the 60D, I was invited to Canon UK's HQ in Woodhatch to see what the new models would be and, more importantly, have a little play with them.

- body only RRP £679
The introduction of the 600D sees the older 500D disappear from Canon's camera range, but the 550D remains, with the 600D sitting just above it in the EOS hierarchy. When the 60D was launched last year, there was some discussion as to whether there was really enough room between the 550D and the 7D to warrant another model. As it turned out, there was, and Canon had clearly done their homework. But surely there's not enough space between the 550D and the 60D to wedge a new model into? Really? 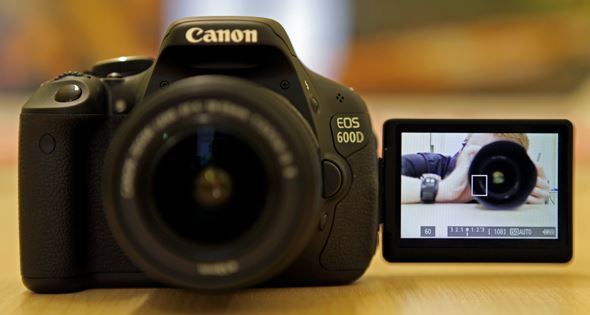 There are certainly some similarities between the new 600D and the 550D. They both have the same 18 million pixel sensor, Digic 4 processor, frame rate and AF system. They also both offer full 1080 HD movie recording. The new 600D and the existing 550D also share several key accessories, including the LP-E8 battery and the BG-E8 battery grip, although, and I think it's fair to say this, as anybody is unlikely to be upgrading from the 550D to the 600D, the fact that these add-ons are shared is not all that important.

So that's the similarities ticked off, but clearly there must be a reason for the introduction of a new SLR, so what are the key differences between the 600D and its lesser sibling, the 550D? And for that matter, just how close is it to the 60D?

Vari-angle LCD screen
Hands up who didn't see this coming - nobody? Thought so. The 600D's tilt-able, swivel-able, million dot, 3:2 ratio LCD screen has been lifted directly from the 60D and bolted on to a xxxD body. It's as big, bold, bright and as easy to use as it is on the 60D, but because the 600D is just a little bit more compact, it makes the screen look even more impressive. Many users (myself included) who were sceptical about the need for a fold out screen on an SLR have found their opinions swayed simply by the convenience that it added to the 60D and I've no doubt that it will prove a particularly popular feature on the 600D. 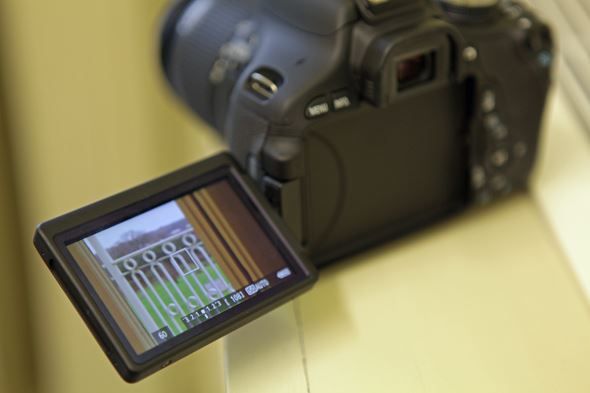 Built-in Speedlite transmitter
Ok, if you saw THIS coming then you are now officially in charge of picking my lottery numbers. Canon have added a built-in Speedlite transmitter to the 600D - the first xxxD series EOS to offer it. In fact, the 600D is only the third ever Canon EOS to feature a built-in Speedlite transmitter, with the 7D and 60D being the other two. Because the 600D is aimed at the enthusiast photographer who knows how to wield a camera in anger but may also be learning and developing their skills and techniques, the 600D features an Easy Wireless Flash Shooting mode that allows the user to simply turn on wireless flash shooting, place their wireless compatible Speedlites in place and start shooting, taking all the hassle out of the set-up. As many photographers are still a little nervous about flash use, this is nothing short of a God-send. 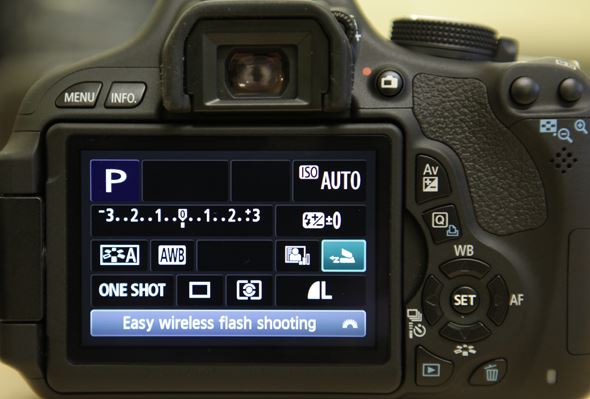 Feature guide
The 600D sees the introduction of the Feature Guide to the xxxD range. Put simply, the feature guide is a, umm, well, a guide to the camera's features. As you change modes and settings the camera pops up a helpful little guide to what the function you've just chosen is and what it does. Again, this is a great addition for those who are making their first tentative steps into the world of digital SLR photography, and also for those who would rather steam-iron their toes than do anything as ridiculous as read the user manual. Let's be honest, we're talking about us men here... 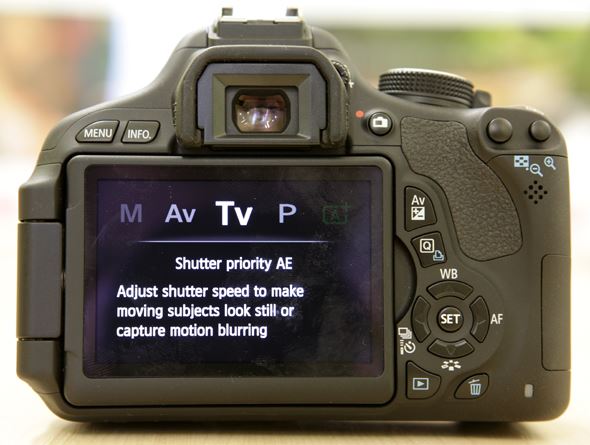 Scene detection with Scene Intelligent Auto
For some time now many of Canon's compact cameras have featured a Scene Detection mode that will identify the scene being photographed and apply the best possible settings. In the compact cameras this meant selecting the most appropriate scene from one of 32 different options saved in the camera's database. The 600D is much, much cleverer. It has an almost infinite number of options because each setting is specifically tailored to the scene being photographed. For example, if you're photographing a person on a beach, the 600D doesn't just simply apply a generic "Beach" setting, but will actually analyse the blue of the sky, the green of the sea, the yellow of the sand and the skin tones of the person and choose the best combination of colour and image settings to get the best possible shot. With a different person in the photo or a slight change in the weather, the settings will be different again as the camera changes and adapts the various parameters. Clever, clever camera.

Creative filters
Again taken straight from the 60D, these Creative Filters allow you to add effects to your images after they've been taken. These effects include Grainy Black and White, Soft Focus, Fish-eye, Toy Camera and Miniature. Although not to everybody's tastes, I defy anyone to try these out and not find them to be a huge amount of fun.

Basic+
To quote Canon themselves, "Basic+ technology allows photographers to customize basic auto settings according to lighting conditions or ambience." What this means in practice is that it offers an easy way for users to start taking more control over their images without having to learn the full ins and outs of photography. For example, it offers the ability to control the background blur of a shot, without the need for learning all about aperture and depth of field. Of course, should the user choose to learn more, Basic+ is a great way of introducing them.

I have always been a fan of Canon's xxxD EOS cameras and, more specifically, the 550D. As such it is with a mixture of joy and sadness that I have to say that I find the 600D to be a very impressive and well-rounded camera. 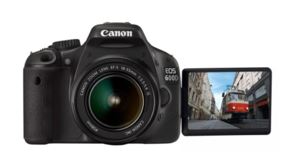 Canon 600D - a worthy addition to the EOS empire

It's as neat, light and comfortable to hold and use as the 550D, but the introduction of the vari-angle screen and built in Speedlight transmitter mean that it is, in my opinion, a better camera than the 550D.

This of course should not surprise us - it is meant to be a more advanced camera than the 550D and no doubt the price reflects that. I'm also not suggesting for one moment that the 550D is now redundant - far from it. The 550D is still a great camera and one that deserves to be respected in its own right.

However, there are several reasons to consider the 600D over and above its older, if slightly less equipped sibling, and I'm pretty sure that this new EOS will do very well in the world.

- body only RRP £419
The Canon EOS 1000D will have been around for 3 years come June, which in positively ancient in the world of digital SLR cameras, particularly for an entry level model. As such, the introduction of a new camera at this end of the EOS line-up is expected and, if we're being completely honest, well needed. 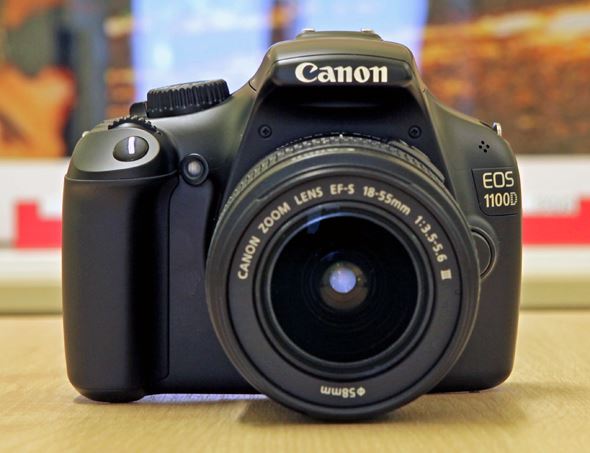 The 1100D is very much aimed at first time SLR users and features a range of helpful functions and easy to use modes to help the beginner get the best from their photography. 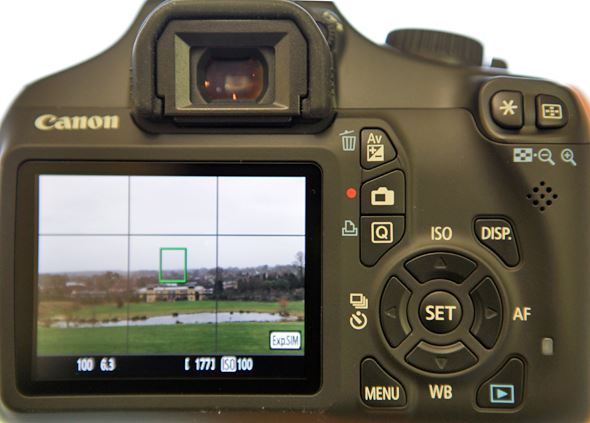 The EOS 1100D has been given many of the helpful shooting functions that can be found on its higher spec brothers. The Feature Guide lets the user know what the functions are and how they can be used, while Creative Auto and Basic+ modes are identical to those found of the 600D and 60D.

For those photographers looking to make the jump to SLR photography, the new Canon EOS 1100D lets them dip their toe in and get to grips with this new world of photography in their own time. I'm pretty sure that anybody picking up this 1100D for the first time would be able to get great shots from the first click of the shutter and, although very much aimed and the beginner, it will also allow the user to grow and adapt and their skills and confidence improve.