Along with the launch of their 2 new digital SLR cameras, the EOS 600D and 1100D (see other post) Canon also announced the arrival of 2 new Speedlite flashguns, the 320EX and the 270EX II. 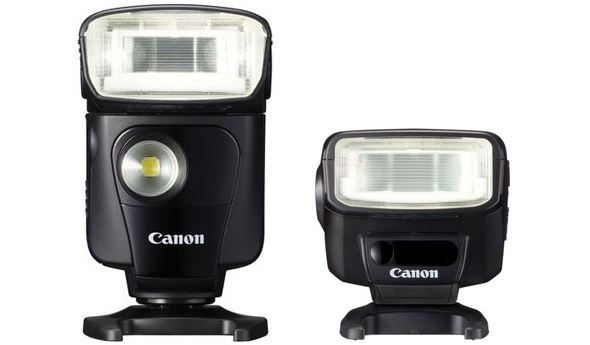 With a guide number of 32, the 320EX represents a whole new entry in the Canon Speedlite range, slotting in between the 270EX II and 430EX II flashguns with their guide numbers of 27 and 43 respectively. Because this is a brand new model, it's difficult to know exactly what we should expect, but the 320EX certainly seems well equipped, with the features and functions you'll find on Canon's higher spec Speedlites, plus some extra ones.

The 320EX has both tilt and swivel functions, allowing the user to position the flash head to bounce light off a wall, ceiling or reflector for softer or creative lighting. It also has a manual zoom that allows the 320EX to match lens focal lengths from 24mm to 50mm - ideal for group shots or head and shoulder portraits. Like the 430EX II Speedlite the 320EX can be used as part of a wireless creative lighting set up as it is equipped with a wireless slave mode, meaning it can be controlled and triggered by a 580EX II Speedlite, the ST-E2 Speedlite Transmitter, or the built in wireless transmitters of the EOS 600D, 60D and 7D cameras.

The Canon Speedlite 320EX with tilt and swivel functions

An all-new feature of the 320EX (although it can also be found on the new 270EX II Speedlite) is the inclusion of a remote shutter-release button. This effectively duplicates the functions of the Canon RC-6 remote control in that it allows the camera to be triggered by an infra-red signal. This can be used with or without the flash itself firing, meaning you can either use it as a simple camera release, or, perhaps more usefully, you can hold the flash in position off camera and fire both the camera and the flash simultaneously, providing creative flash options with cameras that don't offer wireless Speedlite control as standard.

Finally, the 320EX has one particular feature that makes it unique - a built in LED video light. If you think about it, this makes perfect sense. With the exception of the 1Ds MkIII, every camera in Canon's EOS range now offers HD video recording and many users find themselves investing in a video light. Of course, many of these SLR film-makers also take still photos and like the versatility that an external flashgun offers. The 320EX means that one unit now covers both bases, with the versatility and performance you'd expect from a Speedlite flashgun, combined with the convenience of an LED video light.

For some reason, and I can offer no logical explanation for this, upon being handed the 320EX with the LED light turned on and being told by the thoughtful Canon gents that it was best not to look directly at it, the first thing I did was point it straight into my eyes.

Believe me, it's bright.

There are some cosmetic tweaks that subtly change the look of the 270EX II, such as the layout of the model identification markings, the position of the flash-ready light and the contours of the body.

Some of these changes, such as the layout of the rear switch, have been necessitated by the addition of some functions and features to the new 270EX II. You may have noticed that the new Speedlite now offers a slave mode so that it can be used off camera and controlled by a 580EX II Speedlite, the ST-E2 Speedlite Transmitter, or the built in wireless transmitters of the EOS 600D, 60D and 7D cameras. The 270EX's compact size will mean it can be placed where other flashguns are too big to go, making it a welcome addition to Canon's wireless flash system.

Like its fellow newbie Speedlite, the 320EX, the 270EX II has been equipped with a remote shutter-release button. As on the 320EX this button is like having a Canon RC-6 remote control built into the flash and, again like the 320EX, allows the user to hand-hold the Speedlite off camera and fire the flash while simultaneously triggering the camera's shutter.

Canon have clearly set their sites on the wireless/remote flash creative lighting market and, more specifically, those beginner users who may have been a little nervous about attempting off camera flash in the past. Both the 320EX and the 270EX II make it simple for Canon's DSLR owners to start attempting some off camera flash shots with minimum expenditure and maximum convenience and should become popular models in their own right. Of course, as part of a larger wireless flash system alongside Canon's existing Speedlites, the 430EX II and 580EX II, the possibilities these new flash units present are practically endless.

Although not for everybody, DSLR movie making is certainly an increasing area of photography and the inclusion of the LED video light on the 320EX is a brave and understandable move. Whether this is immediately seen by the flash buying consumer remains to be seen, but it's fair to say that Canon have certainly upped their flashgun game.