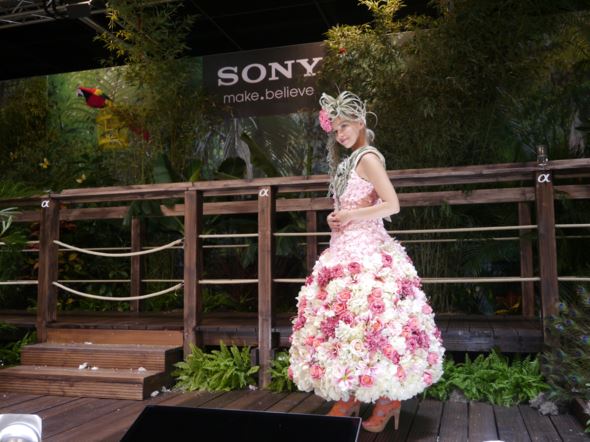 A model to photograph at the Sony stand

Last week I wrote about Sony's launch of the A99, NEX-6 & RX1 cameras and at Photokina I was lucky enough to get my hands on all three... 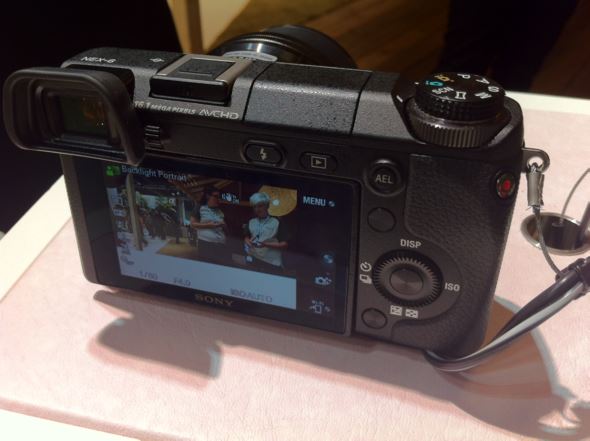 The NEX-6 was the camera I managed to spend the most time with as I had the opportunity to play and test it over dinner one evening. I'm going to admit right up front that I left really wanting one of these cameras for myself and was not happy at all about handing it back to its rightful owner!

I'm sure current Sony NEX users will understand what I mean when I say that this series of cameras are such a joy to use. My main camera right now is a Canon DSLR and I've had very little time shooting with Sony cameras in the past, but after having the NEX-6 in my hands for a few minutes any apprehension was lost and I felt very comfortable finding my way around all the controls, dials and settings. I think that's what I loved about this camera the most - it's so simple and intuitive to use that you can pick it up and feel confident using it almost immediately - and that's when you can really start enjoying taking photos and exploring what the camera is really capable of. 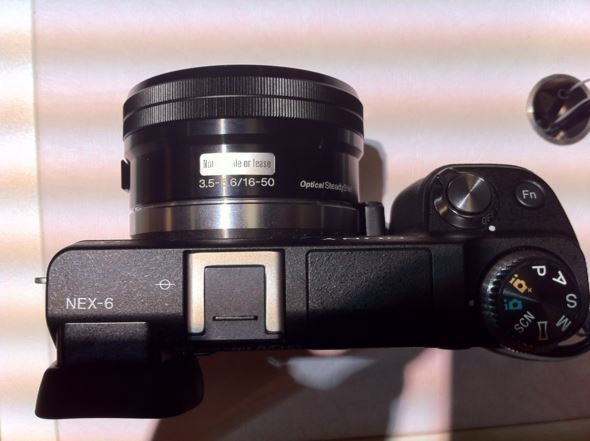 The electronic viewfinder is really top notch and virtually instant. Sometimes you do notice a slight lag with this technology but the NEX-6 has one of the best versions I've used and I think I'd be more than happy using it full-time instead of the optical viewfinder I'm used to.

As I mentioned, I was using the NEX-6 inside a restaurant at night, so it wasn't a particularly bright lighting situation but the camera performed excellently and produced pin sharp, crisp images. I had a quick play with some of the creative features available, such as Miniature effect, Toy Camera and Selective Colour modes (you can choose from quite a few colour options for this feature) - these aren't such an important function for me personally but certainly a lot of fun to play around with! 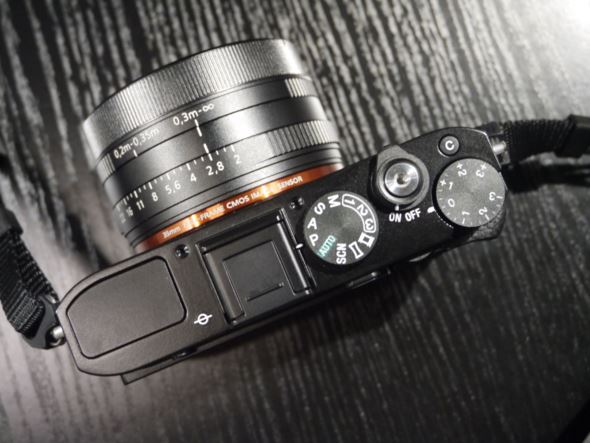 Now this was one camera I was definitely looking forward to seeing at Photokina: the RX1 - the world's first full-frame compact camera (as said Sony at the time of launch). Unfortunately this wasn't a working sample, so I wasn't able to shoot a single image on it or experience the operation of the camera but in the not-too-distant future I'm really looking forward to seeing what it's capable of producing. I can tell you how it looks and how it feels in the hand though, and as soon as you see it and pick it up I think you'll find it does feel pretty special indeed. 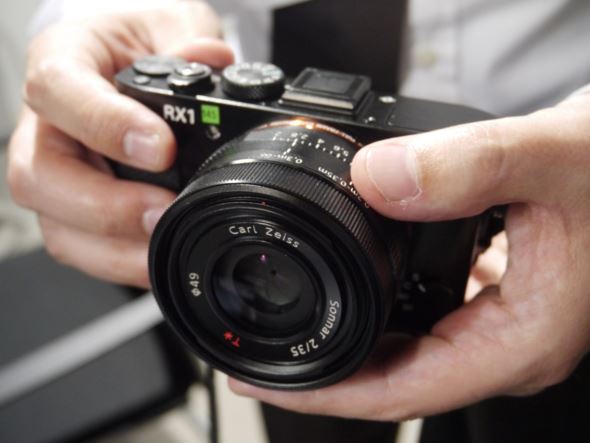 To get an idea of the size, a member of the Sony team is holding the RX1

With a launch RRP of £2,799, you'll expect something extremely well constructed as a minimum and you definitely get that impression once it's in your hands. It has a subtly retro feel and look to it. The aperture dial on the Carl Zeiss 35mm f/2 lens is smooth in operation but with a suitably heavy weight to it. You probably spotted the amber ring around the RX1 lens, which you'll also find on the A99 and NEX-VG900 camcorder - if it's not obvious to you, it indicates the 24.3 megapixel full-frame Exmor CMOS sensor found inside each and every one of them.

Shooting mode and exposure compensation dials are handily located on the top of the camera as is the pop-up flash that it's equipped with. Many of you will be pleased to know there will be both optical and electronic viewfinder kits available separately, which will slot into that multi interface hotshoe. There will also be a Lens Hood, Jacket Case and nifty looking Thumb Grip available as accessories for the RX1. 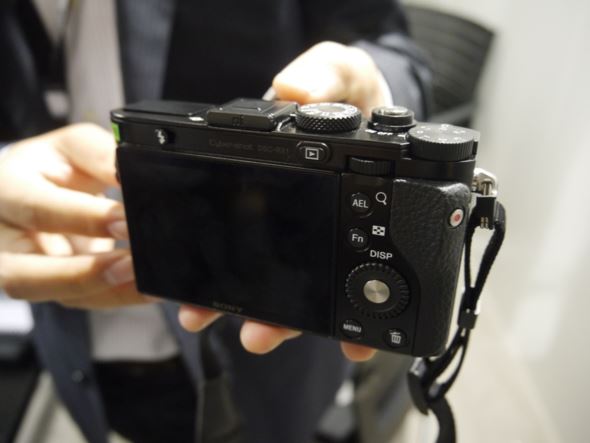 The rear of the Sony RX1 full-frame compact 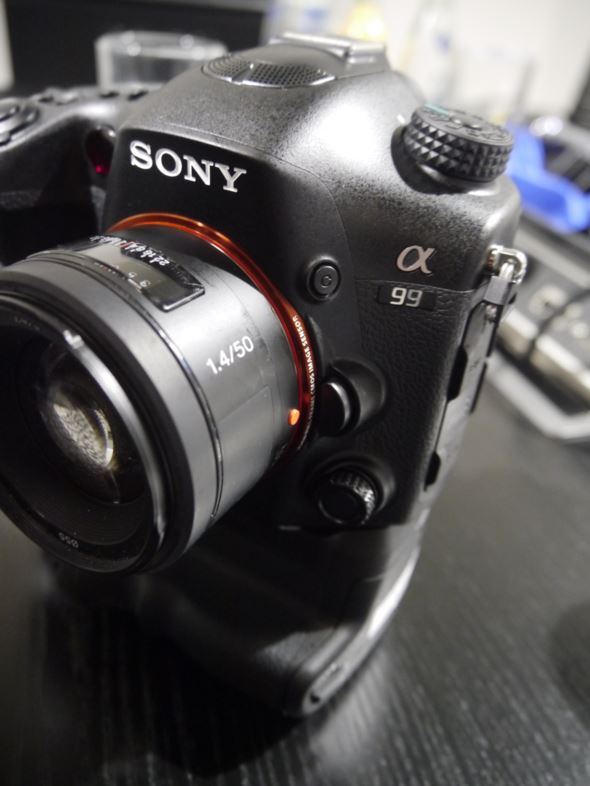 The Sony Alpha A99

I managed a quick look at the Alpha A99 at the Sony stand too and it seems the big feature here is more advanced video functionality, with the power to shoot full HD at 60p in AVCHD Progressive format. The new XGA OLED Tru-finder is excellent, giving a crisp and bright view with 100% coverage.

The grip was attached on the model I saw, which holds 2 additional batteries, giving videographers and photographers a total of 3 to power their creativity over a much longer period of time. The A99 with grip is a really large piece of kit and the combination of a magnesium alloy chassis as well as mag alloy outer panels (top, rear, front AND sides), make it an extremely robust camera. The rugged construction and sealing around buttons, dials, viewfinder, LCD and openings give the A99 dust and moisture protection too. 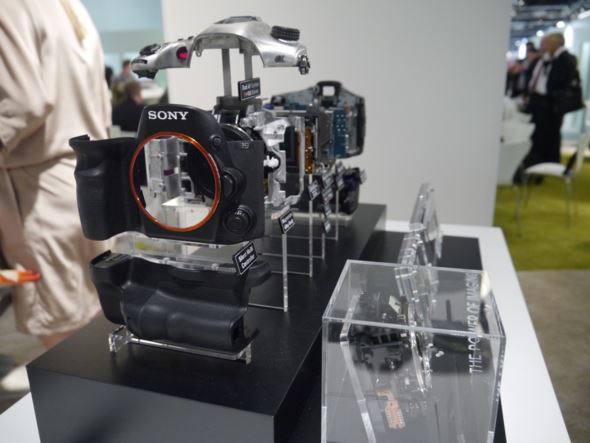 A deconstructed A99 on the Sony stand at Photokina

I thoroughly enjoyed myself at the Sony stand at Photokina, there was certainly a lot going on with plenty of interesting subjects to photograph with either your own camera gear or if you were on the stand trying out their mounted DSLRs and range of lenses - there were models, a jungle scene, acrobats on swings and even a steel drum to provide some ambient music. Above all the excitement, Sony had on display some incredible technology and innovative products I'm eagerly waiting to see more of.