Sony, it seems, are simply not happy as being regarded as imitators rather than innovators. The Alpha SLR cameras have forged their place in today’s SLR marketplace, and the dust has hardly settled on the release of Sony’s compact interchangeable lens cameras, the NEX-3 and NEX-5, and yet here they are releasing something entirely different to either the previous Alpha or NEX models. Meet the Sony Alpha A33 and A55.

On the surface, they look much like any of Sony’s other Alpha SLR cameras, with only a few aesthetic tweaks, additions and changes to set them apart. But who said the camera never lies? Looks, after all, can be deceiving, and if the A33 and A55 look to you just like any other SLR, then the deception is complete. 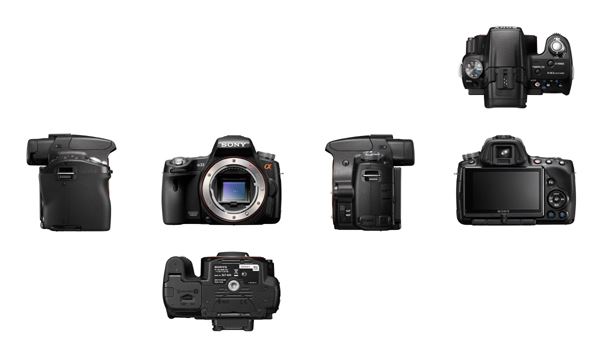 You see, unlike the previous Sony Alpha cameras, the A33 and A55 are not SLRs. Confusingly, neither are they interchangeable lens cameras like the NEX. Sony describe these new models as SLTs; Single Lens Translucent cameras – a whole new breed.

These new Alphas use Sony’s Translucent Mirror Technology in their build and design. This involves replacing the standard mirror usually found in an SLR with a fixed, semi-translucent mirror to offer the autofocus performance of an SLR with the Live View and movie capabilities of a mirror-less interchangeable lens camera.

Traditionally, SLRs use a mirror to reflect incoming light from the lens onto the AF sensor for phase-detection auto-focus and into the pentaprism for composition through the optical viewfinder. 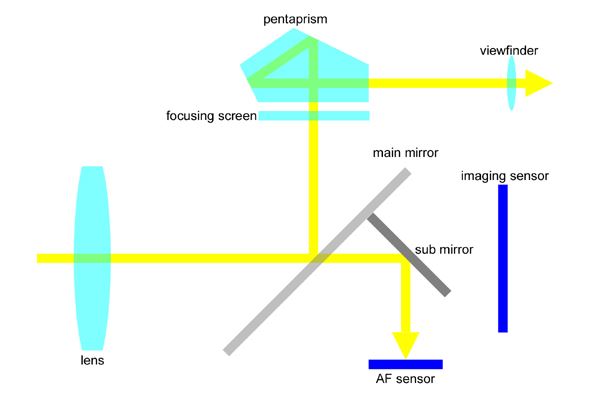 The problem with this is that to actually expose the photo the mirror must be moved out of the way. This adds extra time to the shutter cycle, reducing the frames-per-second rate of all but the most expensive cameras and also adds a potential source of vibration and image blur. 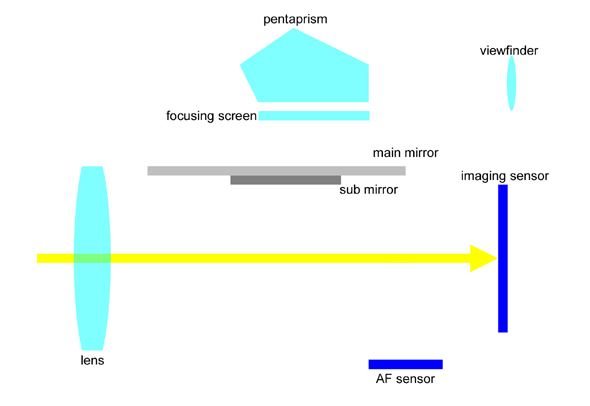 More relevantly these days with the inclusion of Live View and video recording on SLR cameras, with the mirror up the optical viewfinder is blocked and the AF sensor that is used for phase-detection autofocus is also redundant. This has meant that composition via the LCD screen is the only option, and contrast-detection auto-focusing (inferior to phase-detection) is the only available AF mode. For movie recording, most SLRs limit the user to manual focus, the limitations of which are obvious. 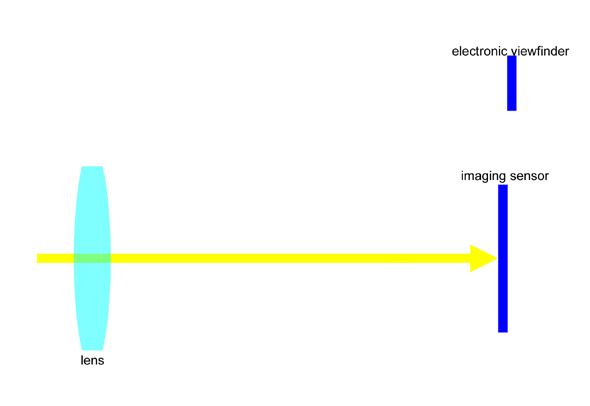 Although this has made these cameras smaller and lighter than their SLR counterparts, as already mentioned contrast-detection is significantly inferior to the phase-detection method, the latter being faster and more accurate.

So, what about this Translucent Mirror Technology? Well, Sony have essentially combined some of the component of the SLR system with those of the mirror-less cameras to create a kind of hybrid. 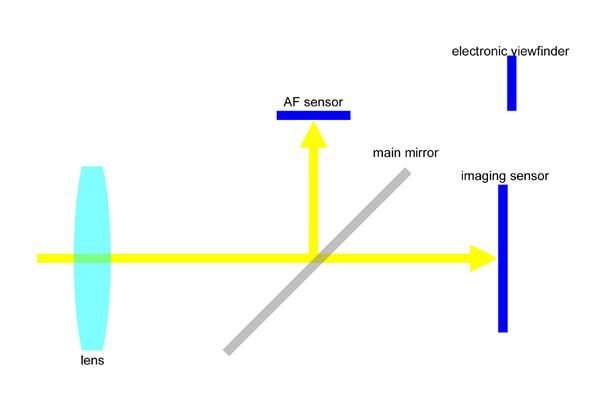 Although a mirror is present, like an SLR, the mirror in the A33 and A55 does not flip up out of the way when a shot is being taken (although it can be hinged up for sensor cleaning). Instead, the mirror is partially translucent, reflecting 30% of the light up to the AF sensor for full time phase-detection auto-focusing, while transmitting 70% of the light through to the imaging sensor. 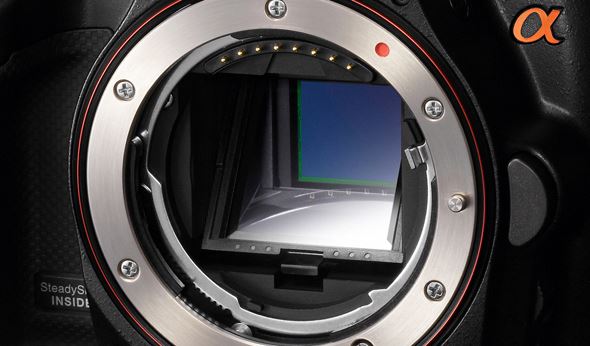 Because of this arrangement it is not possible to use an optical viewfinder, so the A33 and A55 feature an electronic viewfinder, as you would expect to find on a mirror-less interchangeable lens camera. However, unlike these mirror-less cameras the A33 and A55 do not rely on contrast-detection auto-focusing, making them faster, more accurate, and better suited to fast moving subjects. 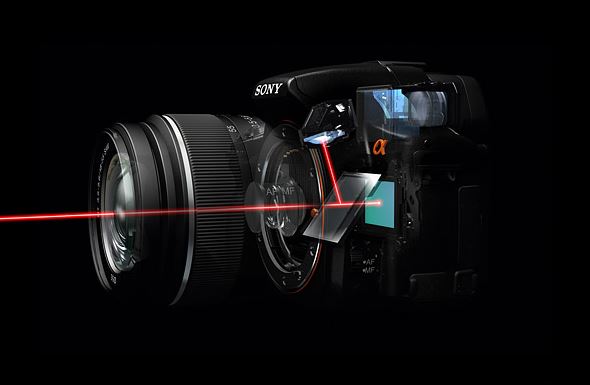 There is a downside to this system; because 30% of the incoming light is re-directed to the AF sensor rather than the imaging sensor, this equates to a light-reduction of approximately 1/3 EV, or 1/3 f/stop. However, for many photographers the benefits of this small loss of light will be well worth the trade off. And what exactly are the benefits? For starters, because the AF sensor is constantly receiving light from the lens, phase-detection auto-focussing is always possible. This means that during an exposure, when using Live View and even when recording HD movies on either the Sony A33 or A55, it is still possible to focus quickly and accurately with phase-detection AF.

There’s another bonus too. Because the mirror doesn’t have to swing up out of the way, the shutter is the only moving part during an exposure. This has enabled the new Sonys to reach frames-per-second rates never seen before on cameras in this price bracket. The A55 can hit an astonishing 10 fps, with the A33 only a little way behind it on 7fps – to get anything approaching these speeds in the past you will have had to pay at least twice the price of the new Sonys. 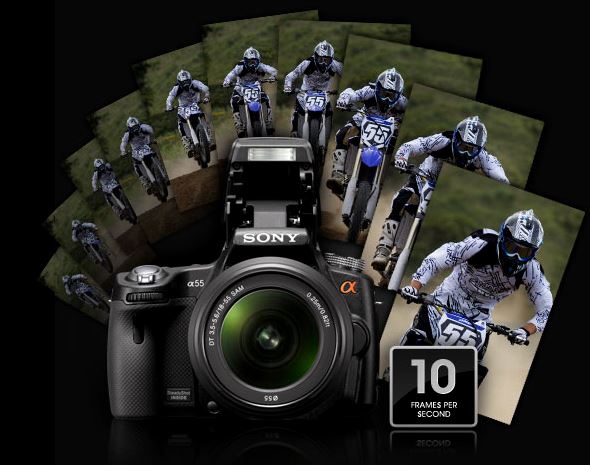 Of course, the Translucent Mirror Technology is just one part of the A33 and A55’s arsenal – a very large part, but just one, and there are plenty of other reasons, functions and features to make these Alphas worth checking out in more detail. You can of course do this on the Wex Photographic product pages for the A33 and A55, or on Sony’s own website, but in the meantime here’s a little taster from Sony. Enjoy.