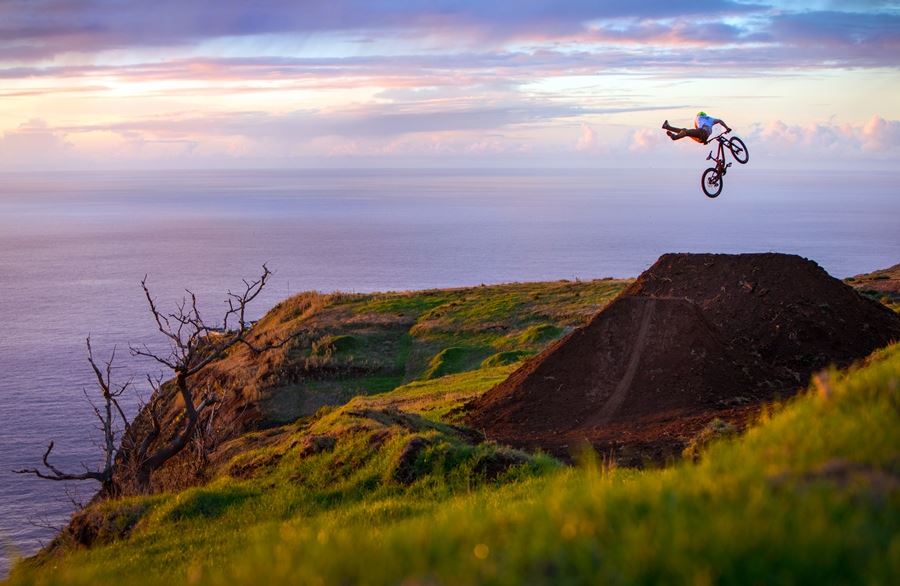 Lush forests, towering mountains, travelling the world with a camera in hand… sound like your idea of a good time? If so, then working in action sports could be your best move. Here at Aspect Media this is exactly what we specialise in. While we do shoot everything from weddings to corporate promos, for half the year we live out of suitcases and hotel rooms, and can generally be found halfway up a mountain in full waterproofs, getting the kind of shots many would struggle to achieve.

There are two sides to capturing these lovely shots. If it’s -5° with heavy rain, or you’ve had days with pretty much no sleep, you still need to be out there documenting the sports and getting the job done. Learn from our mistakes (which are inevitable when starting out) and read on for a few tips on how we go about shooting action sports, and what makes our lives that little bit easier...

Pre-production: Fail to plan, and you’re planning to fail

First, a few key things we work on before a shoot to make sure it all runs as smoothly as possible when it matters. The first thing we do is open a dialogue with the client and work out what they want us to achieve and the overall goals of the project. The target audience, the product we need to highlight, the length, the end destination, the style and the pace of the video – all this needs to be clearly established. We also need to know if there are still images that need shooting as well.

Then we think how we can get there and how we can make the connection with the people that will watch it. We go from the rough ideas and aim to write a detailed brief, writing shot lists with must-get scenes and how we want them shot, though when you’re outdoors things often change in the spur of the moment, and we always see new shots we want to get.

Be sure to consider context and story, but don’t be afraid to shoot things that aren’t in the initial plan. Story is king and if there isn’t even a small, simple story, a reason for the person doing what they are doing in the film, the video will suffer.

Put together call sheets. A PDF document or Google Doc that auto updates, or at the least a big email to all crew with everything info-wise – hotels, locations with maps, postcodes, dress codes, weather forecasts, links to shot lists, etc.

If at all possible, try to location-scout on the ground. This ensures you don’t waste time shooting one location to only find a better one later in the day when you don’t have time to utilise it. If that isn’t possible, make do with Google Maps, Google Images, and talking to locals who know the area.

Put some time into helping build or dig features (ramps, rails, jumps, etc.) for a video – if the athlete has nothing to ride, or jumps that have already been shot on lots before, it will impact the project. 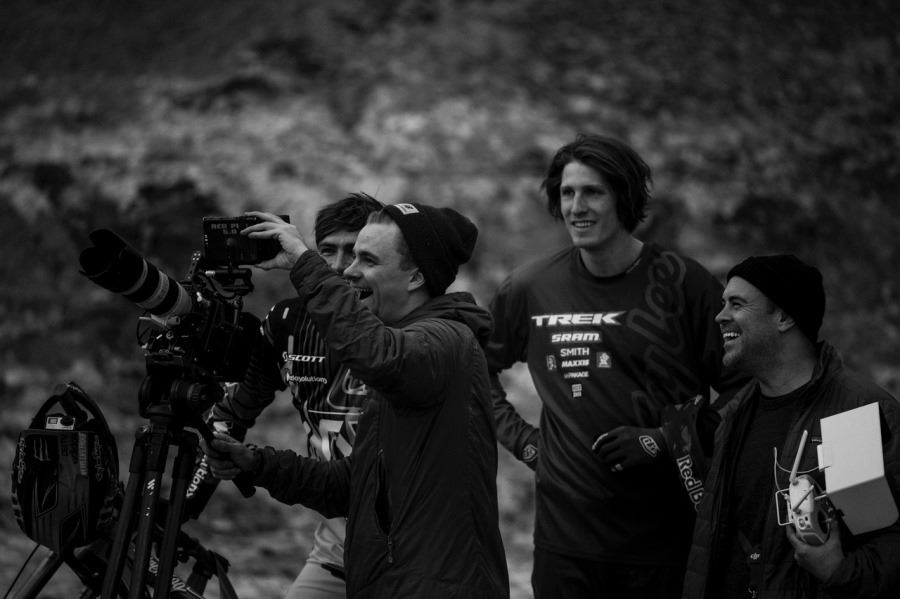 Here’s what you would usually find in our kit bags when we are out on a shoot. In terms of cameras, a Sony A7s II, Sony FS5, Red Scarlet-W and a bunch of GoPros. All of these cameras excel in different areas, so we choose whatever the right tool is for the specific job.

In terms of support gear: Movi gimbals, Glidecam stabilisers, sliders, tripods, LED panel lights, a full selection of lenses, magic arms, drones and more. Though make sure you pack appropriate kit for each shoot; if you’re climbing up a mountain for three hours, you don’t want to carry a Red and bulky gimbals. In that situation, slim your kit down with something like a Sony A7s II and think of creative solutions for getting your shots without reducing the quality of your work.

Waterproofing is always a fun one. You can’t choose the conditions you shoot in, so here are some tips. You can get some nice rain cover specifically made for every camera, and while these are good and worth having, supermarket bags-for-life have saved us countless times. Modifying these bags with some gaffer tape and using that alongside bin bags, full waterproofs and a good umbrella with wind vents is well worth considering as a backup option, but we’ve often used it as our primary option. Always keep lens wipes dry in sandwich bags, and use lens hoods to keep rain off the lens.

We always shoot in one of the S-Log profiles on the Sony cameras, and when filming on a Red, Redcode raw (this footage is amazing right off the bat). If you are on a camera with fewer options, try and back off all in-camera saturation, contrast and sharpening from the neutral PP, and work with that. The less the camera bakes an image in, the more information you have to work with in post.

Whether you’re recording internally, or via external recorder, wherever possible try and shoot as high a bit-rate and codec as possible. More information equates to a much cleaner image and much easier for pushing around in post.

DON’T overlook audio! It truly is half of the finished product. Always record your on-board internal microphone on at least one channel; or, even better, use an on-camera shotgun. Even if you don’t plan on using any of that audio, it’s worthwhile at least having the option to use it in post. Make sure it’s not clipping, and monitor it with headphones whenever you can. There will be little pops and crackles or background hum that you can’t see on the visual readout, but can hear instantly. We also quite often try and radio-mic the athlete for more immersive on-board audio.

For the most part, shooting action sports is all about movement and conveying what the athlete is doing and going through to the viewer. With this in mind here are a few tips on how we get it done. 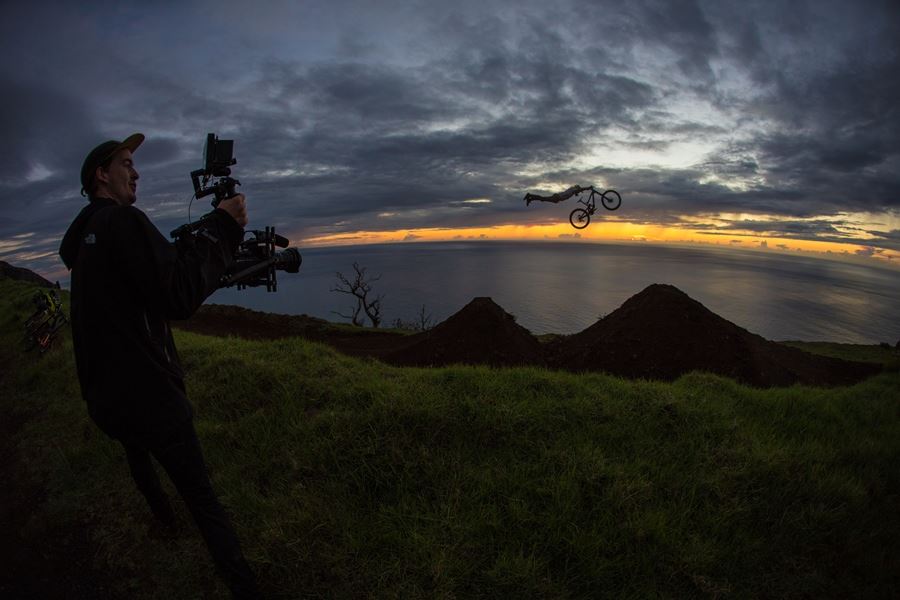 Gimbals and Glidecams both have their place. The look you get from each tool is different, so check out footage from both before you choose what’s right for your production. We find that the gimbal is best at keeping a camera steady and level, it’s especially good when running at high speed, used from a moving vehicle, or longer lens movements. The trade off is this tech is that it can be time consuming to set up, and needs good weather to operate it in.

The Glidecam often steps in when it’s wet weather, and where a gimbal would just be too much hassle to operate, such as when you are away from power or access is very limited and kit needs to be slimmed down. The main reason for getting one, however, is budget. Renting kit is always a great option if you don’t need it all the time and gimbals are fairly cheap to rent for a day or two. 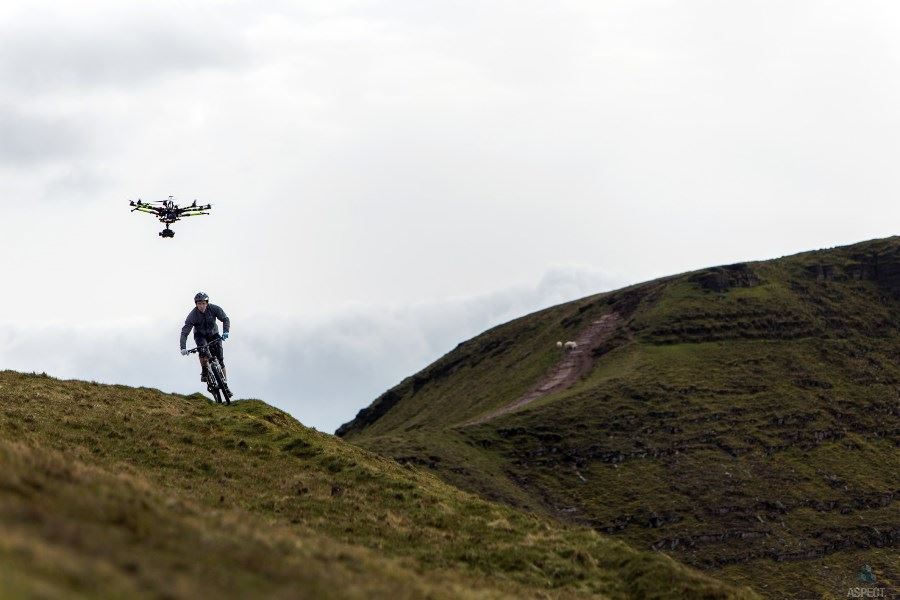 Drones. Like them or not they are here to stay and they can offer a whole new angle to your video, literally. Just make sure you use them legally and familiarise yourself with best practice. Tripod shots still have their place; we use them in most videos, either for more purposefully static shots to break up constant movement shot after shot, or to steady the camera when doing long lens work.

This leads me nicely on to... focus pulling.

The skill of manually racking focus with a subject as they speed around the frame is something you get a lot of practice at when shooting mountain bikes. Tracking a rider coming into the lens at 30 miles per hour and having to keep them sharp isn’t easy.

I find that shooting wide open, which is sometimes needed in dark woods, makes your life harder, but shooting at f/16 can be just as much of a challenge. Everything can look in focus in-camera, but when you’re back on the computer, it turns out to be a bit soft. There is a focus-pull f-stop sweet spot, and in my opinion it is around f/4 to f/6. This offers enough depth of field to give you a good hit rate, while being shallow enough to see when it starts drifting out.

Slow motion is another thing that is used extensively in action sports, allowing you to show the viewer split-second moments that the naked eye just can’t appreciate. Remember though, it’s often the speed of what’s happening that makes it so impressive, so don’t overdo it!

Shooting hand-held. This may be as low-fi as it gets but it still has a place. It gives shots a bit of a raw, rough and ready feel. Don’t count it out, and use it when you want the viewer to feel like a spectator watching from the sidelines. Variety in the style of shots used will keep it visually interesting and engaging. 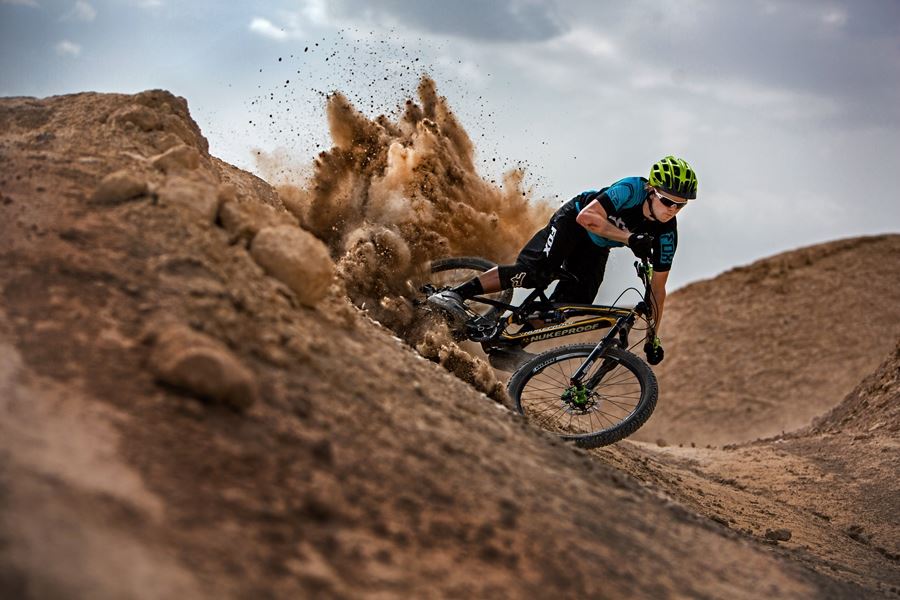 Music: it’s make or break. Use it or go raw. But if you do use it, make sure it’s legal. People put time and effort into making quality music, so it’s only fair you support the artists in the way you’d hope someone supports your films. Use sites like Bandcamp to find music, or one of the big music library sites such as AudioNetwork or Musicbed. Even Vimeo has a music side to it now where you can buy tracks to use.

Editing to the music is hugely important for the pacing of a video; it’s so important to pick a style of song that suits the footage and editing style you want to achieve. Use cuts and beats in the music to cut shots – it makes for a more naturally paced video – but remember to mix it up as videos can become predictable. Editing is pure creative freedom, so feel free to think outside the box.

If a shot you have filmed has really nice cinematic movement, try and keep it in the edit. Work the edit around it, look at the structure, but in the end always do what’s best for the end video and don’t be precious about footage. You may have put half an hour hiking up a ridge to get that one shot that looks amazing, but if it doesn’t work in the finished video, and you can’t work it, then know when to leave it out.

Last but not least: collaborate. We all have other mates who film and edit, so work together. Its good fun and most of the time the end product benefits from a few people’s ideas, energy, kit and skills.

If you have any more questions about anything we have mentioned or touched upon on in this post, then please chuck a comment on Facebook and we will keep an eye on it to get back to you.

To keep up to date with Aspect Media’s work, head over to their online residence: http://aspectmedia.tv/

Travelling the World as a Band’s Full-Time Filmmaker