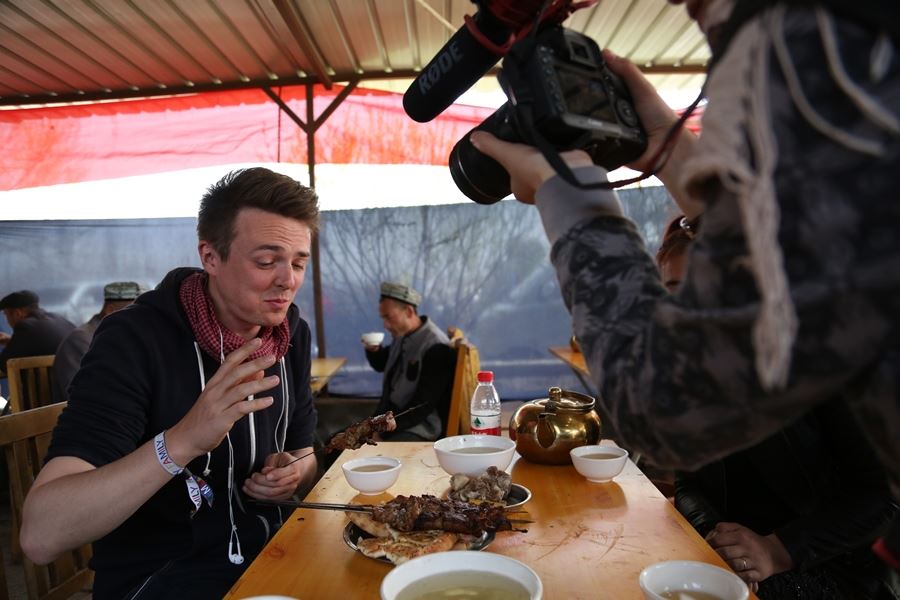 Wex Photo Video: What inspired you to do the project?

Graeme Langford: I love the idea of making films about different places and people that don’t get a lot of mainstream attention. When I was younger, I’d always point to a place on the map and wonder: What is life like there?

That’s the sort of question that inspires me when planning and making a film. I really want to convey local lifestyles, so that people all over the world can experience a different country.

I’ve travelled a fair bit over the past few years, and felt the need to turn the camera onto some of the things I’d seen. For this particular project, a Chinese travel company saw one of my previous films and provided funding. That’s how it all began.

W: How did you go about planning the series?

G: We planned our route by tracing the trail taken by the ancient Silk Road traders, who travelled thousands of miles between China and Europe. Having found landmark locations along the route, we set about researching each place.

Our Chinese co-producer, Chian, was able to find some awesome stuff regarding local legends and folk tales. This made for great material that I wouldn’t have found otherwise.

Finding suitable locations and people to interview was difficult. I decided what I wanted to feature from each location and would ask Chian if it was possible. In most cases, it was – following a few telephone calls and favours from friends. 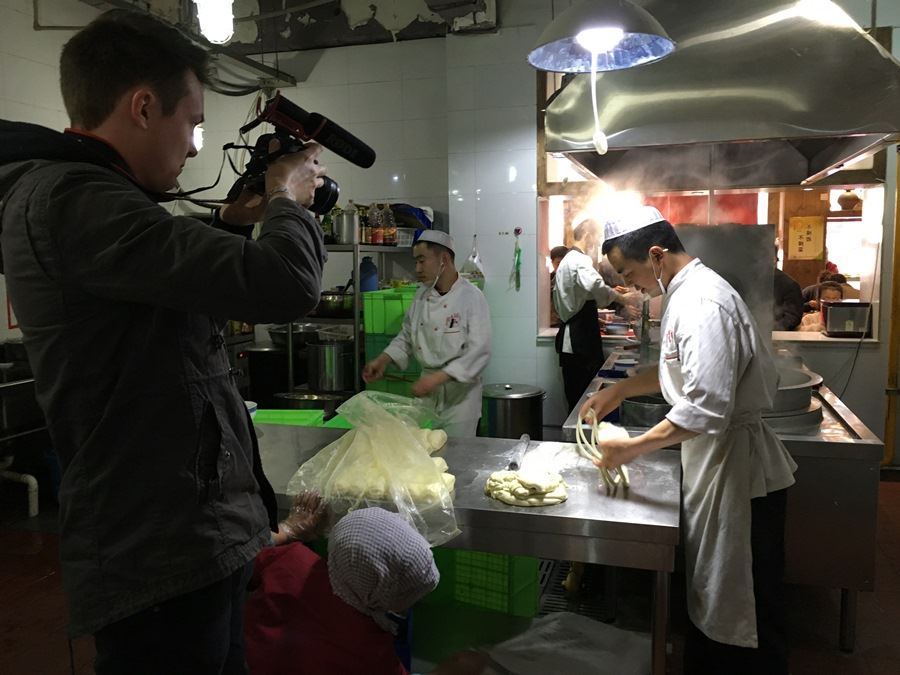 W: How did locals respond to you filming them?

G: People were really accommodating and happy to help us. That’s the thing with a project like this – people are usually intrigued about what you’re making and are happy to help. You just need the gumption to ask them in the first place.

We even managed to get into the kitchen of a famous noodle restaurant, just by asking nicely – this made for a brilliant section of the film!

W: How did you get around the language barrier?

G: This can be a huge stumbling block for any filmmaker abroad. Luckily, Mandarin wasn’t much of a problem. I can speak enough to at least follow the train of thought, and Chian, of course, is Chinese.

However, in Western China the locals don’t speak Mandarin, they speak Uyghur. Neither Chian nor I could speak any Uyghur at all, despite having several interviews planned for this part of the trip… To solve this, we had find people who could translate.

Doing the actual interviews was a bit of a nightmare; the questions were being translated from English into Mandarin, and from Mandarin into Uyghur. Then, the process had to be reversed to translate the answers into English!

It was essential to be prepared for each interview. I had to plan every topic I wanted the subject to talk about and would brief the translator beforehand. We’d write down these points underneath the questions, and would tick them off as we went to ensure the interviewee stayed on-topic.

It was difficult, but that kind of cross-cultural communication was exactly what we were going for! 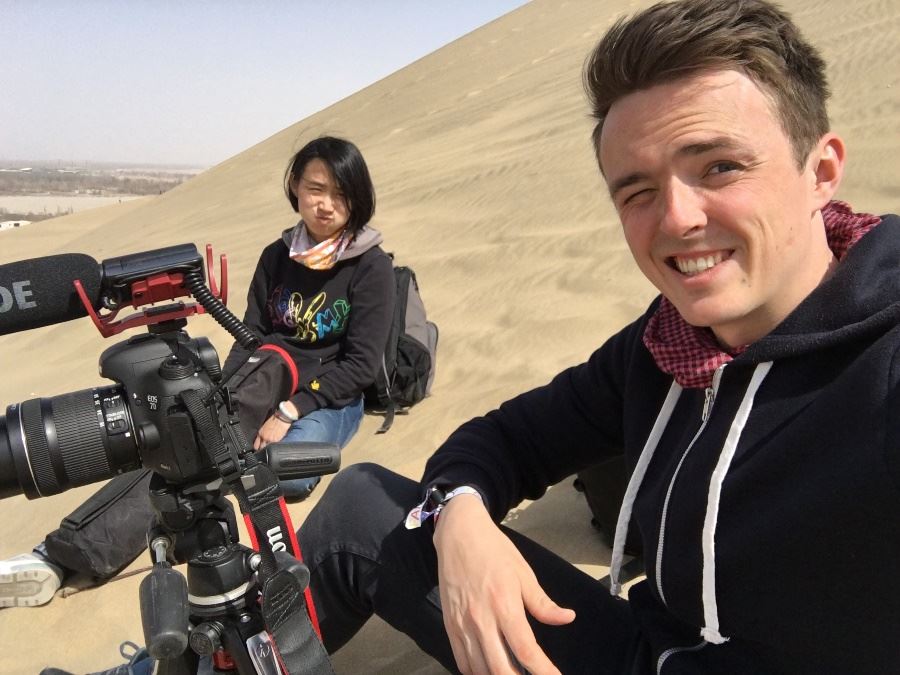 W: What kit did you use for the project?

G: We used a simple setup as we had a low budget and were travelling via public transport over a distance of 3500km (often overnight)! Lots of kit wasn’t practical, so the whole thing was shot using just a Canon EOS 7D Mark II, a lightweight tripod and a couple of mics.

We needed to get the most out of what we had, so the careful planning of each shot was essential.

W: How did you plan out the coverage of each section?

G: We created a plan and script before setting off, alongside a pretty detailed shot list for each section. Each location was heavily researched before we left, so we knew roughly what to expect and what cutaways we needed to get upon arrival. Checking off the shot list meant we knew that we had everything we needed, which helped during the edit.

There were also quite a few times where something unexpected happened, but there's no way of avoiding that – we still had to think on our feet. That’s the fun and thrill of filming this kind of thing, I guess! 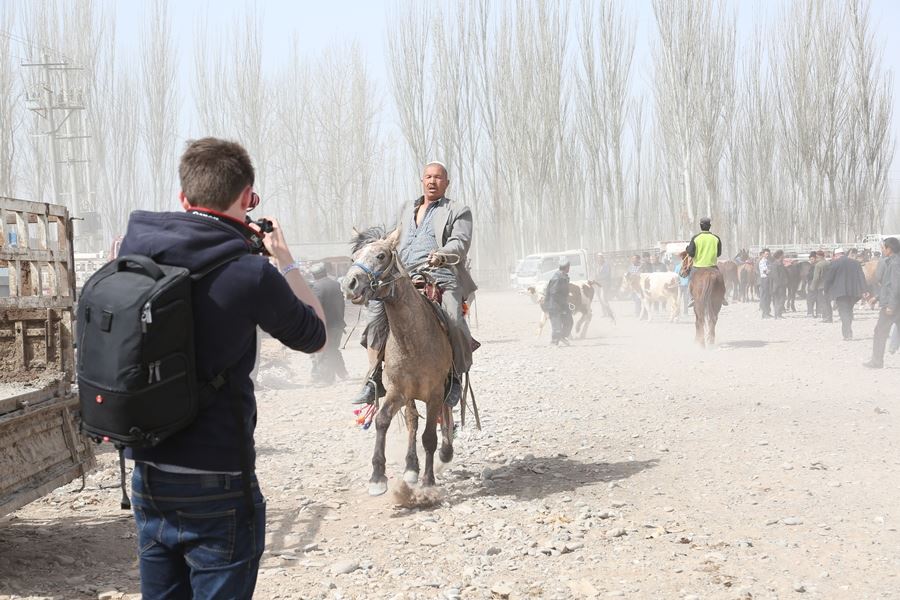 W: What was the most memorable moment of the trip?

G: For me, filming in the cattle market in Kashgar was a pretty incredible experience. I’m not sure I’ve ever felt as far from home as I did then!

Shooting in the Gobi Desert was also pretty amazing. I remember standing on top of the dunes and looking out to an endless ocean of sand. It was a moment when I could really appreciate where we were, while also reflecting on how difficult it must have been for the traders who made the journey over a thousand years ago!

W: Were there any funny moments on your journey?

G: We were filming at a place known as the Rainbow Mountains in Gansu. The weather was pretty bad, so the shots we got haven’t made it into the final film, which is a shame as it’s such an amazing place!

When we were there, we met an old man who was from Shanghai. He invited us to have lunch with him in the city of Zhangye and we accepted. The whole time he wouldn’t stop feeding me rice, wine and offering me cigarettes… I can’t remember how many bottles we got through, but by the end I was more than a little tipsy.

We had more filming at a temple in Zhangye to do that afternoon, and in the footage you can clearly see I’d had a bit to drink – that part definitely didn’t make the final cut! 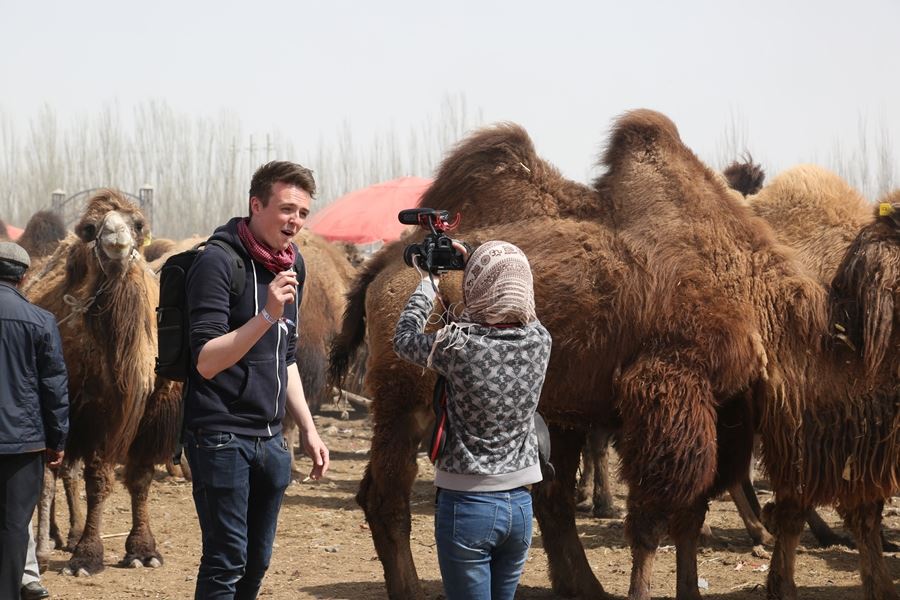 W: What advice would you give to first-time travel filmmakers?

G: Start small. It’s pretty daunting trying to take on a huge task from nothing. Try taking your camera on a weekend city break somewhere, and spend your time capturing and editing your footage of the city. This is a good way to get into the mindset of travel filmmaking and acts as a natural first step into something more complex.

If you’re going to make something in the style I have, then you need to plan as much as you can. There are so many factors that can go wrong when filming on a tight budget or time limit – some could totally ruin your film!

Research the area, write a script, plan your questions and plan your shots. As a Plan B, shoot more film than you need. Then, if something doesn’t work out – we lost a couple of sections due to bad weather ourselves – you should still have enough content.

Most importantly, it’s essential to get as much help from locals as you can – before you arrive, if possible. The extra depth and level of insight you can get is fantastic. I wouldn’t have found any of the locations or people in the documentaries I’ve made in China without Chian.

Getting help from local people isn’t as difficult as it might seem: you can find local filmmakers, writers, photographers or those willing to lend a hand when searching through various online groups. Start on social media by typing in the location you’re visiting and see if there are any dedicated filming groups, with people who can help you out.

Finally, just go for it. Grab your camera and get out there – you’ll be amazed at the results!

Travelling the World as a Band’s Full-Time Filmmaker

Behind the Shoot: “A Lion’s Tale” – Wildlife Documentary