Filmmaker Alison Wenner talks about the production of her short documentary Skin Deep, which aims to encourage positive discussion around the subject of mental health

“It's [the film] about understanding and

– I wanted to open a dialogue.”

Wex Photo Video: Can you tell us more about yourself and the type of films you’ve been making?

Alison Wenner: I tell stories. It can be through a documentary, a short film or a music video. I am mainly interested in narrative and individual stories. I’m the kind of filmmaker who likes being able to put all of my equipment in a backpack and going on a road trip to find new stories to tell. I have just graduated from film school, which has made me an aspiring director. I currently work across multiple genres such as music videos or commercial pieces for local business. I spend any spare time making travel videos.

W: You’re a lover of travel videos, but Skin Deep is a unique piece about mental health. How did it come about?

AW: I met Raquel Thomas when I was at university. Back then, she was developing ideas for her illustrated poetry book on the theme of mental health issues. I admired the amount of work she put into her project and how dedicated she was. After spending some time with Raquel, I quickly realised how difficult simple tasks could be for her due to her condition. Multiple sclerosis can cause insomnia, depression, anxiety, chronic pain, stress, fatigue, etc.

Raquel created the book for people who suffer from depression and anxiety, to make them aware that someone understands what they are going through. I made this film to make people understand what Raquel has been through, so I suppose it’s really for the same reasons. The film was projected at an exhibition for Mental Health Awareness Week, where Raquel showed her work. Getting her friends, family, colleagues and even strangers to see beyond the smile she puts on her face, was the purpose of this short documentary.

The idea to call the film Skin Deep was originally from a beautiful expression in my native language (French): ‘être à fleur de peau’. It’s an expression to qualify people that are very sensitive and edgy as the epidermis of the skin. Word by word it can be translated as: “being at the flower of the skin,” hence the close ups of the skin and flowers in the first part of the film. We decided to call both the film and the book Skin Deep as an English equivalent to this expression.

W: Raquel and I worked very closely before we started filming – learning and understanding her struggles was the first step to planning the shoot. We would talk a lot while I’d be helping her on her final project or just doing simple everyday tasks. I then scheduled two shoot days, the first day we shot in an environment where I knew she’d be comfortable, which was her house in Bury, Greater Manchester. I did an interview with her, getting her to tell her story in her own time. On the second day we filmed in Manchester city centre, in busy places where she usually feels anxious. Filming Raquel in a shopping centre was almost like a therapy for her, facing a situation that she would usually avoid. 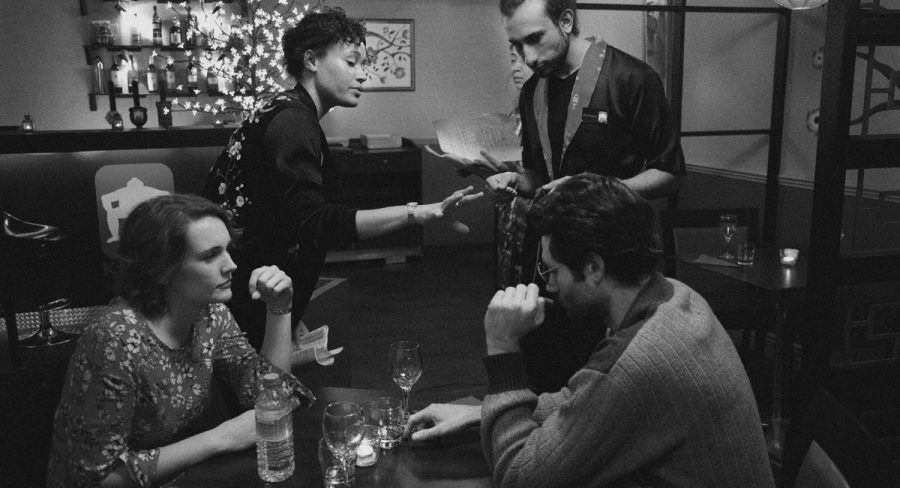 A behind-the-scenes shot of Alison on the set of the short film 10% Service Charge.

W: What filming equipment did you use when shooting Skin Deep?

W: I used a Canon EOS 700D DSLR with Nikon prime lenses, mostly a 50mm, 85mm and 18mm for the skin close ups. As for accessories, I used a basic Manfrotto tripod, a Zoom recorder and a small LED panel light. I either used the light on camera or on a stand, when the scene needed a slight lift. This equipment is very basic and not optimal, but it is reliable, and easy to use and pack. As we had to walk around city centres and in busy, built-up areas, this collection of kit was ideal for me. It was easy to transport, as well as discreet enough to avoid drawing too much attention.

W: How did you go about pulling together the edit?

AW: For me, editing is the most important process in filmmaking. It’s all about creating a flowing piece that makes the audience feel and experience a certain situation in the way you want them to. I wanted the film to be a bit messy, to reflect how anxiety can make you feel uncomfortable, but at the same time convey a good energy and a feeling of relief.

Skin Deep isn’t intended to make anyone cry or feel bad about Raquel’s condition. It’s about understanding and essentially making people comfortable enough to speak about mental health issues – I wanted to open a dialogue. Depression and anxiety are very common diseases. You will most likely suffer from either of them at least once in your lifetime.

Most people who suffer from depression and anxiety feel like they can’t speak about it to anyone, although it could be the solution to help them get better. What we are trying to achieve, through the film and the poetry book, is to shout out the message: “You are not alone.” Even though I have hours of B-roll and interview rushes, I cut down the film to three minutes with subtitles to make it easy for anybody to watch and understand the message.

W: What were the main challenges you faced when creating Skin Deep?

AW: As a self-shooter, it can be hard to focus on the content and the visuals at the same time – you’ve got to find the right balance. You have to really focus on who or what you are filming because, ultimately, this is your story, but you also have to get your equipment doing the right job. You are a technician and an artist. It’s so easy to concentrate on not having an unstable camera shot or perhaps a bit of clipped audio, but this can then lead to you missing that little detail that would, for example, make the perfect end for your film. I must say, I did find that difficult as I consider myself to be more of a director than a cinematographer.

AW: I have just moved to Toronto in the hope I can complete my next short film. We are still at the early stages, but it’s progressing well. I am already looking at doing other mini documentaries around here like Skin Deep.

You can see more of Alison Wenner’s work by visiting her website or by following her on Instagram.