We go behind the scenes with our first WexShorts competition winner Jamie Hancock who discusses the production of his cinematic short, documenting Cape Town’s growing water crisis

"I was getting up at 5am to go and film,

sitting in the morning traffic thinking:

What am I doing?"

Wex Photo Video: Can you give us a bit of background as to the sort of filmmaking do you do?

Jamie Hancock: I started out filming action sports, windsurfing mostly. I’m a windsurfer myself and spent years competing on the professional world tour. Filming and editing was what I enjoyed doing alongside my travels. Fast-forward and I’m currently on the island of Maui in Hawaii, taking care of the shoots for a windsurfing brand’s new products. I’ve been filming on land, in water, from the air (out of a helicopter) and flying a drone, and that’s just for the action parts. Then there are the interviews – which require decent audio and lighting – and makeshift studio product shoots. It’s quite a mixed bag. Some of my past work has been corporate, real estate and fashion.

W: How did you find the story for DAY ZERO?

JH: I found out about the WexShorts competition just a couple of weeks before my pre-booked trip to Cape Town, South Africa. I have been travelling to Cape Town pretty much every year (mostly to train for windsurfing competitions) and was heading out there for a month with my fiancé. I’ve seen the water situation develop, first-hand, each time I’ve visited over the past few years. I’m an ambassador for LUMIX and am always looking for new, exciting projects to focus on.

With the WexShorts theme of sustainability and given the water crisis currently affecting Cape Town, I found it to be a very relevant project to delve into while I was there. It would be a new challenge to produce a short documentary film, and I hoped to learn something from this different style of filmmaking. My general idea was that the narration was going to be the core of the film, I just needed to build the images behind the important message in that spoken narrative. 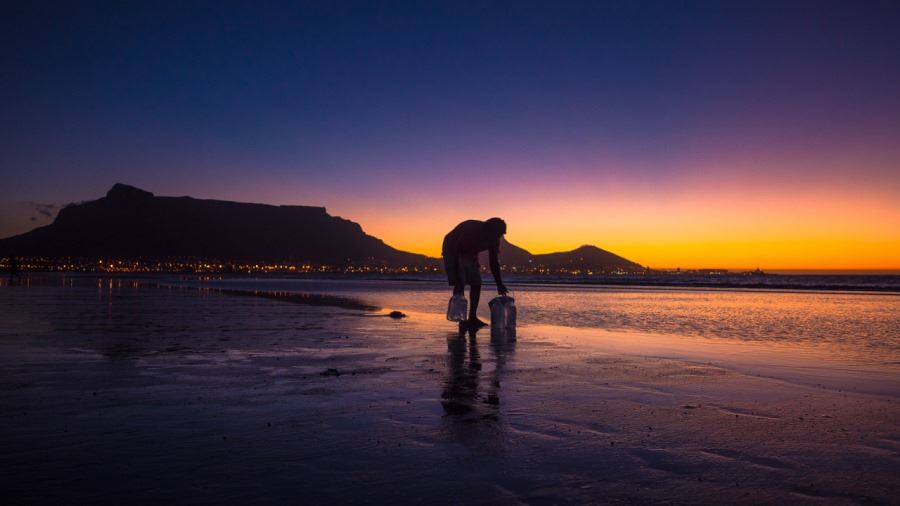 W: Who is the film’s narrator?

JH: The core of the story was based around my interview with Ray de Vries, who provided the narration for the film. I contacted him after seeing one of his videos where he gave a live report from the Theewaterkloof Dam, which is where Cape Town’s water supply comes from.

Ray is also an inventor and designed a machine that creates bottled, drinkable water through humidity. It can produce up to 150 litres per day. He was passionate, very knowledgeable and seemed like the perfect person to speak to, so I got in touch and luckily he was up for it. I didn’t have a filming schedule as I was on holiday, but in the end, I gave myself a few days a week during my month's visit.

W: What challenges did you face?

JH: Cape Town can be a dangerous place, particularly if you walk around with expensive items on show. Because of this, I was very cautious about where and when I filmed – especially as I was on my own. Filming some of the poorer areas where people are mostly affected was out of the question. I’m very wary of the dangers and trouble you can quickly find yourself in, so as much as I wanted to provide the best representation of the problem throughout my film, being safe and sensible was a priority.

Walking around with a gimbal or tripod was not an option in the city, which is where the LUMIX GH5 came into its own, thanks to its small size and inclusion of IBIS. The other main issue was the time it took to get the shots; I had to work a lot harder than I had originally thought. The shots that makeup the film are from about 15 different locations, with each place taking time to get to or organise.

Cape Town’s traffic is also pretty horrendous, so most days I’d have to leave the house by 5.30am. I was also very sick in the first week of the trip, which coincided with the first rain in months, along with some amazing thunderstorms. I hadn’t been able to leave the house for a few days, but I knew how important it would be to capture some of the rain and lightning storms for the film. I had to drag myself out of bed at 2am, to film what I could from the balcony.

Ray was also a busy man and I wasn’t able to meet him until the last part of my trip. He was having interviews with CNN and other international news outlets about the water crisis, so it wasn’t easy finding time with him. 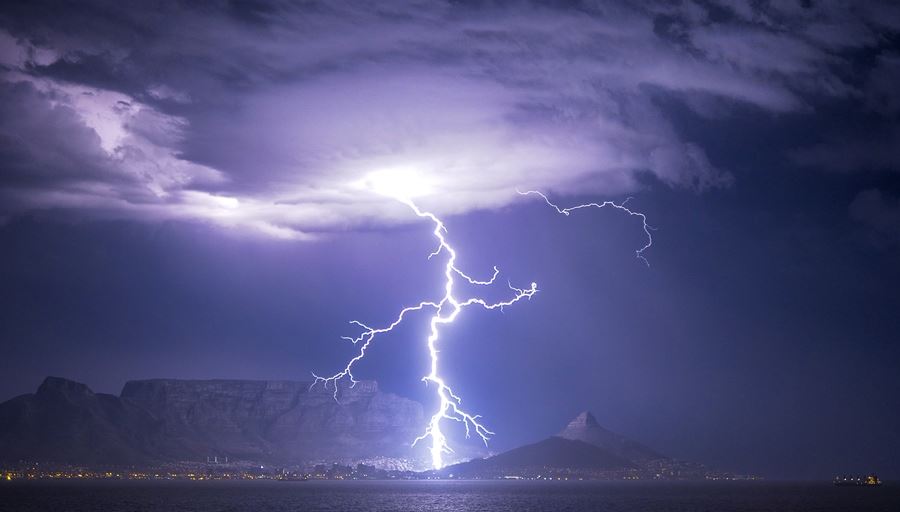 W: You’ve mentioned that you shot this on a LUMIX GH5, what other gear did you use?

JH: I used the LUMIX GH5 with a mixture of LUMIX lenses and captured everything in vlog internally. I have an old Manfrotto tripod that never lets me down, and for the interview and audio narration I used the Sennheiser AVX-MKE2 via the LUMIX XLR unit – they work flawlessly together. For this project, it was all about being discreet and quick when capturing the imagery. With no time for rigs or external monitors, I kept to mostly shooting handheld, with the LUMIX GH5 and 12-35mm lens. For the drone shots I used a DJI Inspire with an X5 camera.

There is no question that drone shots can add a huge cinematic element to a film. For this project though, I also used drone footage to highlight, from the air, the gravity of the situation Cape Town is in. The majority of the problem is coming from the lack of water in the dams. I really wanted to get that overview shot to show just how empty the dams are. Again, I had to be careful when flying the drone.

During the time I was filming out there some friends of mine had their controller and iPad stolen from them at gunpoint, while they had their drone up in the air. They were left standing there with the drone in the sky and the controller gone. Fortunately, the drone returned to home and they got it back, but it could have all been a lot worse. Stuff like this was always on my mind.

JH: It wasn’t until the last week of the trip where I began to have an idea of how the film was going to come together. It was towards the end of the third week that I managed to interview Ray and until that point, I wasn’t sure on the film or the edit. The type of footage I needed became clear after making notes from the recorded interview.

There was only one to two weeks, after returning home, before the film had to be submitted. I already had a fixed idea on the edit, as I already knew it needed to be fewer than four minutes in length and knew all the guidelines for the film’s submission. The edit and sound design was produced in Final Cut Pro X, with Color Finale for the grading. My approach was to build the music, images and Foley around the narration. 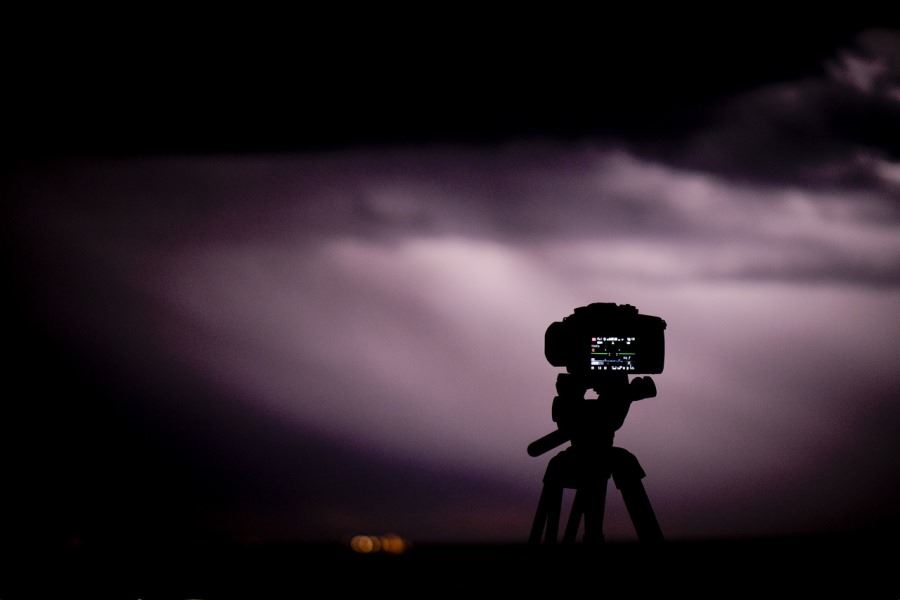 W: Do you have any advice for others wanting to create their own mini documentary?

JH: Be bold and stick to the plan. I had to really step out of my comfort zone on a few occasions. I was asking if I could film people for the project and explaining what I was doing – it was essentially walking up to strangers and doing a quick pitch. I also had moments when I was getting up at 5am to go and film, sitting in the morning traffic thinking: What am I doing?

I ended up going to local laundrettes and asking to film their washing machines, a gym to film their pool area, I even got my car washed on the basis that they would allow me to get a couple of shots of it being washed. This was all to highlight how people use water. At the time I wasn’t really filming anything that felt important, but I knew it might help to tell a story.

W: Do you have any projects lined up for the near future?

JH: As I mentioned, I’m currently in Maui doing some filming work and there’ll be quite a bit of editing to follow. We’re expecting our first baby in a few months' time, so I intend to be not too far from home over the summer months!

One Couples Journey to Creating Their Filmmaking Business

How to Become a Wildlife Filmmaker | 11 Tips