The Canon EOS M5 is the company's most serious compact system camera yet. Matt Golowczynski takes a closer look. 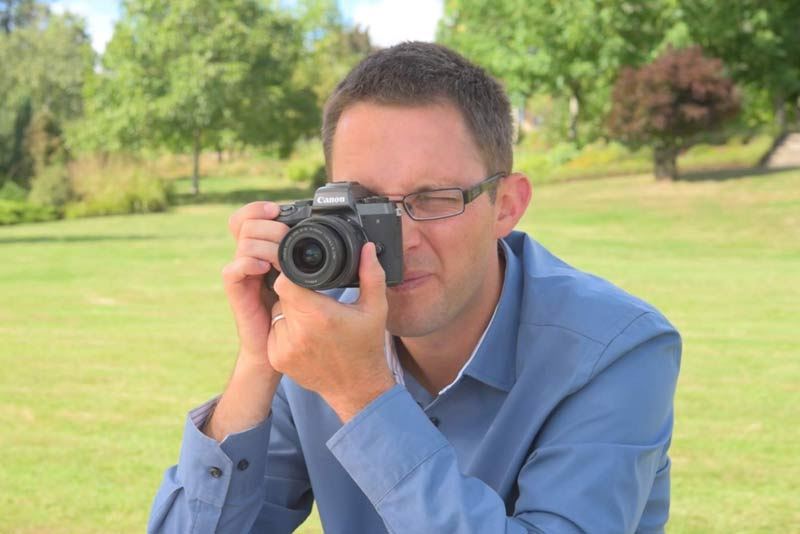 Canon joined the compact system camera party slightly later than its peers, and the handful of models its released since then have been largely aimed towards the novice end of the spectrum.

With the release of the EOS M3 last year, however, it strayed firmly into enthusiast territory for the first time, and now with the EOS M5 it’s pushed this further, targetting the kind of user that may be tempted by the impressive flagship models we’ve seen in other mirrorless lines. 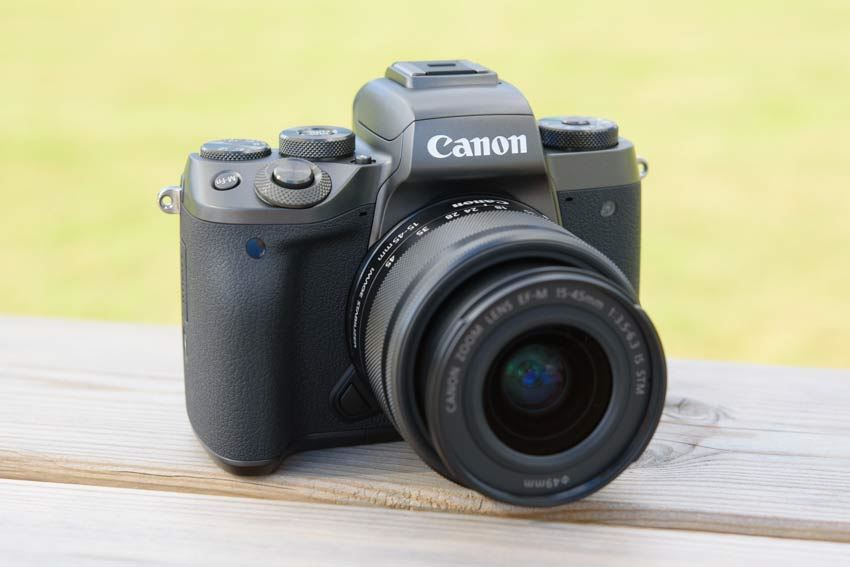 Although the new model maintains the same 24.2MP sensor resolution as the EOS M3, it is, in many ways, something of a step up from that camera.

This is clear even without looking at the spec sheet. Its grip is more substantial and clearly more suited to supporting longer telephoto lenses than the M3 and M10. Not only that, but the top plate sports an extra dial and humped profile, the latter housing an electronic viewfinder. 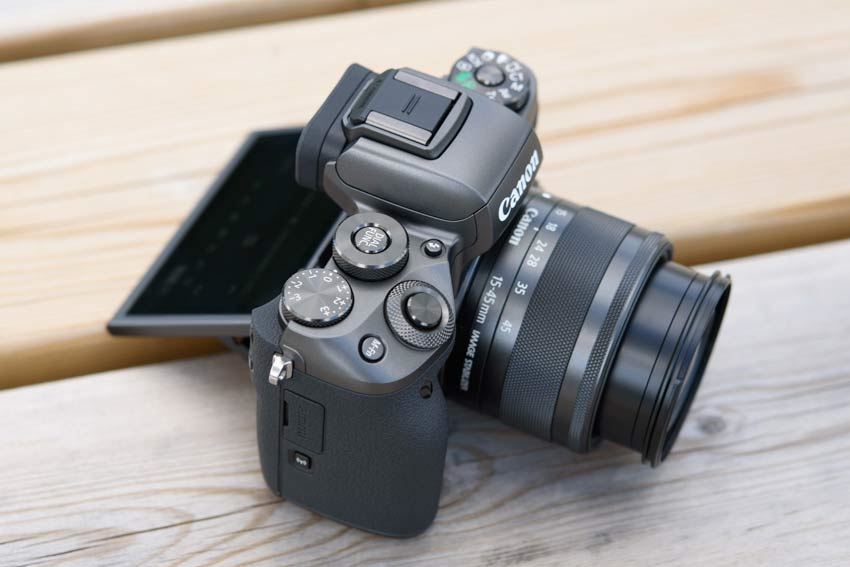 Canon hasn’t skimped here either, with the viewfinder's 2.36million-dot OLED panel faring well next to those in rival cameras. On the pre-production model we handled this appeared bright and clear, with exposure information displayed with excellent contrast and clarity around its peripheries.

Harsh sunlight made it somewhat difficult to accurately assess its performance – every electronic viewfinder is taxed in these conditions. Still, from what we saw we expect it to be on a par with similar models sporting 2.36million-dot panels. 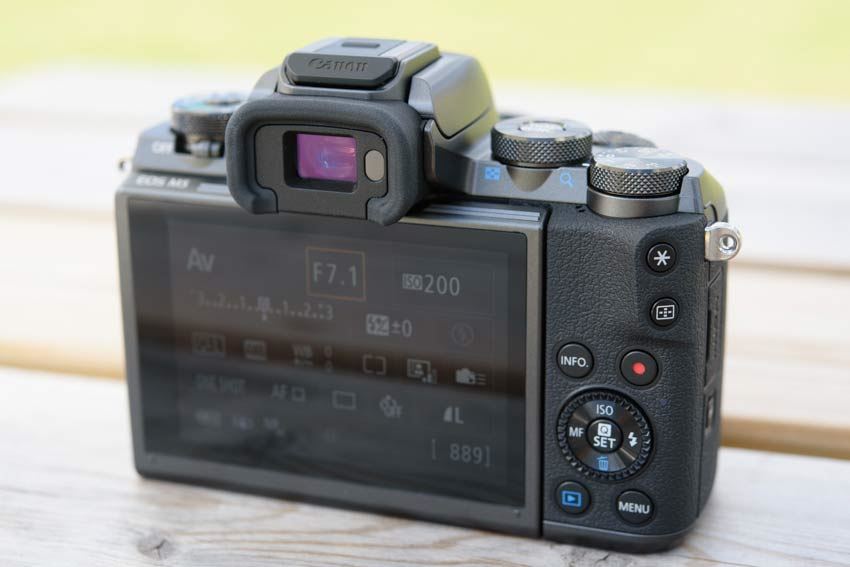 Although many advantages usually attributed to new processing engines can be difficult to appreciate unless directly comparing cameras side by side, the benefits of the DIGIC 7 processing engine included here are more apparent.

Burst shooting, for example, has jumped from 4.2fps up to 7fps (or 9fps when boosted). In-camera Raw conversion is also now possible.

Something else that's easy to appreciate is the way in which the design of the camera has made the new Touch AF feature very usable. 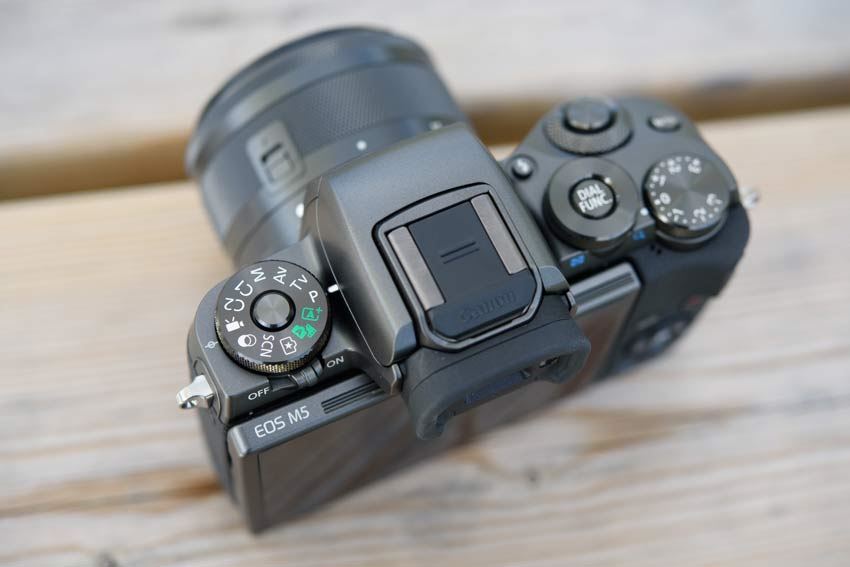 The viewfinder's extension makes it easy to use the Touch AF feature. This also means you don't smudge the screen with your face

Some other models with a similar feature have suffered from the screen not being accessible enough when using the viewfinder. On the Canon EOS M5, however, we found it possible to drag your thumb across the screen without any issues.

If you prefer, you can choose a specific area of the screen to use for this function, although we found the default 'whole-screen' setting to work perfectly well. This action also highlighted the sensitivity of the screen and the speed with which you could do adjust this as the situation changed. 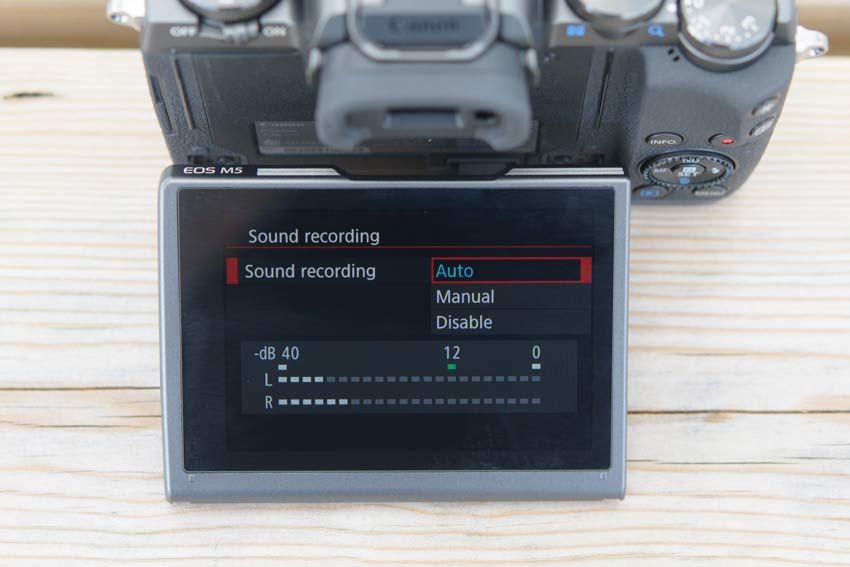 The screen is higher in resolution than the M3's. It can be adjusted with greater flexibility

Scrutinising the spec sheet also reveals a handful of further upgrades. The resolution of the LCD screen on the rear has jumped from 1.04million dots on the M3 to 1.62million here, for example.

The mechanism on which it's mounted has also been revised. On a practical level this makes it easier to view from below when held above head height, moving easily as it is tilted but staying well in place once adjusted.

We found its clarity to be very high and good visibility maintained in bright sun. It also appeared just as sensitive when navigating the menus as it did when being used with the Touch AF feature. 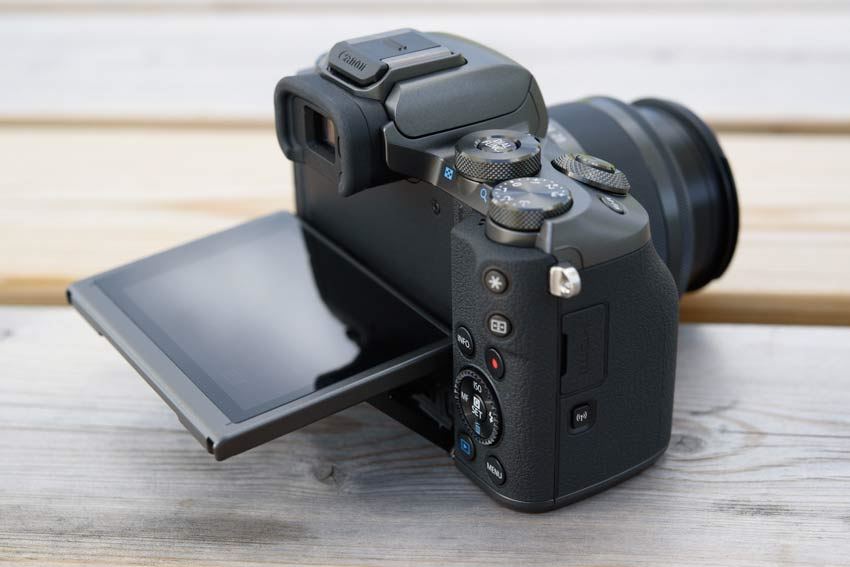 One of the main criticisms of the previous models concerned the AF systems, so it’s welcome to see Canon’s Dual Pixel CMOS AF system here. This system is made possible by the inclusion of two photodiodes per pixel, rather than the usual one, and this allows it to perform phase-detect AF. It’s also the same system behind the Dual Pixel Raw mode seen on the EOS 5D Mark IV, although that option is currently confined to that model.

This feature, which we first saw in the company’s DSLRs, helps to deliver faster AF speeds than those managed by most contrast-detect AF systems (although many models now use a hybrid of the two). The other advantage of this system is that it can track subjects smoothly while recording video. Contrast-detect AF systems work by finding the point at which contrast is highest, and this necessitates a back-and-forth motion, which does not bode well for professional-looking videos. 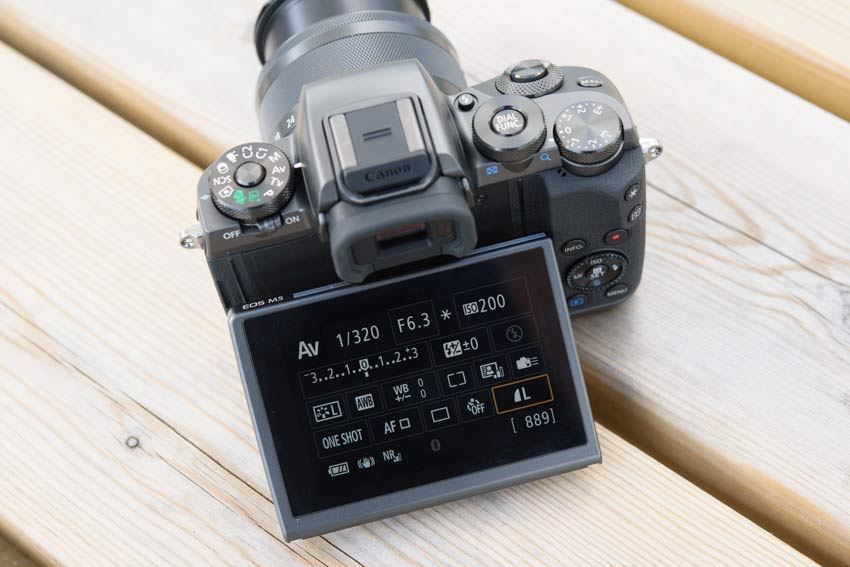 We only had the chance to test the system against static subjects in bright conditions, but it appeared to do very well, with no sluggishness or hesitation. It will be interesting to see how well this performance is maintained when tasked with darker scenes and low-contrast subjects (although we've been impressed with how well this works in Canon's DSLR line so we have high hopes for something similar here).

The Canon EOS M5 is constructed primarily from polycarbonate. As a result, it weighs just 427g with its battery and memory card (but not lens) in place. With the EF-M 15-45mm f/3.5-6.3 IS STM kit lens it appears very well balanced in the hand, with the lens's collapsible construction giving it a reasonably small footprint when stowed. Despite the camera's compact proportions the large grip allows it to fit it well in the hands. Furthermore, the liberal use of rubber means that it does so comfortably. 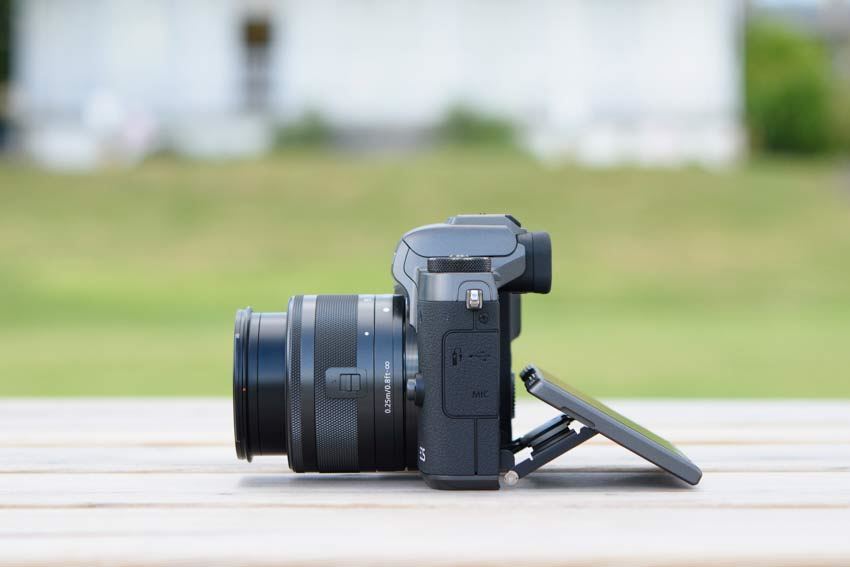 There's plenty of rubber around the camera for comfort and security

The mode dial on the top plate follows the trend of having a locking button in its centre. This helps it to stay in place and works perfectly well, although we did find it a little awkward to get enough purchase around the ring's circumference when turning it. If you only ever tend to stick to one exposure mode, however, this won't be a problem.

This ring is joined by three others on the top plate. Canon has finished each to a high standard, with milled sides to make them pleasing to operate. The rear menu-pad dial also moves fluidly, which speeds up menu-option selection. 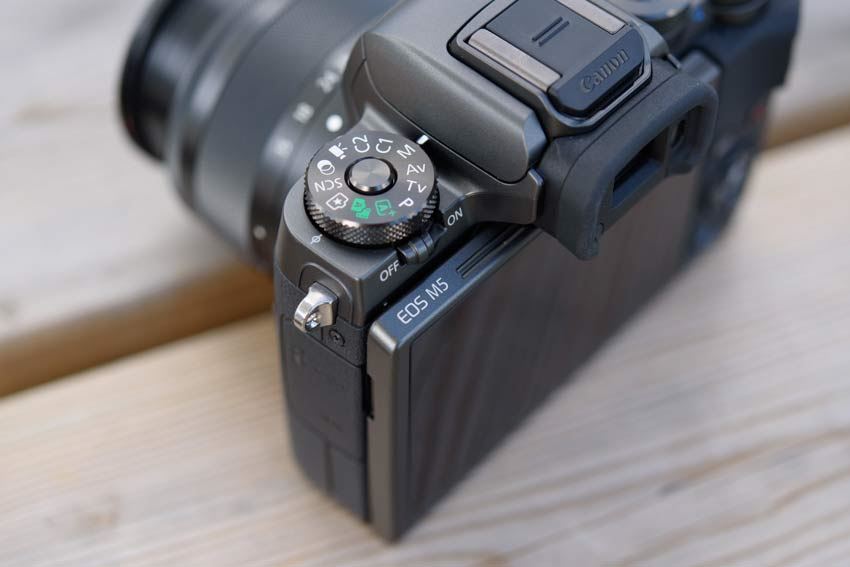 Canon appears to have taken criticisms of previous EOS M series models on board to craft a fitter competitor to the likes of the Fuji X series and Olympus OM-D line.

The DIGIC 7 processing engine and Dual Pixel CMOS AF system has given burst speed, AF performance and video recording a boost. The design of the body also provides great handling and better support for longer optics and weightier EF lenses used with the EF-EOS M Mount adapter, while the arrival of the new EF-M 18-150mm f/3.5-6.3 IS STM lens is also encouraging, particularly as it provides an all-purpose solution for travel photographers (together with the Tamron 18-200mm f3.5-6.3 Di-III VC).

For those that may have been put off by the EOS M line's focus on the more novice end of the market, the Canon EOS M5 will no doubt be viewed as a step in the right direction.