A Guide to Metering 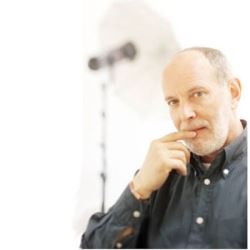 I’m still receiving a lot of emails asking about the merits of buying a flash meter and how to get the best out of them. To answer some of those questions I thought I would write a short piece about the subject that gives some general guidance. I don’t want to sound like a school teacher, but some tips on metering will hopefully be helpful too.

So, let’s start at the beginning. Despite pretty much every camera having its own built in metering system these days, meters are still a very handy tool, especially in the studio as it is here that meters really come into their own. Of course you can shoot test after test after test, but what a waste of time when you can just fire the flash, take a meter reading and transfer the information to the camera.

In the emails I’ve had recently, people tell me that they find setting up studio lights "complicated", that is can be "difficult to get the right exposure" or "hard to get the right balance", and that they "can’t get rid of shadows" and other lesser problems. Using a flash meter properly can solve all these problems very easily.

I’ve also had some emails asking me how to set up flash meters - what happened to instruction books?! Setting up a flash meter for the studio is not complicated and only takes a few simple steps:

How to set up your flash meter

I always use 200 ISO and 125th of a second because we are shooting with daylight balanced flash tubes, so 200 ISO should be fine on a ‘sunny day’. 125th of a second, because using a slower shutter speed will provide the ‘window’ we need to compensate for all the minor delays there are. First there will be a delay when the camera triggers the flash head, then there will be another delay when the first flash head fires and triggers other flash heads via their built in slave cells, so using 125th will allow for these.

So, with the meter set up and ready to take readings, how do we actually use it? Well, we use a flash meter to take an incident reading, which is the amount of light that falls onto the subject. To do this we use the white plastic dome on the meter, which is called the lumisphere. The white dome is positioned somewhere on the subject and pointed straight back into the light source, so that when the flash fires, it will give a precise measurement. Ideally the meter should be placed on a lighter part of the subject, for example the skin, or light coloured clothing. We want to measure this area in particular so that we can find an aperture to expose for those highlights.

We already know the ISO and shutter speed we are using, so all we need is to set the aperture to achieve the correct exposure. We can do this in two ways. First take a meter reading and then adjust the power to give us a ‘preferred’ aperture, or you can meter and use the aperture the meter tells us. Let me explain further:

Let’s say that we are in our studio and are shooting a simple head and shoulders portrait. For our main light we are using a flash head with a brolly about two metres in front of the subject. This will give us a nice, soft even light over a wide area.

Using the first metering method is straightforward; say that we want to shoot at f11 (our preferred aperture that will give us a good sharp image using a smallish aperture) we connect the meter to the flash head with the brolly, walk over to our sitter and position the meter in front of the face, pointing the white dome back into the middle of the brolly and fire the flash. Say the meter reads f5.6. We then go back to the flash head and turn up the power by two stops and take a second reading; f11, job done.

The second method is even easier. When our sitter is nice and relaxed we adjust the modelling lamp on the brolly head until we are happy that we have enough, but not too much light on the subject. We take our meter reading as before, back into the brolly and the meter reads f8. We set that aperture on the camera and get the perfect shot, so far so good.

Studio lights. Got more than one?

Working with one light is very simple, but how do we meter when we have two or even three lights? Again, let’s use the example of shooting a simple portrait. We are using a brolly as our main light set at f8, but there is a shadow behind the subject. By using a second head, we can even out the shadow using a variety of accessories. Let’s say we use a second head with a small soft box, placed about one metre from the background, just out of camera shot to one side of the sitter. This soft box will provide the light we need to get rid of those shadows behind the subject. 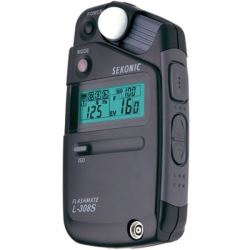 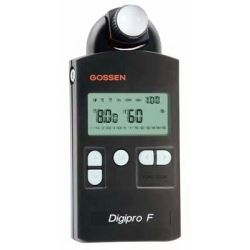 All we need to do in terms of metering is adjust our background light to a stop less than our main light; this should be enough power to eliminate any shadows. Don’t forget that our main light with the brolly is also lighting the background, so we don’t as much power from the soft box.

To do this, we need to turn our main light off, connect the meter to our background light and take a reading. We need to position the meter on the background, pointing directly towards the soft box and if necessary adjusting the power of the head until our meter reads f5.6, a stop less than our main light. When the picture is taken, the main light and background light fire together giving us a nice evenly lit image with no shadow.

Adding a third light to our set up is just as simple. Let’s say that we wanted to add an effect light to bring out some extra detail in the subjects hair, a ‘hair light’. We position our third head, fitted with a Grid reflector and small Honeycomb about 2 metres away from the subject, in line with the subjects shoulders pointing slightly down towards their head. By turning the other lights off, we can use the modelling lamp on the effect light to make any fine adjustments for the best position.

In terms of exposure, a lot will depend on the colour of the hair you want to light. Light coloured hair, especially blonde and grey will need much less than say black or red. So at this point we would turn our main light and back light off and connect our meter to the effect light. When we are happy with the way the hair light is positioned we take a meter reading from the top of our subjects head back into the Grid reflector. Ideally we should be looking for about f5.6, a stop less than our main light.

The next step is to take a test shot so that we can get an idea of what’s going on. Using an effect light is straightforward, but bear in mind that the main light with the brolly is also lighting the subject’s hair, plus we may get some ‘bounce back’ from our background light. So don’t be surprised if our hair light is a shade too bright. If it is, just adjust it down to compensate.

Now we should be getting all three lights to work well with each other to produce a nice evenly lit shot with some extra light to bring out that hair detail, simple as that. Using a meter has really helped us achieve a well lit portrait quickly and efficiently without any major problems.

For those of you with meters, try these simple techniques. The key is to take it slowly and build up your lighting one head at a time. That way you will always know what’s going on and will be able to see from your test shots what if any adjustments need to be made.

I’ve used quite a few different meters over the years, but for basic work, you can’t beat the Sekonic L-308S Flashmate. Very reasonably priced, it’s a bargain. Another of my favourites is the Gossen Digipro F, a meter that’s been around for some years now and offers a very good spec for not too much money. (See images of these two models above.)

Meters are still great value and really haven’t increased in price that much over the years. There are some superb models on the market and both Sekonic and Gossen make some of the best. When deciding what to buy, as usual think about it as a long term investment, something that will last you for a number of years so buy the best you can afford at the time.

Some models have loads of additional features that make them easier to use, like built in triggering, digital read out’s etc so make sure you understand exactly what they do before you buy them. Carefully check out the specifications that each model offers and match those against your own needs and that way you’ll get the right meter for you.

If you have any questions about flash meters or any flash related topics, please drop me an email at: [email protected]