I’ve been getting some emails and questions about shooting food recently and remembered that my chum Chris Reeve shot some really nice stuff for a book last year. I asked Chris if we could meet up and talk about some of his photographs and get some tips on lighting food.

In fact some his food photos were featured in the March issue of Professional Photography magazine under the title of Gastroporn! The images Chris shot, not just of food obviously, were used to illustrate a book of classic recipes entitled ‘Posh Food for the Common Man’ written by chef and restaurateur Mark Baumann. The book project was self funded between Mark and Chris, no huge advances from a publisher here and it took them over a year and a half to get everything done. Some of the images were taken in Chris’s studio while others were shot in Mark’s restaurant in Coggeshall, Essex and others on location in France.

I was particularly interested in the studio shots and when I met Chris he had already chosen a few images to talk about. He told me that all the food for the studio shots was cooked on site and photographed as quickly as possible. Nothing was added to the food to enhance either its look or colour as both Chris and chef Mark wanted everything to look as natural as possible.

Chris shot most of the images using Bowen’s heads, either 250 or 500 DX’s with a range of accessories depending on the size, shape and colour of the food. He used both his D2x and his favourite ‘little’ Leica to shoot the images.

This first shot of a meat dish was taken using two Bowens 250 DX’s both fitted with Snoots and Honeycombs.  Chris used one light behind the dish to back light it, while the second head was in front pointing down from the left. He also used a mirror to reflect the backlight into the dish. As he said, it gives the image a very natural look. 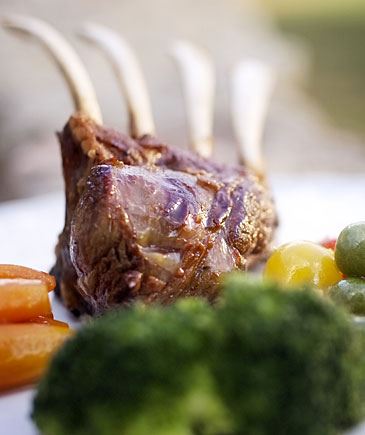 The next shot of a salmon recipe, was taken using one Bowens 250DX fitted with a Wide Angle reflector from the left hand side and a white hand held reflector about 20 inches diameter to bounce the light back into the subject. 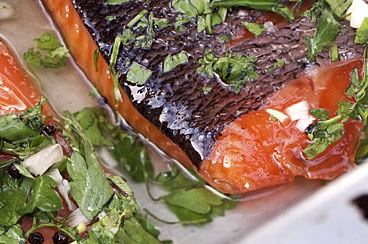 Salmon shot with one 250DX with a Wide Angle reflector, and 20inch Handheld reflector 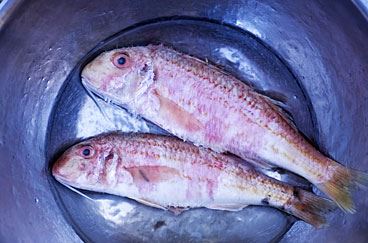 Another fish dish, a beautiful shot of two red mullets, very simply photographed with a Bowens Ring Flash and Quad 2400 pack. Chris told me that he shot this just outside the studio in partial shade under a very blue sky. He did this because he wanted to get some colour into the neutral colour of the silver tray. To light the image, he used a Bowens Ringflash on a Quad 2400 at its lowest power to just add a little 'kick' of light.

A beautiful shot of a dream pudding! This was taken with a DX 500 and brolly from the front side and a second 500 DX to back light the white tablecloth. Again the lighting Chris has created looks so natural. 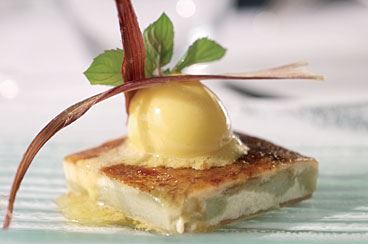 Finally, a shot taken with two Bowens 250DX's, fitted with Grid reflectors and the widest Honeycombs. They were positioned at 45 degrees either side and above the plate with a small white 20inch reflector just under the lens used to balance the light. 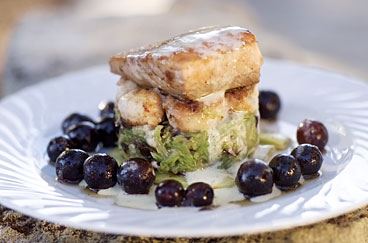 As Chris said if anyone is going to shoot food they must have a plan. “There are so many decisions to make apart from shooting the dish itself, you have to think about the size and colour of the plate, what to shoot it on, whether to add cutlery, glasses, serviettes the list goes on and on. It’s easy to get carried away and if you’re not careful you just loose the plot. Even when you have decided on the whole look, it may not shoot well and you just keep trying different things until it works”.

This is why the book took over a year to shoot, every shot had to be planned photographed and then honed until every detail looked right to both Chris and Mark. But talking to Chris it was one of the most demanding and enjoyable projects he’s done for a while and he doesn’t regret the time he gave to the book.

So Chris’s top tips for food photography “use accessories like the Bowens Grid reflector and Honeycomb set, or the Snoot and Honeycomb, both are ideal tools to shoot food. They can both keep the light in small areas and are very easy to control, small hand held reflectors and mirrors are also very useful”.

You can see all of Chris’s food and other photographs in the book:
"Posh Food for the Common Man" by BaumanHattonReeve
Published by Baumann Hatton Reeve available via Amazon.co.uk

My thanks to Chris Reeve at reevebanks photography.