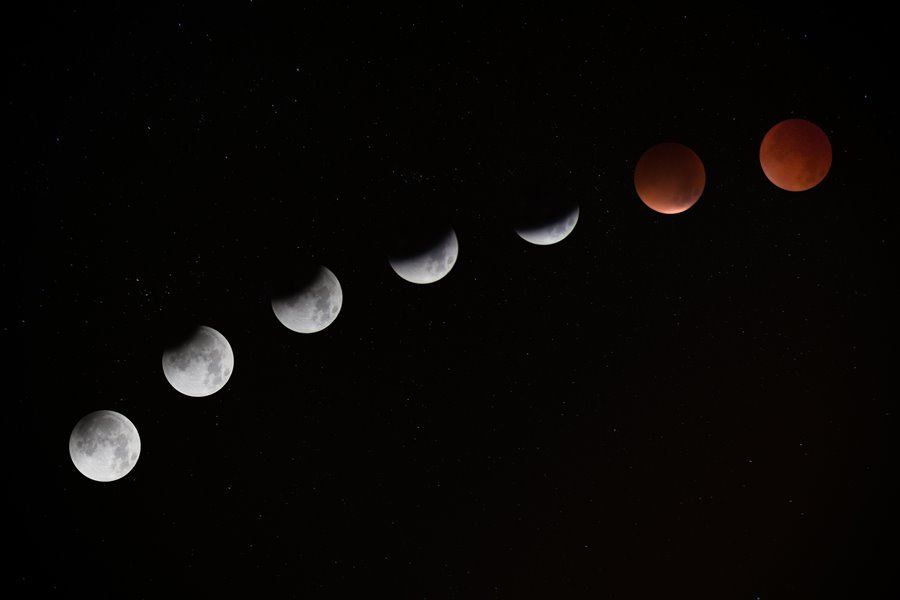 In the early hours of January 21st, the UK will witness a total lunar eclipse – otherwise known as a blood moon. This will be visible across the whole of the UK and is a sight that we’ll not seen again until May 16th 2022.

What is a lunar eclipse?

A lunar eclipse occurs when the moon, Earth and sun align, and the moon passes into the Earth’s shadow. For the UK this will be a total eclipse, but despite the moon passing fully into the Earth’s shadow, it doesn’t disappear or go black, it actually turns blood red. This is due to the sun’s light being bent around the Earth via the shape of our atmosphere (refraction), this affects red light more than blue or green light.

There’s a reason we love talking about the weather, because we can experience all four seasons in one day! In particular, the British weather loves to trip us up for events such as this. We spent all summer enjoying glorious sunshine, got our first astro event of 2018 and guess what? We experienced heavy rain and some of the most impressive storms I have seen in years…

To get the best out of these events, be prepared to travel so you can find breaks in the cloud. Long-term forecasts are notoriously inaccurate, so don’t rely on them, use them as a rough guide. I always monitor the satellite maps that track cloud, this way you can see where or if there are any clear patches around, and where they might hit (SAT24 is an example of this).

This was the approach that I followed for the solar eclipse in 2015, which resulted in a trip to North Norfolk so I could stand in the middle of Holkham Beach. However, it paid off and I was able to catch the eclipse when most of East Anglia missed out. 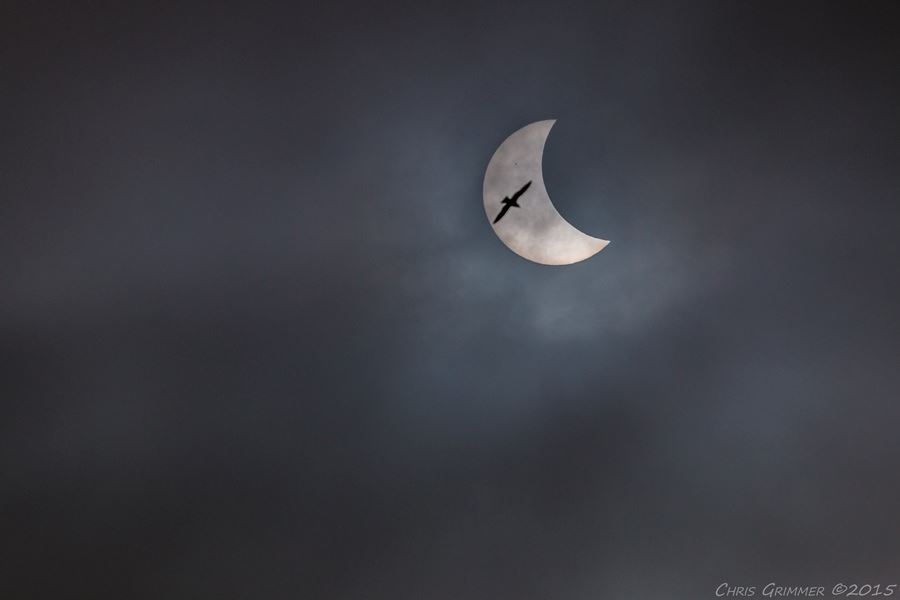 A partial solar eclipse being photobombed by a seagull. Chris Grimmer.

Going for the close up

If you’re looking for a detailed close up of the blood moon, then a telephoto lens or camera and telescope setup is preferential. You might be surprised at how small the moon appears, even when using a 400mm lens on a crop sensor.

A lot of the highly detailed moon images you see are produced using a long-focal-length telescope and a high-speed camera (webcam), while stacking the images (sometimes shooting in excess of 100 frames per second). This method cuts through some of the turbulence in the atmosphere and by stacking the best images, can produce excellent results.

Although this approach isn’t available for most of us, don’t despair. A telephoto lens, DSLR and a sturdy tripod will still produce excellent results. 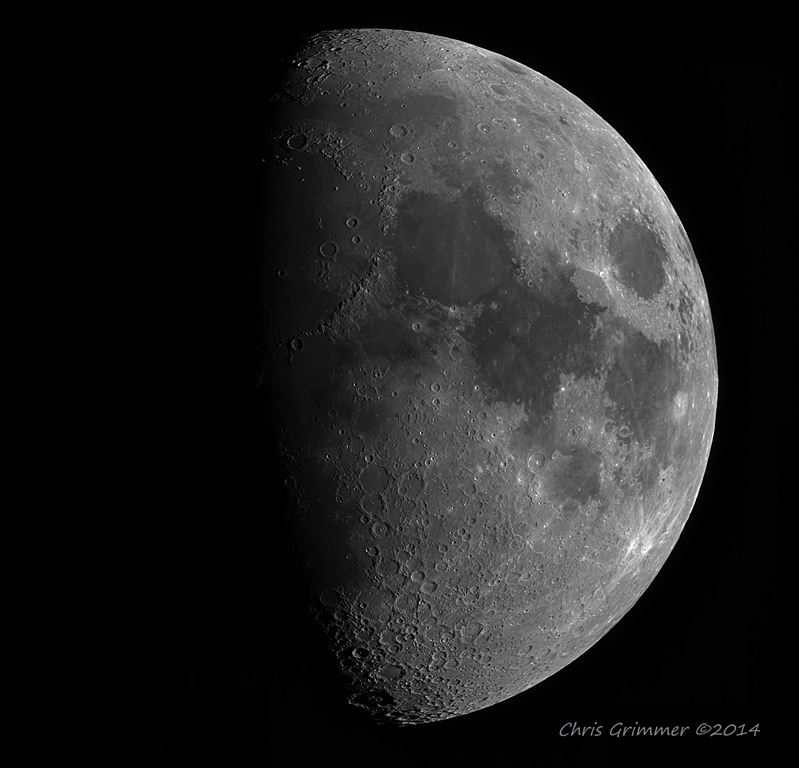 This is a 13-panel mosaic, captured with a webcam-type camera via a telescope at a focal length of around one metre. Each separate image is made by stacking the best 10% of around 3,000 images (from a two-minute video). Chris Grimmer.

Because the moon is bright and shows contrast, some cameras and lenses will autofocus on it. If this is proving troublesome, zoom in live view as far as you can and gently adjust your focus accordingly. If your lens has a distance gauge, setting it to infinity is a good starting point, but don’t assume this is 100% accurate.

Set your ISO low to keep noise levels to a minimum, this will help keep the image clean as you may need to work on it when post-processing. Set your aperture to somewhere around f/8 or f/10, and then adjust your shutter speed so you’re not overexposing the brightest areas (live view can help here). If your shutter speed is too slow, simply adjust your ISO and aperture to keep it above 1/100 sec. 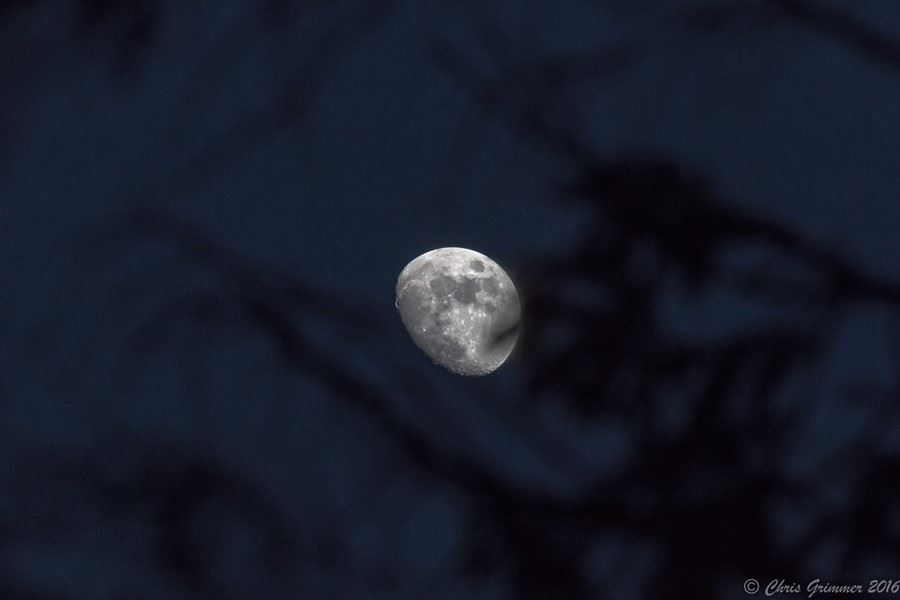 If you’re not looking for that detailed close up, then even with astrophotography the foreground is key. My advice for photographing the moon as part of a scene would normally be to capture the moon when it rises or sets during the twilight hours. This provides the nice balance of a bright enough foreground and a dim enough moon in one exposure, without much post-processing required. 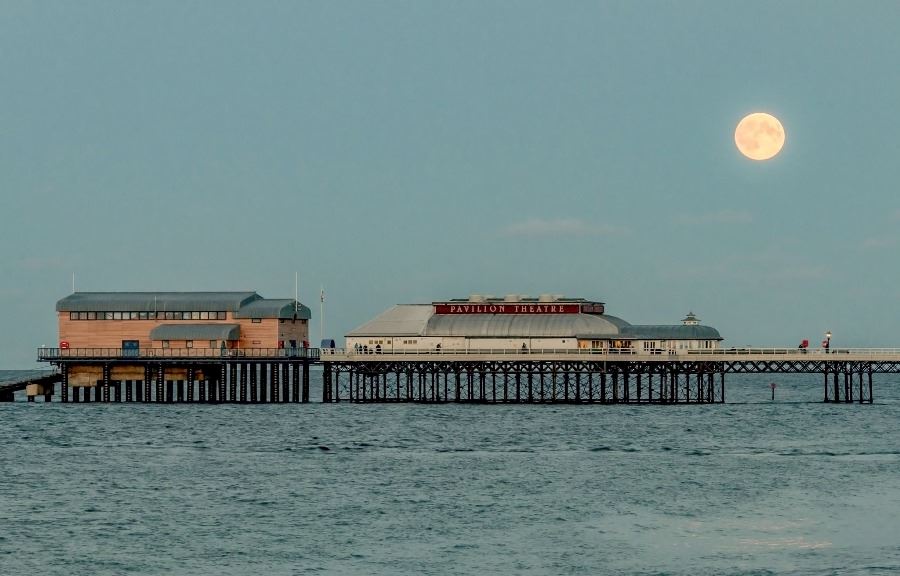 The whole eclipse falls within astronomical darkness, so unlit foreground objects will be shrouded in almost total darkness. For close foreground objects, light painting with a torch might work. However, this year, I will be trying to use the astronomer’s enemy to my advantage: light pollution. Artificial lighting is prevalent in towns, cities and even the countryside, so use it to your advantage. Do you have a vantage point over a cityscape, seaside pier or even an industrial landscape? Use the bright lighting from foreground buildings and street lights to help you balance your exposure settings, and capture both foreground and moon in one shot.

The year I was shortlisted in the Astronomy Photographer of the Year competition, three of the shortlisted entries in the People and Space category depicted moonrises over the following scenes: an amusement park, dockland cranes and (my entry) Cromer Pier. The first two examples both used artificial lighting to their advantage. 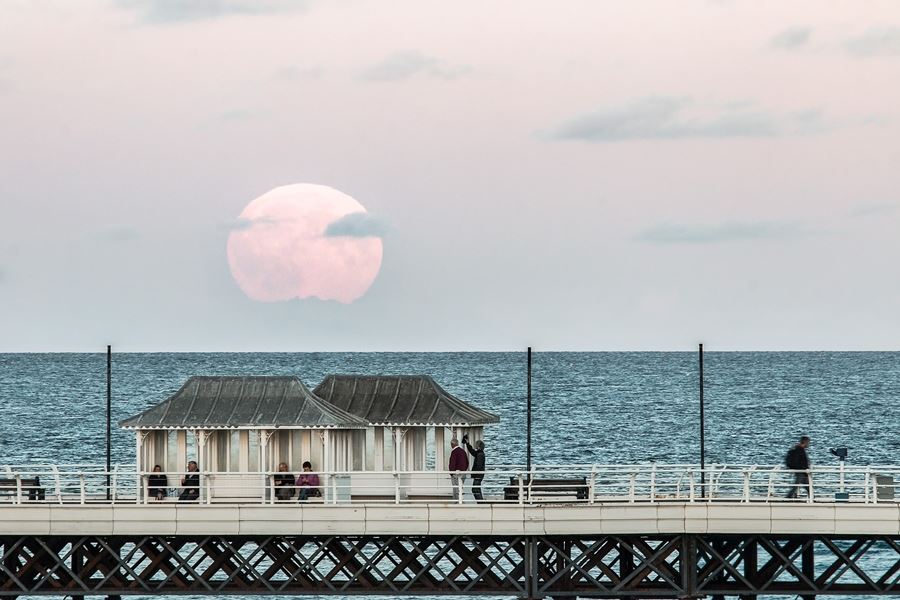 Supermoon Rising, this was my shortlisted entry in the Astronomy Photographer of the Year 2015. Chris Grimmer.

The lunar eclipse on Monday coincides with what the media will call a supermoon. To be fair, this doesn’t mean much in practical terms as the moon will only appear around seven percent larger than normal – no real noticeable difference to the eye.

The key here is to use longer focal lengths to keep your foreground objects at a greater distance. This trick fools the eye into perceiving the moon as larger than it actually is. This could, however, prove problematic as the moon will still be reasonably high during the eclipse phase. The potential here could be multiple shots stitched together to form a mosaic, but don’t be afraid to experiment.

Long gone are the days of having to study charts to work out where and when the moon will be visible. Nearly everybody has access to a smartphone or PC these days, and there is a multitude of free and paid for apps and websites available to us. These can be fairly simple star guides to fully interactive apps. Both can save you a lot of time and disappointment.

Some of the paid for apps will allow you to place pins, and will show you exactly what direction the moon will be in and at what height. Some will even use your phone’s camera to show you where objects will be in relation to what the camera can see, overlaying the moon’s location on the live video. This gives you the ability to plan ahead and scout out potential locations beforehand.

I will always visit a location in daylight first, so when arriving in the pitch black I know what’s there and where to go. There’s nothing worse than discovering a tree is blocking your view or that a crane has been erected since your last visit (which happened to me, with my image from Cromer Pier). If you’re unable to visit a location beforehand, see if you can identify a few other options nearby. It’s always a good idea to have a plan B or C, just in case…