Everything Was Moving: photography of the 60s & 70s 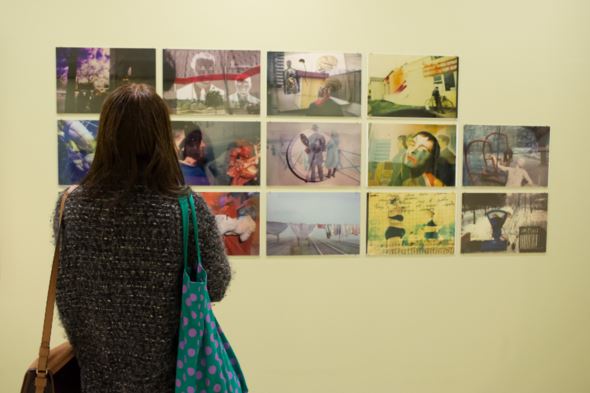 Everything Was Moving is the title of the latest photographic exhibition at the Barbican Centre in London. The exhibition documents two decades; the 60’s and 70’s through the lenses of twelve influential photographers and each one shows us a window through which we can view those turbulent times.

The exhibition is certainly on a large scale and is located on two levels, the work beautifully arranged with separate spaces for each contributor. It’s so large, that rather than write a little about each one, I’ve selected a few of the photographers whose work I think best reflects the title, or is worthy of a mention.

In South Africa and America, both then dominated by racism and segregation, subtle changes were beginning to take place. In Vietnam the war against communism, East versus West developed into a battle of neo-colonial power. In other countries around the world, social and political changes were also evolving. It's against these shifting backdrops that each photographer has tried to capture the ground breaking events, or just document the mundane day to day lives of the ordinary person who lived through them. What the viewer sees here through the lenses of these men and women is documentary evidence of the travails and turmoil of the ordinary person trying to create a change for better.

The American photographer, Bruce Davidson, shows the travails and movement only too well. Davidson joined Magnum in 1959 and had already documented a number of stories before shooting the very beginnings of the civil rights movement.In a series of lovely black and white images, taken on the move whilst on a ‘Freedom Ride’. This was a perilous journey made through the southern states of America and his images show groups and individuals obviously hostile to the impending changes. The white onlookers protected by the police, the National Guard, trying to protect the erosion of the status quo. Its chilling stuff to look back on, but thankfully, Davidson’s stunning images will never let us forget the supreme sacrifices made by individual men and women to achieve what must have seemed an impossible goal at that time. 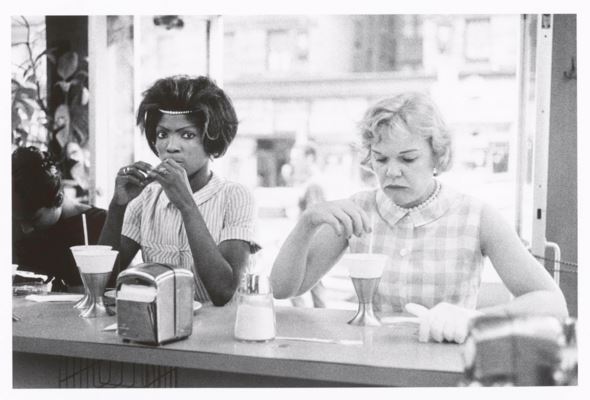 It’s interesting that the work of both Ernest Cole and David Goldblatt are almost a mirror image of Davidson’s and document a black underclass. The work of Ernest Cole, a black South African himself, describes life under the brutality of the apartheid regime. Although self taught, some of his images are beautifully composed. Two images in particular, one showing a middle aged white woman seated gracefully on a park bench marked ‘Europeans only’, stencilled neatly in white paint epitomises the conflict to perfection. The other image is more chilling and shows a close up of handcuffed hands, two men arrested for being in an area exclusive to whites. David Goldblatt, a white South African, shows work that depicts the grim day to day life of black miners in a series of beautiful black and white images. One particular image that I wont forget, is that of three white men, each seated on a white horse, shot front on and close up, the men looking down at the camera. It’s a striking composition that totally conveys the underlying sense of brutality and white supremacy of the apartheid regime. 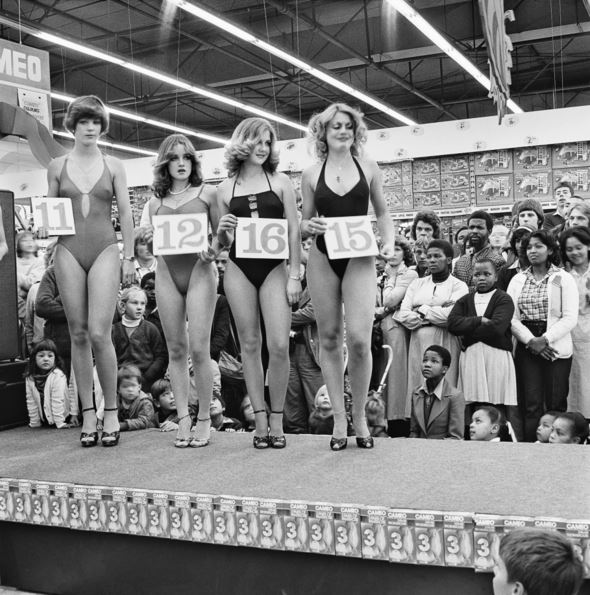 Larry Burrows documented the worst of the Vietnam War for Life magazine, living, eating and sleeping with front line troops. Through his lens, he captured moments of intense stress, grief and compassion shown here in a series of very large, arresting, colour images and believe me, once you’ve seen them you wont forget them. His images of individual soldiers somehow manage to capture an incredible sense of stillness and serenity, soldiers who have seen and done terrible things. Sadly Burrows was killed before the war ended when the helicopter he was travelling in got shot down. In fact, there were three other photojournalist’s killed in the same crash. For us, the legacy of his work will always be a lasting tribute to the photographer’s skill, courage and dedication. 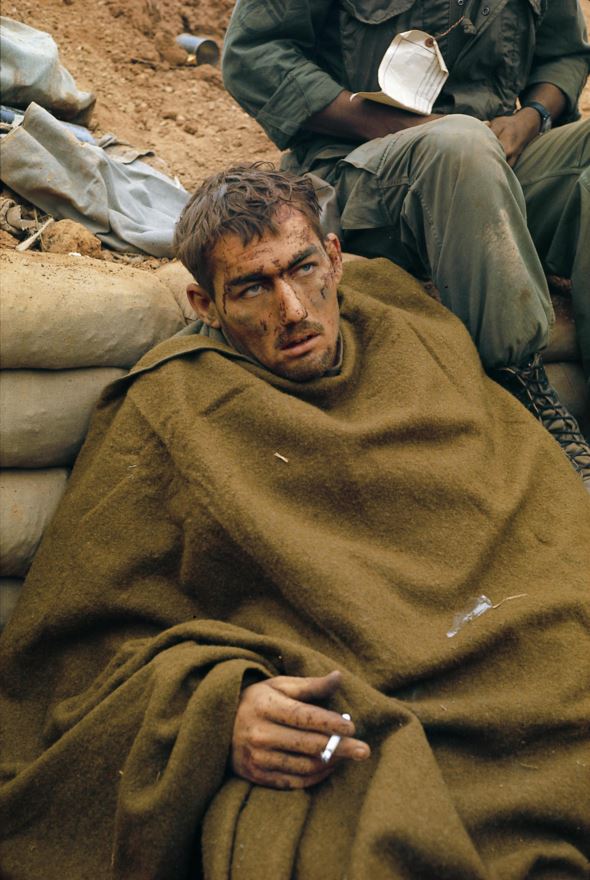 The work of Tennessee born William Eggleston has always been a mystery to me; I just don’t 'get' him in the same way my wife doesn’t get John Coltrane! I’ve read many reviews of his work and critics seem careful in their appraisal of him. The exhibition guide says that he, “perplexed critics at the time with his seeming lack of subject matter; lack of a photographic or political agenda and the casual, snapshot qualities of his images”.  The guide then goes on to say that, “he is now widely viewed as a brilliant innovator who revolutionised photography with use of color and his ‘war on the obvious’”.

Two conflicting descriptions of the same man and the same work, which is the right one? I don’t know. The work on show is a mixture of large individual color portraits; all of white people, all untitled and a further series of his trade mark abstract images of cars, buildings and fragments. There are probably a great many advocates of the great man out there, and I don’t want to offend any of you, so please come and view the work for yourselves and be the judge of it.

Graciela Itubide the Mexican born photographer, whose work I’ve followed since the early eighties has documented the lives of the indigenous peoples of Latin America. Her work is incredibly beautiful and has a very spiritual feel to it. Influenced by Cartier-Bresson and Koudelka, her wonderful black and white compositions of women shot individually or against the vast backdrops of deserts are all visually stunning. 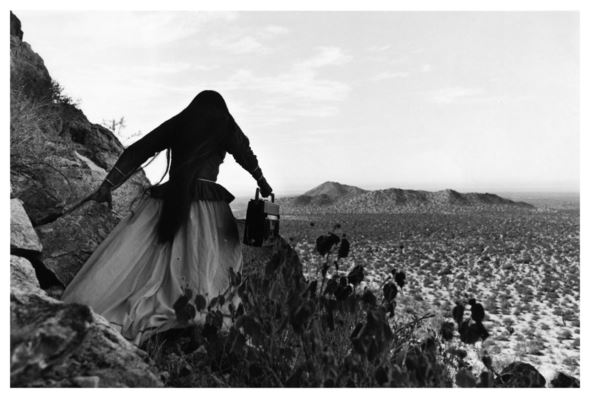 I felt that the work of Sigmar Polke, a series of large images depicting a staged fight between two dogs and a black bear, shot near the Khyber Pass seemed a little irrelevant. There is a vague reference that the black bear is an emblem of Russia, and so the conflict between Russia and Afghanistan is somehow represented, but compared to the other contributors, the images didn’t have the ability to move the viewer, not this one anyway.

The biggest surprise of the exhibition is that the UK itself is not actually represented. After all, the swinging 60’s and the 70’s were the two decades when everything surely moved, its influences felt the world over. We had mods, rockers, fashion and the beginnings of youth culture. On a more serious note, in Northern Ireland, the Campaign for Social Justice was launched in January 1964, the start of a long and bitter struggle for the Catholic minority.

All in all though, the exhibition works well, fulfilling its objective, by using the work of the contributing photographers to show us pivotal moments in history. I was a little confused that some of the images on show were actually taken in the eighties, rather than the two decades in the title, but that’s a minor quibble.

But the important aspect of the exhibition is to be able to view these original photographs hanging in a gallery space. It’s not often that we get the opportunity to see the photographic image in this way. Because we are more accustomed to seeing work reproduced in books and magazines and often on a much smaller scale. To see work hung, as it should be in a gallery is really an opportunity not to be missed. I hope you can spare the time to visit the Barbican and enjoy the exhibition for yourselves; you won’t be disappointed, I can assure you.

Finally, it’s a sad fact that the theme of this exhibition could be staged for any decade in the 20th or 21st centuries. It seems the turbulence and relentless movement in the world has never ceased, nor it seems will it. Photographers have always had a central role in documenting the world around them and will continue to do so. It seems fitting to pay tribute to them for putting themselves in great danger, to be able to show us the cruelty of war, the atrocities of brutal regimes and social injustice . We owe all the photographers of the past and in the future a great debt. To be able to view their work is and will always be a great gift to us all.

The exhibition ‘Everything was moving’ is showing at the Barbican Centre in London until 13th January 2013.
Opening times are daily from 11am – 8pm (except Wed until 6pm)
Every Thurs until 10pm.
More details are available via www.barbican.org.uk
My sincere thanks to Ariane Oiticica at the Barbican Centre for providing the images.