Photographers' Rights: Are you Aware?

It feels like a storm of discrimination is brewing against photographers; many parents can’t take photos of their children on sports day and setting up a tripod near a tourist attraction is likely to attract only one thing – a swarm of security guards. How many disenchanted photographers are out there wondering “Why has photography become a criminal offence?”

A key part of the crisis surrounding the infringement of photographers’ rights is that many members of the photographic tribe aren’t aware of where and what they are allowed to take images of. Continuing to take images in blissful ignorance is a false economy because it’ll be particularly difficult to rebuff anyone who challenges you to stop! 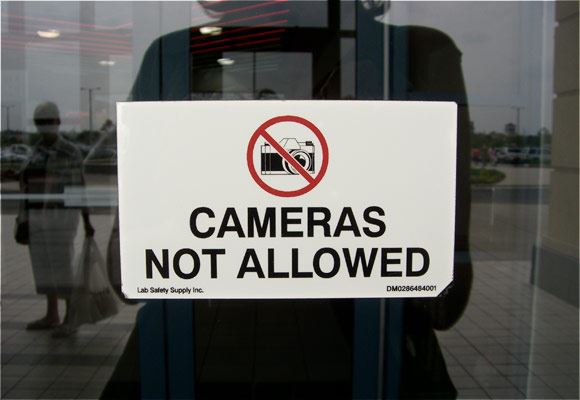 Is this going to become the norm? Image by Wordridden

The Metropolitan Police have also released some handy guidelines for photographers which cover the power to stop and search under the Terrorism Act 2000. A key point to remember from the Met guide is that “officers do not have the power to delete digital images or destroy film at any point during a search.”

There are several interesting e-Petitions on Number 10’s website which range from copyright protection to clarifying the law for photographers:

When It All Goes Wrong

Cases where innocent photographers have been stopped by police officers are being covered in great detail by Amateur Photographer magazine, who’re taking on the rights challenge:

Here’s a short film revealing shocking behaviour by a pair of Police Community Support Officers (PCSOs) and discussion on the right to take photos and video in public areas:

We don’t condone seeking a confrontation, but some photographers are fighting back (with varying degrees of success):

Getting well into my grey panther years, I summoned up a bit of long-languishing young revolutionary spirit on a recent five week walking holiday around England—I thought it would be a bit of a lark to get myself arrested for photographing a policeman, and set out to snap everything in uniform from Southampton to Carlisle. Complete waste of time: none of the coppers so much as raised an eyebrow, and when I began to ask them about the law I couldn't find a single one who had heard of it. 'Sounds a bit daft to me,' was the usual response. And during our stay we saw several televised news items which displayed the constabulary in a far-from-flattering light. When it comes down to it, this may be a bit of a tempest in a teapot.- Comment by David Miller on a post from The Online Photographer.

The British Journal of Photography (BJP) blogged & tweeted about two photographers in the US who approached a building where the security guards are known to be ‘unappreciative of photography’:

No photography, they stated clearly.
Why, we responded. Safety, they said.

You can read about their experience via 1854, the BJP’s blog – please note the title contains offensive language used by the security guards. The BJP do clarify that “in the UK, security guards have no right to prevent photographers from working in front of their buildings, as while it might be a private property, the sidewalk or plaza in front of these buildings are not. The public has a right of way, and unless you somehow prevent their business operations, you are in your legal right to take photos there.”

What do you think?