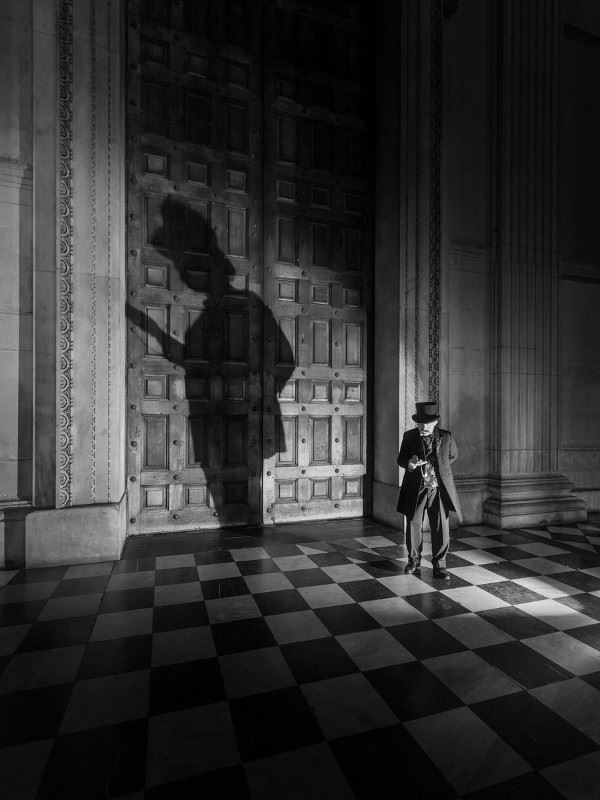 Lighting, atmosphere, clever use of space, interplay of shadow and subject – the tenth winner of our #WexMondays Twitter competition has it all. The judges loved this clever shot by photographer Andrew Robertson, who is also known as @AndrewRPhoto1 on Twitter, and it claimed a deserved win in a week that was replete with exceptional images.

This is the kind of shot that makes you deeply curious as to the story behind it, so we were excited to get in touch with Andrew to get the behind-the-scenes story. Read on as we chat to the tenth winner of our #WexMonays competition – the leaderboard is really hotting up now!

Andrew Robertson: It was shot on the steps of St Paul's Cathedral on a wet March evening. This was shot during a portrait session, a new experience for me. The lighting on the figure was set up for portraiture, but I really liked the combination of the floor, the large door and the shadow, so thought I would take advantage of this for a wider shot.

AR: It was dark, so I used a tripod. Also, the subject was posing for portraits so I opened the aperture to reduce the exposure time and minimise the chance of movement.

AR: I wanted to use the floor as foreground and get a sense of scale with the huge door and shadow, so I used a wide-angle lens. The image was shot on a Canon EOS 5D Mark IV with a Canon 16-35mm lens (at 16mm), without filters but from a tripod.

AR: I converted the image into black and white and put the image through Lightroom. To finish it off I did some dodging and burning in Photoshop.

WPV: You appear to work mostly in landscapes, but this shot is something quite different. How do you approach the challenge of working in multiple different disciplines?

AR: Landscapes are definitely my favourite subject, the mountains in particular, but living in London make this a challenge – even more so at the moment. Having said that, there are so many photographic opportunities in London, so I can't really complain. These days when I go out in London, I like to try and find something original. This isn't always easy, but I was very happy and pleased to come away with this shot.

AR: Normally I try to go out every week for a shoot, but obviously that’s a bit difficult at the moment. I did have some landscape shoots planned, but have had to cancel trips to Scotland and Spain already. As for my next #WexMondays shot, I haven't been out with my camera during lockdown, but I am missing it and do have a couple of local spots, so I may try some get something on my daily exercise.

Andrew Robertson is a photographer based in London – see more of his images at andrewrobertsonphoto.com.

Think you’ve got what it takes to win #WexMondays? All the information you need to enter is right here!