How to Photograph the Orionids Meteor Shower 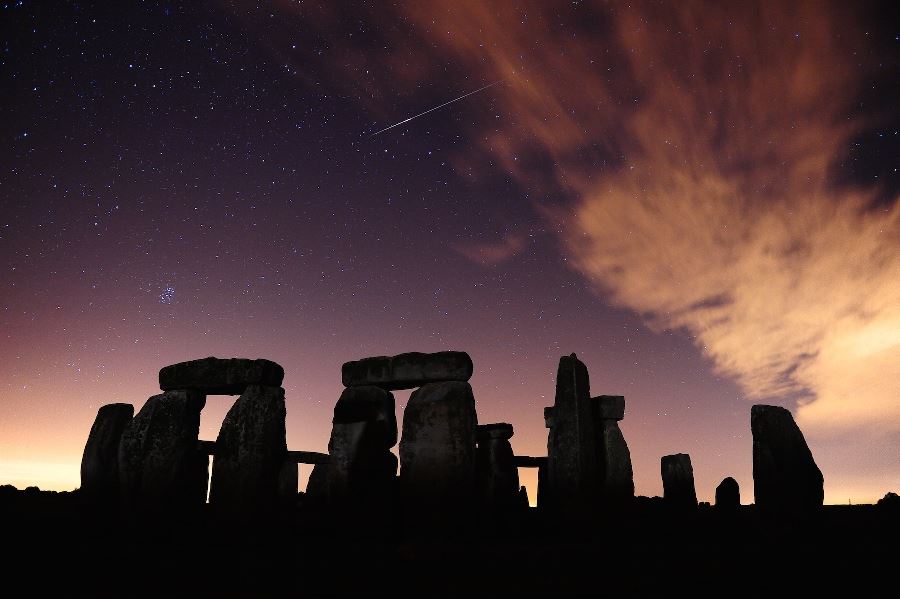 All images by Andrew Whyte

With autumn well and truly upon us, you might be thinking about opportunities to expand your portfolio of night photographs before the cold, damp darkness of winter sets in. The Orionid Meteor Shower is set to peak over the night of October 20th to the 21st, and could give you the chance you’re looking for.

Meteor showers are triggered as Earth passes through the debris trail of different comets, a phenomenon that makes each shower predictable even if the meteors themselves remain random. Tiny grains of space dust from the debris trails burn up, ignited by their glancing high-speed encounters with Earth’s atmosphere.

While the Orionid shower is triggered by residual dust from Halley’s Comet, the event actually gets its name from having a radiant point near the constellation of Orion. Meteors can appear anywhere in the sky, but if you trace back along their trajectory, Orionids will all appear to have emanated from this radiant point. 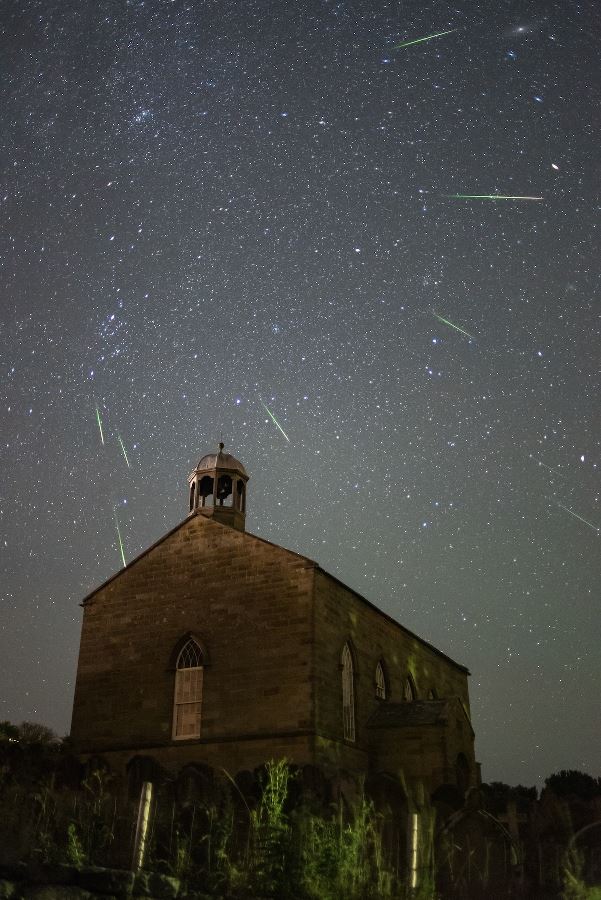 The radiant effect is emphasised in images which overlay several meteors into the same frame. If each streak is extended back the point of intersection will show the radiant

You can expect to witness a maximum of 15 to 20 meteors per hour between midnight and twilight on October 21st, particularly because this year’s peak coincides with a favourable moon phase for optimal dark conditions. If you can’t make time on that particular night, the conditions are presently building towards this peak and will wane for a few nights afterwards.

If you’ve tried long-exposure night photography before, you may already know it can be a curious blend of frustration and elation, with minuscule details marking the difference between failure & success. Trying to capture photographs of a meteor shower is no different, but there are several steps you can take to increase your chances of bringing home a keeper.

When you’re looking up at a sky full of static stars and a meteor passes through your field of view it’s very likely to attract your attention. But the very movement that catches your eye is also the factor that makes it difficult to catch a meteor on camera.

Even if a meteor is magnitudes brighter than the stars you can see, it’s still going to be travelling through your frame at a much greater speed than the stars and thus appear less bright on camera.

The first thing you need to take charge of, then, is location. Get yourself to the darkest possible place, far away from streetlights, traffic and the glow of the city. The UK’s fifteen National Parks are great destinations, often with fantastic landscape features and preserved dark-sky areas. If you don’t have a National Park within reach, perhaps look for a designated Area of Outstanding Natural Beauty, or just somewhere you can be assured of constant, deep darkness. This will let you maximise your light gathering with little risk of over-exposing your image. 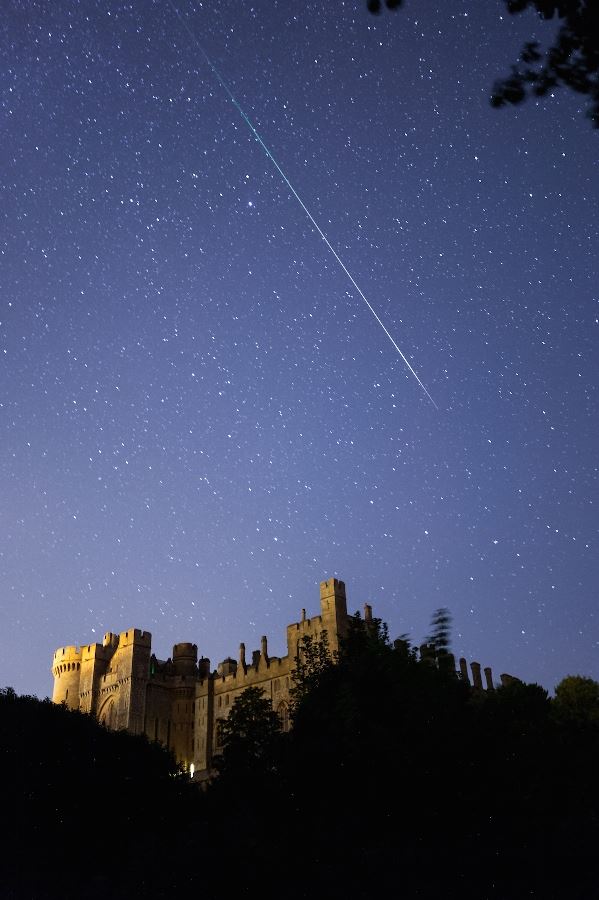 Remember, meteors can appear anywhere in the sky, so your composition doesn’t have to be driven by including a particular area of sky

On location, it can be most straightforward to eliminate any sense of foreground and point your camera straight at the sky. But whether I’m shooting or viewing someone else’s shot, I find images with landscape features provide a stronger result – something with a narrative, not to mention a sense of scale. This approach should deliver a strong night-sky image for your efforts, even if you don’t manage to capture any meteors.

Inseparable from composition is your choice of lens, and there are two factors to bear in mind here. Wide-angle lenses are popular, as their expansive fields of view capture the most sky, thereby offering the greatest chance of recording a meteor. Wide-angles also help minimise any challenges of front-rear sharpness – this matters because you’ll want both your foreground and the starry sky in focus.

However, don’t rule out focal lengths up to about 50mm (full-frame equivalent). Sure, you’re honing in on a smaller section of sky, but any meteors you do capture are going to appear magnified and more detailed.

A further consideration on lenses: you’ll almost always want to use a wide aperture on your fastest lens, ideally something like f/1.4 to f/2.

There are no absolute right or wrong settings, but there are certainly ballpark targets to aim for. With meteors being so dim in lighting terms, it’s worth basing your settings around the highest possible ISO speed at which you’re comfortable shooting. Aim for at least ISO 1600, but don’t be afraid to increase that significantly if your camera and editing workflow can produce low-noise results.

Some of the meteor images I’ve caught on my Sony A7s have been perfectly useable after being shot at ISO 25,600. 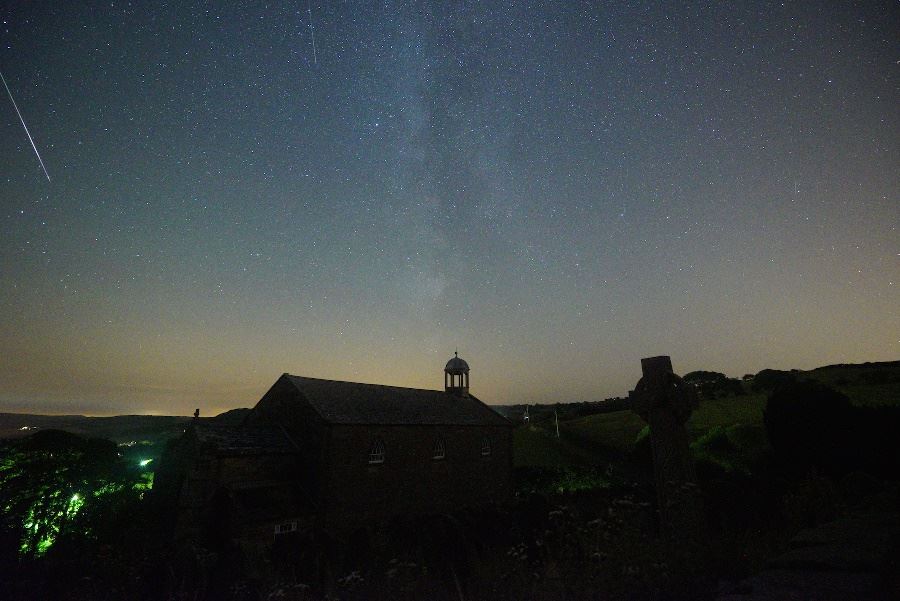 The Sony A7s excels in low-light. A straight-from-camera JPEG at ISO 25,600, f/4 and 10 seconds, from a sequence of nearly 600 frames at the same settings

Next up, set the widest aperture you can get away with – ideally f/2.8 or wider. Now’s a good time to focus. With an illuminated foreground, you should find that your preferred method of focusing still works reliably, so use a torch to throw some light ahead of your camera.

Lastly, shutter speed. It’s guesswork until you’ve fired a test shot, but a starting point of 10 seconds should give you a baseline. Review your test shot for exposure (and focal sharpness) and make further adjustments to suit. In the general darkness, it’s likely that your preview screen will appear bright, so consider your test shot’s histogram when adjusting exposure.

On the flip side, if your 10-second test shot is too bright and you find that you need to shorten it considerably, your location might not be dark enough for anything other than real airborne fireballs, which are somewhat scarce.

Final acts of setting up should include: checking that you’re recording in RAW (for best noise management in post); switching off any image stabilisation systems in your camera or lens; switching off long-exposure noise-reduction functions within your camera; switching off autofocus so that the camera doesn’t hunt for focus after each frame; and double-checking the tightness of all your tripod joints so that nothing creeps while you’re shooting. 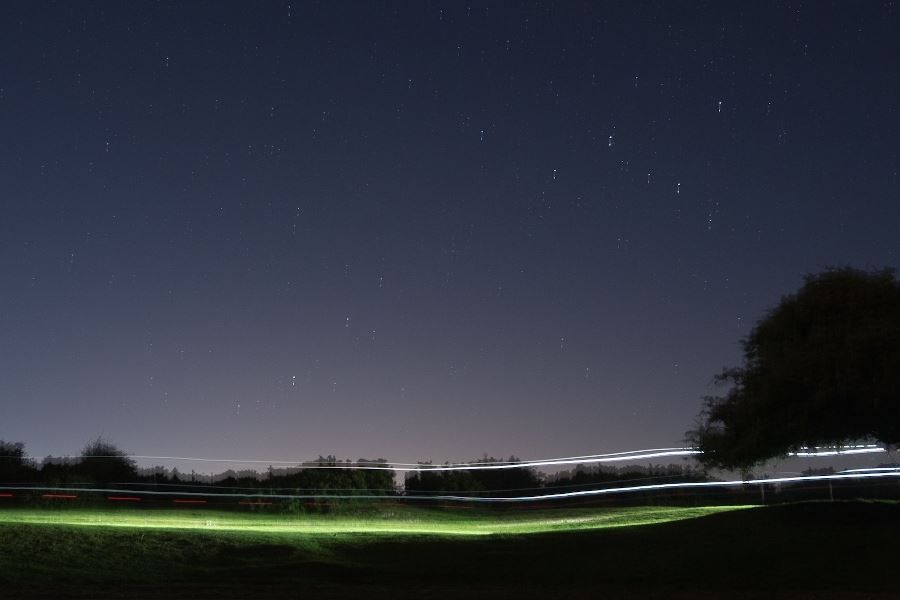 The unpredictable nature of meteors means you’ll be leaving your camera to record the same scene over and over, using a cable release to lock it into a continuous shooting mode. With one shot every few seconds there’s no chance of overwhelming the buffer so it’ll just be a case of shooting until something expires: the battery, your storage space or your patience.

While your camera’s running, it can be worth scouting around the vicinity for other compositions, but take time to stop and watch, too. There’s something magical about spotting meteors on nights like these. You can also use this time to experiment with adding some torchlight into the foreground to illuminate the scene.

Be prepared for the reality that as soon as you wrap up shooting, whether to re-compose or go home, you’re going to miss a spectacular shot. That’s just the way it goes.

Once you’re home, grab a brew to fuel your editing session and load your shots into your favourite image catalogue, rejecting any that don’t feature meteors but saving those which show any light painting you added. Streaks in the sky could be various things: meteors will look the most inconsistent and can be short or long, bright or faint, sometimes with coloured tails. Meteors don’t tend to have flashing lights (planes) or persist across two or more frames (satellites). 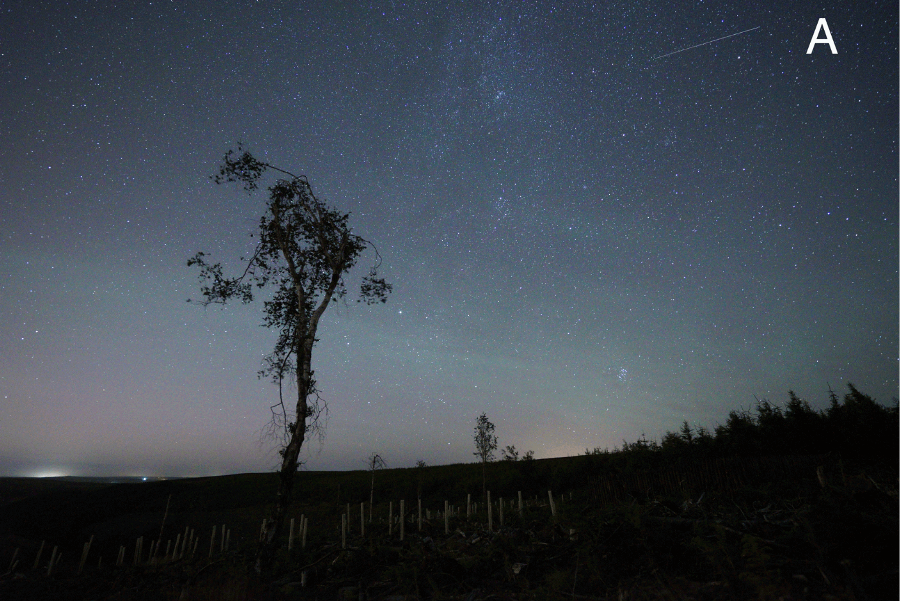 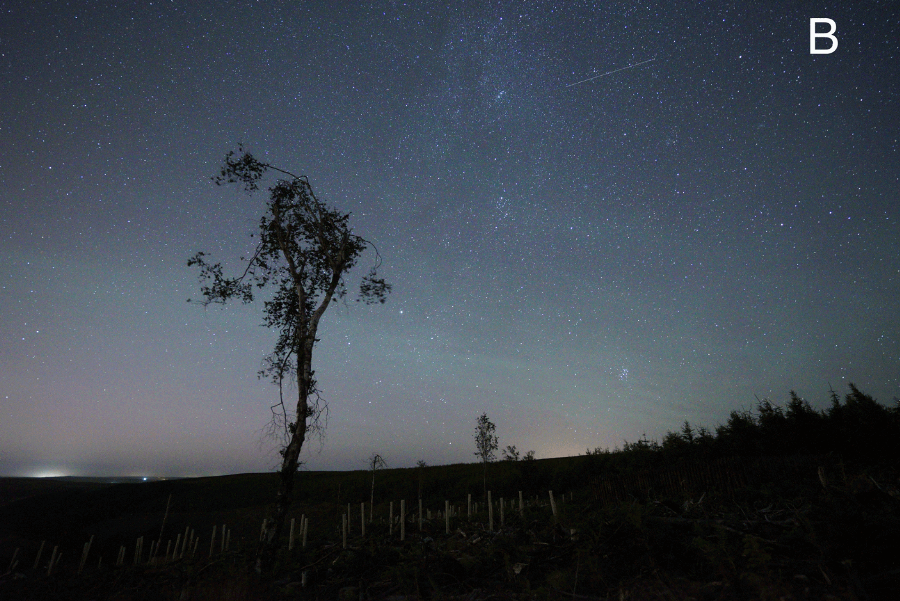 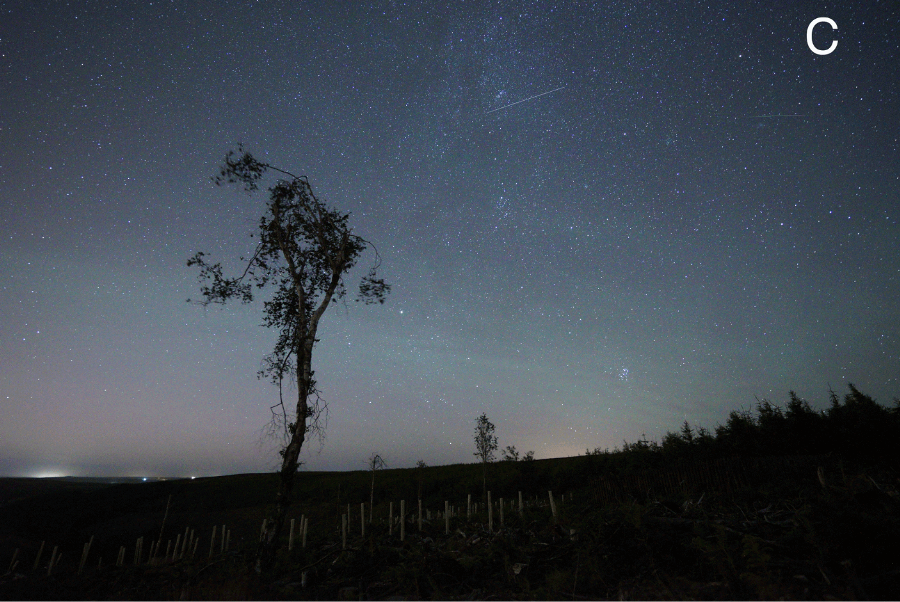 These three frames show the same satellite crossing the sky. Viewing each frame individually might make you believe you’d caught a meteor (there’s only one meteor – frame C)

From here there are countless post-processing options. A good starting point is to look for opportunities to layer and mask any illuminated foreground frames with just the meteors from your sequence of sky frames, to create a final image that tells the story of your time beneath the stars.

Andrew Whyte is a photographr specialising in long exposures and night images. See more at his website longexposures.com.

Why You Should Revisit Landscape Locations

How to Photograph Lightning