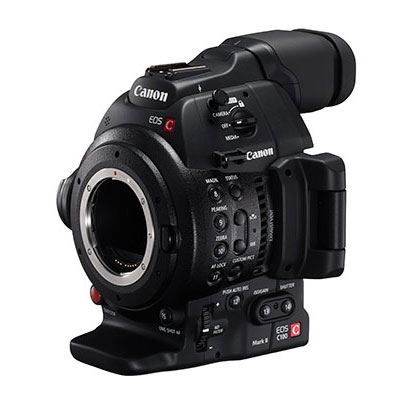 The Canon EOS C100 Mark II High Definition Camcorder builds upon its predecessor, the flagship Canon C100 which has become an industry-standard camera, and a favourite of film schools to teach new filmmakers cinematography. It features a Super 35mm format 8.3-megapixel CMOS imaging sensor alongside the DIGIC 4 Image Processor, and the Dual Pixel CMOS autofocus. The latter delivers consistent and ...

The Canon EOS C100 Mark II High Definition Camcorder builds upon its predecessor, the flagship Canon C100 which has become an industry-standard camera, and a favourite of film schools to teach new filmmakers cinematography. It features a Super 35mm format 8.3-megapixel CMOS imaging sensor alongside the DIGIC 4 Image Processor, and the Dual Pixel CMOS autofocus. The latter delivers consistent and smooth focus with improved image quality that remains at the top of its class even when working at high ISO speeds. To ensure elevated image quality, upgraded operability and convenient handling the C100 MK II comes equipped with improved RGB video processing, AVCHD and MP4 1920x1080/60p recording as well as uncompressed YCbCr output from HDMI. In addition to all of this, the incorporated EF lens mount gives filmmakers a wide choice of lenses allowing them to shoot for virtually any occasion. When combined with Cine Lenses cinematographers can create beautiful cinematic looks featuring shallow depth of field.

Similarly to the other cameras in the Canon Cinema EOS line-up, the C100 MK II also features an 8.3-megapixel Super 35mm Canon CMOS image sensor along with other powerful technologies which made the flagship C100 an industry standard. The sensor maximises the size of the individual photosite. These, in turn, deploy two photodiodes that ensure the delivery of high-speed removal of accumulated charge. This means that the effective sensor dynamic range is elevated. When combined with state-of-the-art Canon signal extraction, the ISO has been massively improved allowing for shooting in low-light scenarios with minimal noise and no loss of dynamic range quality.

The Canon DIGIC DV 4 Image Processor ensures higher quality image with true-to-life colour reproduction that features reduced moiré. If you would like to know the science behind this process then we invite you to keep on reading. The four video components (1920 x 1080 HD R Gr Gb B) found in the imaging sensor go through pre-processing before being sent to the DIGIC DV 4 processor for more advanced video processing. This entails the separate interpolation of the sparsely sampled R and B HD components forming a full-frame 4K for each. Additionally, the two green HD components are interpolated forming a singular full-frame 4K green component. This results in the three 4K RGB components being down-sampled to form a set of YCC 422 HD components with high MTF, low false colour moiré, elevated colour reproduction, and upgraded edge transition. Before these components are sent to the AVCHD and MP4 codecs they are further processed.

Record in AVCHD and MP4 Simultaneously

The operator can choose to record in both AVCHD and MP4 formats at the same time. These can be recorded in a variety of bit rates (up to 28Mbps and 35Mbps), frame rates (including 59.94p), and resolutions. Thanks to this, the camera is equipped to meet virtually any production needs. The AVCHD is considered a pro-standard format predominantly used for long-duration, Full-HD capture by utilising moderate total data capacities. MP4, on the other hand, is great for online video creation. Both of these formats are widely accepted by the majority of nonlinear editing applications. Additionally, AVCHD and MP4 files can be converted into smaller MP4 files ready for web upload. This works by converting the recording from the camera’s main SD card slot into a 3Mbps (640 x 360) MP4 file on the SD card placed in the second card slot. The resulting smaller file is much easier to transmit. Please note that MP4 conversion is not possible for AVCHD files at 28Mbps or MP4 files at 35Mbps.

The upgraded Organic Light-Emitting Diode (OLED) 3.5-inch 1.23-megapixel display delivers high-contrast, vivid colours, and considerably elevated responsiveness when compared to more traditional LCD screens. The OLED on the MK II covers 100% of the field of view in addition to providing wide and true-to-life colour range support. The viewing experience is exponentially improved even when working outdoors in bright sunshine. The brand-new hinge design aids the maximisation of monitoring versatility. The panel can be folded shut when not in use to protect the OLED surface. The user can open the tilt-able display at 180-degrees to access function keys and the joystick. Alternatively, the display can be further opened to 270-degrees to position it against the side of the C100 MK II. This allows directors, producers and other crew members to monitor the scene.

The Dual Pixel CMOS Autofocus facilitates powerful Phase Difference Detection that ensures the consistency of correct autofocus. This is true even in haphazardous situations making the C100 MK II ideal for news reportage and documentary filmmaking with the gun-and-run style of videography. The camera features a Face AF Mode capable of detecting and focusing on human faces. The Face AF combined with the fantastic Dual Pixel CMOS AF gives filmmakers the freedom to focus on composing their shots without hassle.

The built-in Canon Log LUT can be switched on/off in the camera’s menu. It can be used to protect the integrity of the total dynamic range. This facilitates greater creative freedom during colour grading. When monitoring an image during Canon Log-enabled capture remember that it is not an accurate representation of its final look. To counter this, apply the in-camera LUT (Look-Up-Table) that allows the image to be viewed live on an external monitor in Wide DR or BT.709 television standard colour space.

The C100 MK II comes fitted with a removable top handle featuring an integrated tally light, stereo microphone, dual XLR audio inputs for stereo recording, and a microphone mount. Audio can be captured in Dolby Digital or 16-bit 48 kHz linear PCM format. The handle also includes a compact collection of audio-level dials as well as channel/input switches. These are protected by a plastic cover for increased durability. The audio controls can be used to select signals from the built-in stereo microphone or from the XLR input attached microphones to independently adjust the gain on a channel-by-channel basis. The XLR inputs’ phantom power supply is also handy for powering a range of audio-capture devices.