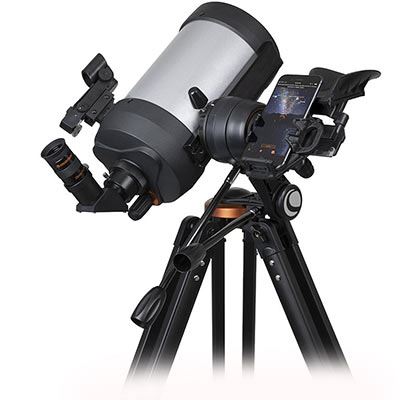 As the first telescope that utilises your smartphone for real-time night sky analysis and positioning, the Celestron StarSense Explorer is an exciting new prospect for those looking to take their first steps into stargazing. It works through the StarSense Explorer app, which auto-generates visible points of interest and directs you towards them. When the telescope has been manually aligned, the bullseye will turn green - allowing you to look through the eyepiece and More

As the first telescope that utilises your smartphone for real-time night sky analysis and positioning, the Celestron StarSense Explorer is an exciting new prospect for those looking to take their first steps into stargazing. It works through the StarSense Explorer app, which auto-generates visible points of interest and directs you towards them. When the telescope has been manually aligned, the bullseye will turn green - allowing you to look through the eyepiece and gaze at planets, brighter nebulae and galaxies, and even some star clusters. Classified as a Schmidt-Cassegrain telescope system, you are granted a 12cm (5") optical tube consisting of key StarBright XLT coatings. The manual altazimuth mount further provides smooth, dual-axis slow-mo control as you navigate the night sky and discover distant points of interest. This specific system is compatible with an iPhone 6 and up, as well as Android 7.1.2 or later (since 2016).

As this stargazing system is so simple, you don't need complicated star charts, imperfect planetarium apps, and confusing components to navigate the night sky. The StarSense Explorer is fast, efficient, and incredibly accurate. Simply place your phone on the StarSense dock and launch the StarSense Explorer app. After taking a minute or two to align your phone to the telescope's optics, the app will generate a comprehensive list of celestial objects that are currently visible. All you need to do is make your selection and follow the on-screen arrows as they dictate where the telescope needs to point for the best overall image. When ready, the bullseye will turn green and you can gaze through the eyepiece and begin your night sky discoveries.

If you live in a light-polluted city, there is no need to panic as the StarSense Explorer's advanced mechanics are still able to locate key points of interest. These include Jupiter, Saturn, Venus, the Orion Nebula, double stars, and some other world-famous celestial objects. When you are ready to view in a darker environment, the Andromeda Galaxy, Hercules Open Star Cluster, and so much more will become clear through the eyepiece.

StarSense Explorer utilises your smartphone alongside high-end technology to pinpoint the exact position of the telescope in relation to the night sky. Other astronomy apps may claim to do the same, however, these rely solely on your smartphone's internal gyros and accelerometers, which simply aren't as accurate.

The StarSense Explorer further incorporates a Lost in Space Algorithm (LISA), similar to the ones used by satellites in orbit to correctly orientate themselves. Essentially, this enables the app to match star patterns detected overhead with those within its internal database. This is truly groundbreaking for beginner astrologers and stargazers, with no other app on the market accurately expressing when your target is visible within the eyepiece.

Standing as Celestron's ‘go-to' optical design over the past 50 years, the 12cm (5") Schmidt-Cassegrain optical tube gathers an excellent amount of light to portray key details within the night sky. For example, you are presented with bright and sharp views of Jupiter's four Galilean moons, its cloud bands and Great Red Spot. Further to this, you can explore the rings of Saturn, the trapezium in the Orion Nebula, and the stunning Pleiades Open Star Cluster in great detail.

For such a consistent and reliable image, all air-to-glass surfaces have been coated with StarBright XLT optical coatings to improve contrast and overall light transmission. This allows for brighter views of deep space, the identification of subtle details within the moon and planet surfaces, and even faint galaxies and nebulae.

Why is the phone dock rotated 180-degrees when first removed from the box?

The phone dock has been rotated to ensure that the screws cannot damage the box in transit. All you need to do is rotate the phone dock's saddle 180-degrees by hand.

Is it an issue if the edges of the camera's field of view are slightly blackened?

As some more modern smartphones have such a wide field of view, they may not fit entirely within the StarSense dock's mirror. This does not effect overall performance of the telescope, as the camera can still see ample amounts of sky to determine its position.

Are you able to access the Object info page via the Planetarium View?

To access object info when in Planetarium View on the app, simply select the orange rectangle that displays the object name (i.e. ‘Saturn') - this will then show information specific to the object you are looking at.

Can you use the StarSense Explorer with a tablet?

A tablet such as an iPad is too large for the StarSense dock and is not compatible with this telescope system.