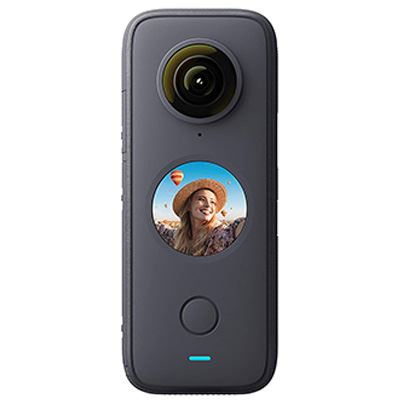 Read 2 reviews Write a review
Awaiting Stock
Check stock near you
This product is currently out of stock. Order today and we will place you on a waiting list fulfilled first-come, first-served when stock is received. No payment will be taken until the item is in stock and ready to be despatched. Full details »

The Insta360 ONE X2 is a pocketable, 360-deg action camera capable of four distinctive shooting modes: 360, Steady Cam, InstaPano, and MultiView. The camera offers 5.7K 360-deg capture for an all-direction recording eliminating the need to point while shooting. Either allow the ONE X2’s AI to pick the best angles for you or edit the footage yourself. The camera doesn’t only shoot in 360-deg. It ... More

1x Insta360 ONE X2 Sorry, there are no more available.

Continue Shopping Checkout
Please Login or Register to add to your Wish List.
Back to top
The Insta360 ONE X2 is a pocketable, 360-deg action camera capable of four distinctive shooting modes: 360, Steady Cam, InstaPano, and MultiView. The camera offers 5.7K 360-deg capture for an all-direction recording eliminating the need to point while shooting. Either allow the ONE X2’s AI to pick the best angles for you or edit the footage yourself. The camera doesn’t only shoot in 360-deg. It is extremely versatile, and is capable of filming traditional flat video with the Steady Cam mode. To top things off, the camera is waterproof, features a touch display, and delivers unbreakable FlowState stabilisation.

The ONE X2 is capable of 4 distinctive shooting styles, including 360, Steady Cam, InstaPano, and MultiView. Together they form an extremely portable multi-cam rig that doesn’t require a drone, a gimbal, or even an additional camera operator. It delivers 5.7K 360-degree capture, recording every angle from every direction, removing the need to point when shooting. Pick your ideal angle during editing or allow the AI to do it for you.

Do not fret, the camera doesn’t only capture 360-deg footage, it is also perfectly capable of recording traditional flat video with the Steady Cam mode. When working in this mode, the camera records with only one of its lenses, delivering exceptionally stable, ultra-wide footage. The resulting quality is instantly ready for social media and video platform sharing.

Multi-view is a great mode for solo vloggers and creators. It allows for the display of two angles at the same time. These can feature different fields of view and ensure that you are always in the frame thanks to the Insta360 app’s face tracking.

The ONE X2 is a content creator’s dream. It allows you to go live in 360 degrees on all live streaming websites, including Facebook and YouTube. Additionally, the ONE X2, can be used as a webcam with a wide-angle split-screen view compatible with Zoom and many other popular conferencing platforms. Stay connected with friends and family or step-up your conferencing presentations.

For panoramas, use the newly introduced InstaPano mode. It is incredibly easy to use – simply tap the option and the camera will do the rest for you without the need to move the camera across the scene which can often result in poorly-stitched and blurry panoramas.

The images captured with the ONE X2 boast natural colours and a high dynamic range. The latter is further enhanced by the PureShot mode when working in low-light, as it effectively reduces noise and preserves detail. The high-image-quality is retained even underwater thanks to the AquaVision function, which auto-balances colours without the need for additional filters or editing.

The unbreakable image stabilisation – whether you’re shooting in 360 or Steady Cam mode – is achieved thanks to FlowState, which keeps your footage impossibly smooth. With this latest release, both the stabilisation and horizon levelling algorithms perform better than ever before. You don’t need a gimbal to shoot ultra-stabilised footage with this pocket-sized camera.

The ONE X2 includes plenty of beloved favourites and new functions. You can now shoot for longer – up to 80 minutes to be precise – with the high-performance 1630mAh battery. Another great addition is the ultra-bright high-definition touchscreen that allows you to view your shots in 360-deg.

There are four mics built into the camera. They can hone in on your voice no matter how you hold the camera. Thanks to this, you can use voice control when shooting with the ONE X2, which comes especially handy when the camera is just out of reach. Free your hands by connecting AirPods to the camera to control it or to record audio while on-the-go. The microphones record stereo audio and utilise smart wind-reduction algorithm. Alternatively, record ambisonic audio to deliver a fully immersive experience to your viewers.

Another welcomed function is the TimeShift hyperlapse, which is available for 360 and Steady Cam recording. You can adjust the playback speed while reframing shots in any direction, or if you prefer, allow the AI to do it for you. Adding a Freeze Frame to slow the video down to a standstill and reframe any angle right in the middle of the action is also an easy task for the ONE X2.

The Insta360 app’s Shot Lap offers a continuously updated collection of handy templates that can be activated with just one-tap. Templates include Dolly Zoom and Stop Motion for simple cinematic effects, as well as Clone Trail and Shadow Clone, which can easily duplicate your body. Other creative templates, such as Ghost Town, can even remove people from your 360-deg timelapses.

AI functions can choose your best angle for you, or you can also pick your favourite angle manually. The Auto Frame analyses the 360 footage and reframes shots to find the best bits. Furthermore, the improved video recommendations, as well as the new photo algorithm, assist you in finding the best shot in mere seconds since combing through hours of 360-deg footage can get a little tricky.

Tracking is easy with the ONE X2 – simply select your subject with a voice command or with a tap. The upgraded Deep Track algorithm, which can be accessed via the app or studio, can track humans, animals, and any other moving objects while keeping it in the centre of the frame regardless of potential obstacles. 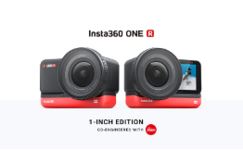 Read More about the Insta360 ONE R announced 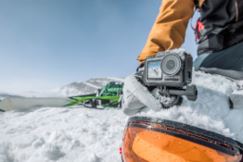 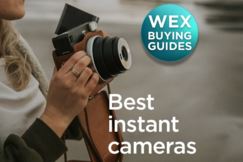 Read More about the Best instant Cameras in 2021