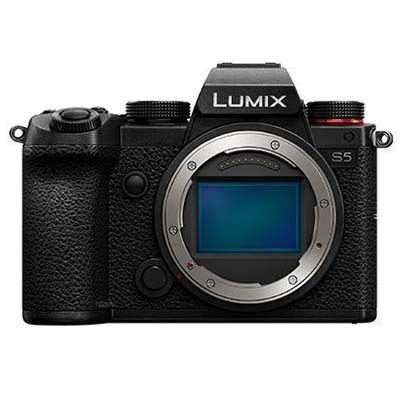 Read 64 reviews Write a review
In Stock
Check stock near you
This product is in stock and is available for immediate despatch.

Introducing Panasonic's Lumix S5 digital camera body. This full-frame hybrid mirrorless camera is designed to provide you with stunning video and stills performance, offering incredible versatility with impressive low-light performance and crystal clear images via its 24.2 megapixel CMOS sensor. The camera sees a newly developed and improved autofocus that's capable of precise focus acquisition and tracking. This is complemented by a power 5-axis image stabilisation and Dual Native ISO sensitivity that sees greatly reduced noise, even at the extended ISO level of 51200. Video plays a big part in this camera's makeup. It offers 4K 60p/50p 4:2:0 10-bit & 4K 30p/25p 4:2:2 10-bit internal, as well as 4K 60p/50p 4:2:2 10-bit HDMI output. This camera adopts Panasonic's cine camera precise and vibrant colour reproduction, achieved through 14+ stops of dynamic range with V-Log/V-Gamut compatibility and VariCam colour science. This camera is sure to impress at all levels, whether you're an enthusiast or professional.

Make sure to download the latest firmware. This firmware update includes:

We have to start with the S5's video capabilities. The LUMIX S5 is capable of 4K 60p/50p 4:2:0 10-bit, 4K 30p/25p 4:2:2 10-bit internal recording, as well as being capable of 4K 60p/50p 4:2:2 10-bit HDMI output. In addition, the 4K 30p/25p 4:2:0 8-bit internal recording has no time limitation - At all. This is thanks to Panasonic's optimised heat dispersion layout that utilises their technology to allow stable and continuous video recording. These video capabilities are complemented by the S5's 14+ stops of dynamic range with V-Log / V-Gamut compatibility with VariCam colour science.

The Panasonic S5 also can record HDR video in 4K. This feature is designed to give lifelike reproduction of both light and dark areas of an image i.e. without being over or underexposed. The video that is recording is produced with an optimised gamma curve that's compatible with ITU-R BT.2100. You can also use Hybrid Log-Gamma (HLG) in Photo Style which has a wider dynamic range that reproduces a more natural contrast between light and shadows. There's also a 6K Photo mode for continuous burst shooting which allows the capture of 30 fps. Once captured, a single frame the best timing from the 6K burst file is extracted and is saved as an 18-megapixel equivalent high-resolution photo. Finally, there's a Slow & Quick mode. This mode was developed to capture beautiful slow motion and quick motion. These are both available in 4K: 1-60fps, 30x quick to 2.5x slow, or in FHD: 1-180fps, 60x quick to 7.5x slow.

The S5 was designed for superior low-light performance. The camera was developed with a Dual Native ISO sensitivity, something that Panasonic first used in their cine camera VariCam line-up. Where single native ISO image sensors produce images that generally become noisier as the ISO sensitivity is increased, the use of a Dual Native ISO will minimise noise. This is achieved by the image sensor choosing an optimal circuit following the chosen sensitivity, before gain processing. By using this system Panasonic has been able to allow for a maximum ISO sensitivity of 51200 - The Dual Native ISOs are 640 and 4000. All of this allows you to have complete creative control even when optimal light levels diminish, allowing you to carry less lighting gear and generally save time on set.

The S5 has been equipped with a powerful image stabilisation system. Panasonic gave extra attention to this area of the camera, developing a system that uses an algorithm that accurately calculates shake information from not only the gyrosensor but the image sensor and accelerometer sensor, too. The configuration of this form of stabilisation allows for incredibly precise shake detection and compensation, allowing you to use 5-stops slower shutter speeds! When combined, the 5-axis in-body image stabilisation and the 2-axis optical image stabilisation of LUMIS S Series lenses, you'll see that the 5-axis Dual I.S.2 compensates for blur and in turn, allows you to use a 6.5-stop slower shutter speed. What does this all mean? What it means is that you're able to efficiently shoot in conditions otherwise unavailable to you e.g. confident shake-free telephoto lens use and/or low-light conditions and even one-handed shooting. Of course, this works with both photo and video work and that includes when shooting in 4K!

Panasonic's Lumix S5 has been kitted out with a redesigned autofocus system that shows improved precision and speed when used in both photography and video recording. The key was combining contrast AF with DFD (Depth from defocus) technology which in turn, allows the S5 to focus on a subject in a lightning-fast approx.0.08 seconds. As mentioned previously, the camera is made for low-light performance and with this, the S5 features a -6EV*2 luminance detection and impression low-light autofocus which is made possible due to the high sensitivity and tuning of the sensor. In addition to this, when a LUMIS S series lens is attached, there's a maximum communication speed between sensor and lens of 480fps. This incredible speed allows you to take advantage of the impressive AF performance.

The next addition to this autofocus system is advanced deep learning. This technology can more accurately detect specific subjects over other AF systems. It's designed to accurately detect people and fast-moving animals which includes cats, dogs and birds. Most interestingly, the person detection features the standard eye, face and body detection, but this system also separately detects heads with real-time detection technology. This additional detection heightens the accuracy of the camera's autofocus. More broadly, once detected, the camera will keep tracking the subject even if they move unpredictable e.g. turning around, moving their head or moving further away from the camera itself. Panasonic utilised improvements to DFD technology which provide enhanced AFC which means the S5 will consistently capture crisp and sharp images even of small and fast-moving subjects.

Whatever the task at hand, the compact and extremely mobile design of the LUMIX S5 can adapt to it. Heavy field use is supported by the tough magnesium alloy full die-cast built that is splash-and-dust resistant. Filming for prolonged times is also supported by the optimum layout designed to efficiently disperse heat. No need to worry about the camera running out of power during those long shoots either, as the battery can be recharged via the AC or USB. Furthermore, the camera features double SD memory card slots so that you also don't run out of memory space. One of the slots complies with UHS-I; whereas, the other complies with the high-speed high-capacity UHS-II. The LUMIX S5 offers great connectivity with smartphones and tablets - with minimum power consumption - thanks to the Bluetooth 4.2 GHz connectivity. This connectivity can also be utilised to copy and wirelessly transmit the setting of the S5 to other S5 cameras when working with a multi-camera setup. Additionally, the Wi-Fi 5-GHz connection ensures smooth remote control of the camera as well as high-speed data transfer.

Thanks to the large Live View Finder (LVF). The LVF offers a high magnification ratio of approx. 0.74x in addition to a high-speed OLED display with 2,360K-dot high resolution. Minimum time lag (0.005 seconds) high-speed response can be achieved via the pairing of the OLED with the LVF. If you're wearing glasses, the camera has an eyepoint of approx. 20mm which delivers high-visibility. Finally, the 3.0-inch free-angle LCD in 3:2 aspect, with 1,840K-dot high resolution, is great for touch control, and the REC Frame Indicator identifies whether the camera is recording or not so that you don't miss the perfect shot.