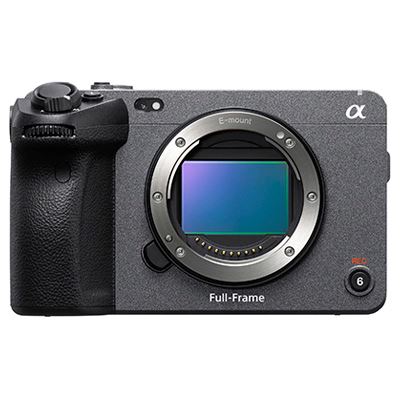 Read 13 reviews Write a review
Awaiting Stock
Check stock near you
This product is currently out of stock. Order today and we will place you on a waiting list fulfilled first-come, first-served when stock is received. No payment will be taken until the item is in stock and ready to be despatched. Full details »

Sony's FX3 Full-Frame Camcorder is their most compact cinema line camera yet. Smaller than other cameras in the series such as the FX6 or FX9, the FX3 is well-suited to handheld, gimbal and drone shooting; even more so thanks to the powerful 5-Axis In-body Image Stabilisation (IBIS). The camera is designed to help you never miss a shot with an advanced internal cooling system that allows you to significantly extend your shooting time. The FX3 will record exceptiona More

Sony's FX3 Full-Frame Camcorder is their most compact cinema line camera yet. Smaller than other cameras in the series such as the FX6 or FX9, the FX3 is well-suited to handheld, gimbal and drone shooting; even more so thanks to the powerful 5-Axis In-body Image Stabilisation (IBIS). The camera is designed to help you never miss a shot with an advanced internal cooling system that allows you to significantly extend your shooting time. The FX3 will record exceptional 4K full-frame quality video at up to 120p with minimal rolling shutter. Like its cinema line counterparts, it has outstanding low-light capabilities and 15+ stops of dynamic range thanks to its 10.2 MP Exmor R CMOS sensor and upgraded Bionz XR processor. This is complemented by a vastly improved AF performance and the inclusion of S-LOG3 and S-CINETONE picture profiles.

Please Note: This kit does not include a lens.

Every effort has been made to provide the highest-level and most accurate autofocus from a Sony cinema camera yet, which in turn will help you create compelling and professional-level films. The FX3 effortlessly tracks moving subjects with pin-sharp accuracy, and this is maintained even when using wide apertures meaning you can utilise the shallow depth of field control that the full-sensor brings. The FX3 also features advanced fast hybrid autofocus which combines phase-detection autofocus which results in fast, accurate subject tracking, with contrast autofocus which provides exceptional focus accuracy.

The FX3 is also equipped with highly advanced face detection that will find and lock onto your subjects allowing you to focus on framing your scene. In addition, like Sony's FX6, the FX3 features five-level autofocus subject shift sensitivity. This ranges from locked on, ignoring other moving subjects in the scene, to active response which will switch focus to different subjects which is ideal for sports where the focus needs to be shifted from one player to another.

You can take advantage of the FX3's 15+ stops of dynamic range which in turn, provides complete creative freedom for colour grading and post-production. This wide range, combined with reliable 4K 4:2:2 10-bit internal recording, allows you to focus on the framing of your scene knowing that every detail and nuance will be captured.

To meet the requirements of modern content creators, the FX3 enables cinematic expression with 16bit RAW, S-Log3 and S-Cinetone. The use of S-Cinetone provides a range of professional tones developed with the same expertise as Sony's world-leading VENICE digital cinematography camera. You'll capture rich midrange colours with a soft tonal look that invigorates facial tones. Another benefit of S-Cinetone is that your footage will exhibit these tonal and visual highlights straight-out-of-camera and thanks to the FX3's high-performance sensor, your vide will retain latitude in post-production.

With a similar build to Sony's A7S III, this camera is designed for versatile and flexible shooting. As you'd expect from most new and high-profile cameras, the FX3 features strong and stable 5-Axis in-body image stabilisation which will enhance any video recording that isn't shot whilst using a tripod or gimbal. This IBIS system is complemented by an overall compact and surprisingly small form factor which in turn makes this camera ideal for handheld, gimbal and even drone shooting, offering the flexibility and manoeuvrability to create dramatic, engaging films. Interestingly, the FX3 features no electronic viewfinder (EVF) which is an intentional design step to help reduce the size of the unit.

What's more, the FX3 is equipped with an advanced heat dissipation system which offers no overheating for hours of uninterrupted 4K 60p recording. Also, the camera features multiple thread holes across the body which allows you to attach accessories without a cage, adding to the compact nature of this cinema line camera.

This kit included the Sony XLR-K3M handle which is a dual-channel digital XLR audio adapter that allows you to connect microphones and other audio sources to cameras equipped with a Multi Interface Shoe. The adapter is able to produce an exceptional quality digital audio stream directly to the camera through the Multi Interface Shoe. This handle features two XLR-1/4" combo mic/line inputs with 48V phantom power, and a 3.5mm stereo input with plug-in power, all with individual level controls.

Why we love the Sony FX3:

We can't wait to test: