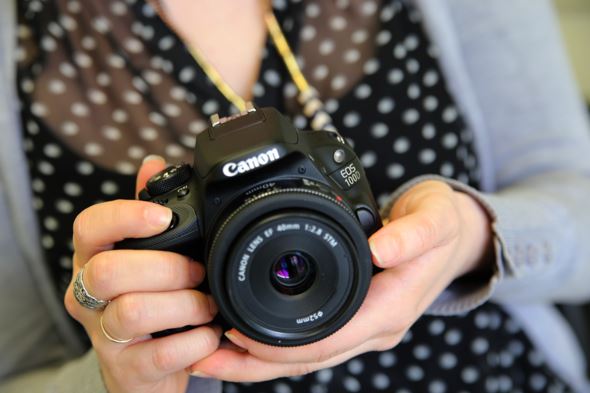 This morning Canon have launched not one, but two new EOS cameras: the 100D, which is the world’s smallest and lightest DSLR as well as the new entry-to-mid level range 700D. Canon have also announced a new 18-55mm STM kit lens, which will be available as a bundle with both the 100D and 700D.

I’ll be heading to Canon HQ this morning to get a hands-on preview of the new cameras, so keep an eye on the blog for more photos and updates later today. If you have any questions about the 100D or 700D, let me know in the comments below or send me a message via Twitter, Facebook or Google+ and I'll do my best to get them answered.

First up, let’s take a quick look at the world's smallest and lightest DSLR... Weighing in at just over 400g (with card & battery), the "world's smallest and lightest Digital SLR Camera" looks very small and very light indeed - in comparison, the Canon compact system EOS M camera is around 265g and the current entry-level DSLR in the range, the 1100D weighs in at about 495g. So, the 100D certainly looks like a DSLR that can go everywhere with you! It will be a great option for those looking to jump into Digital SLR photography but aren't so keen on the size and weight of some of the other entry-to-mid level offerings further up the range.

Despite its small stature, the 100D is still a decent looking camera on the inside. With an 18 megapixel CMOS APS-C sensor and DIGIC 5 processor, the image quality in this one should be just as excellent as what we've come to expect from the Canon EOS range. Here's a quick look at the specs... Technically a replacement for the 650D, the 700d comes into the range to sit above the 600D and below the 60D. In short, this new DSLR from Canon is another great offering at the entry-mid level end of the APS-C spectrum but is still packed with with lots of great features, making it a smart choice for beginners who want to get creative with their photography.

Here's a quick look at the key specs for this model... 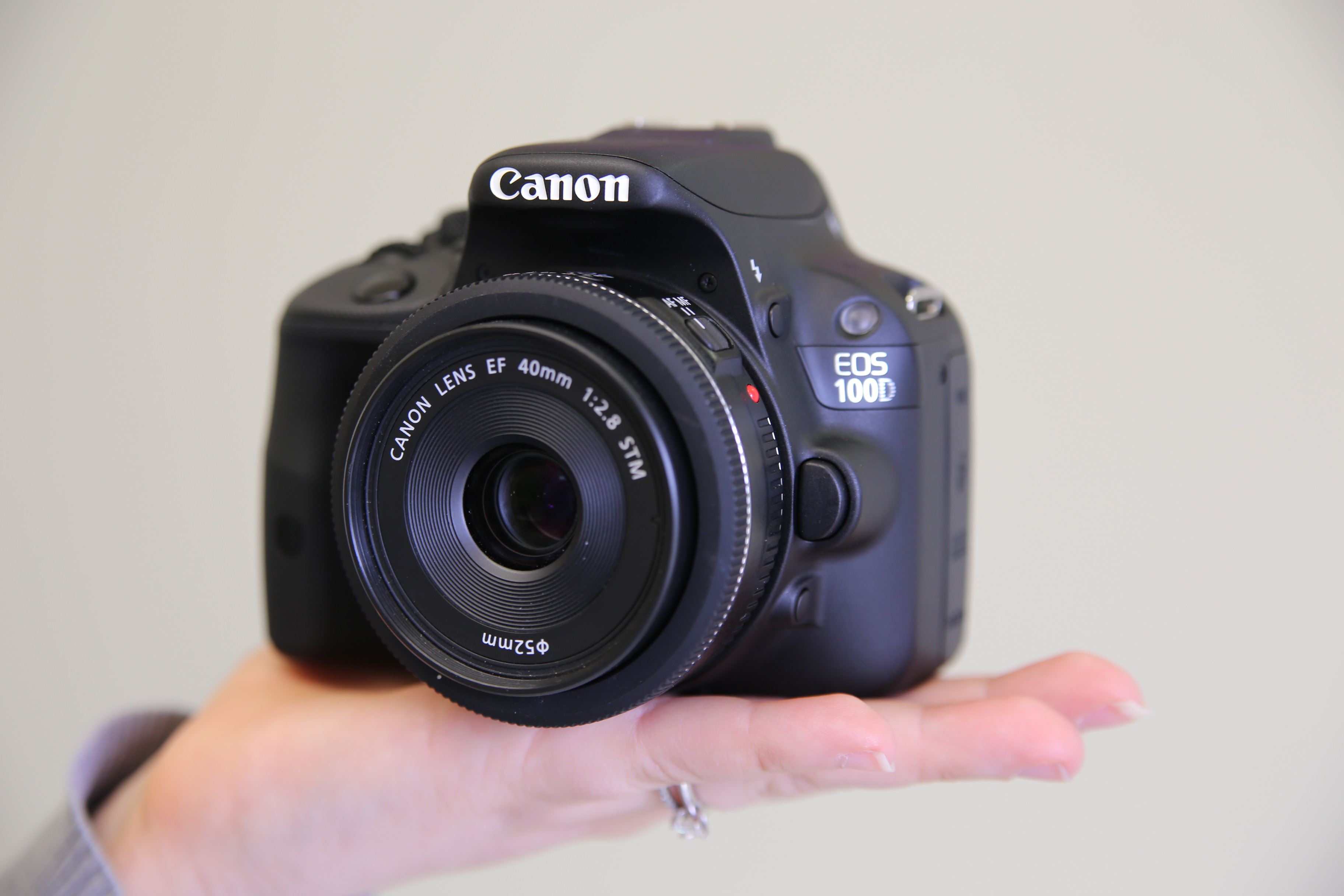 I've just come back from a morning spent at Canon HQ getting some hands-on time with the new 100D and 700D. First things first, the 100D really does look like the world’s smallest DSLR when you see it in person, it’s not just a title based on a technicality. It’s about 25% smaller than the 650D (and 700D). Canon have gone back to the drawing board with this one and the reason they've been able to make it so much smaller is that they've miniaturised many of the parts inside the camera – the shutter unit, metering optics, flash components and mirror box are just some of the elements that have all been redesigned to be teeny tiny. Even the sensor is smaller! Don’t panic, it’s still an APS-C with the same image capture area as on the 700D and other APS-C DSLRs, but the technology around it has been pared down and miniaturised. 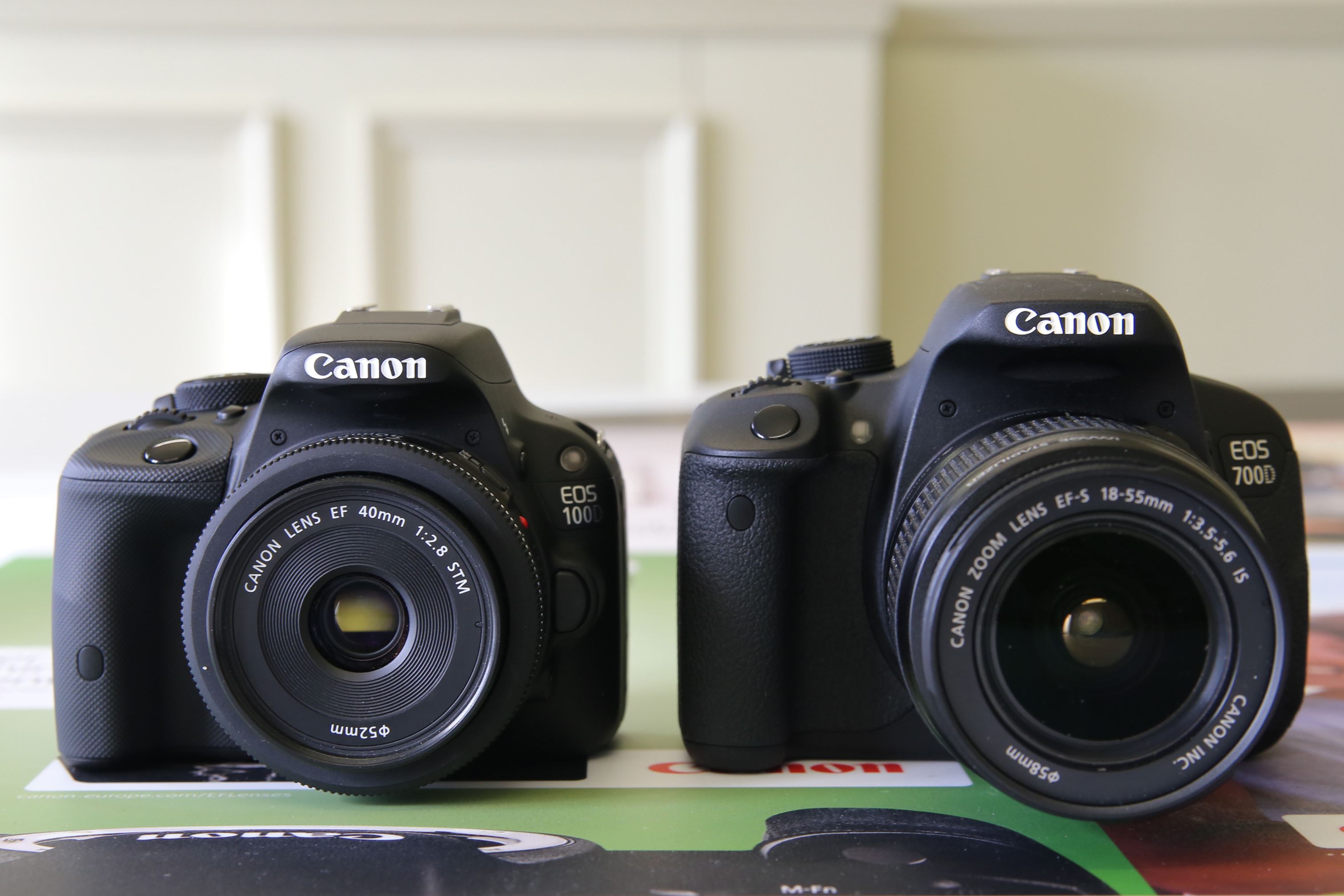 Most importantly, the image quality in the 100D is excellent and very similar (if not right on par) with what you'll get in the 700D. Canon has also introduced 3 new scene modes into this camera: Kids, Food & Candlelight – these will sit alongside the usual suspects Sports, Landscape & Portrait, but it gives it a bit of an update. The Kids mode is a great idea for Mum & Dad photographers, for whom the 100D could be a fantastic first foray into DSLR photography.

For those who are intrigued by creative filters - like miniature effect or black and white grains for example - there’s a sensible new feature in the 100D called Extra Effect, which saves two shots: one with the chosen creative filter and one without. It’s a feature we've seen in phone photography when shooting with filter-type apps for a while now, so it's great to see it on proper cameras too. I for one, would be more encouraged to experiment with these kinds of filters or use them just for fun, knowing that there'll still be a non-filtered version saved just in case. Another little extra for tilt-shift fans out there: you can now apply the miniature effect in movie mode on the 100D 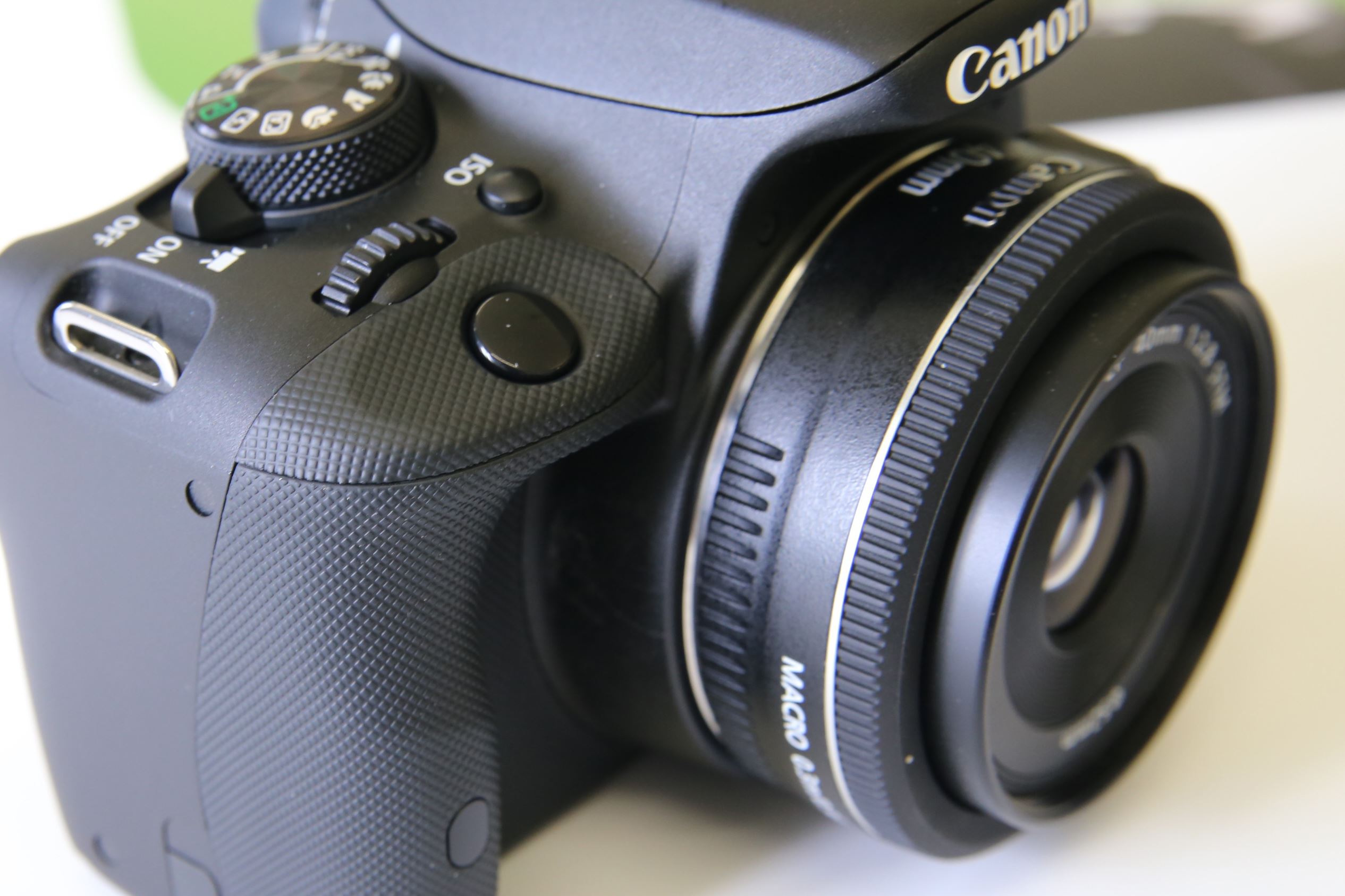 The new textured grip on the 100D is really nice and if you're into the small details I think you'll appreciate it. Personally, I quite like the look of it. With such a small camera, I'm anticipating feedback of it not being ideal for large-handed folk. If you can manage to shoot with a compact camera or bridge camera (which is pretty similar in size to this one actually), then don't be put off if you are looking for great DSLR quality images in a genuinely compact size. This nicely textured grip will help keep your hand firmly on the camera, while you're tweaking dials and navigating the buttons.

The 3” Clearview LCD on the 100D is brilliantly crisp and bright. The touchscreen functionality allows you to swipe through and pinch to zoom when reviewing images and quickly change key settings through the Q menu. Just like on the EOS M you can now touch to Autofocus when you’re shooting in live view. 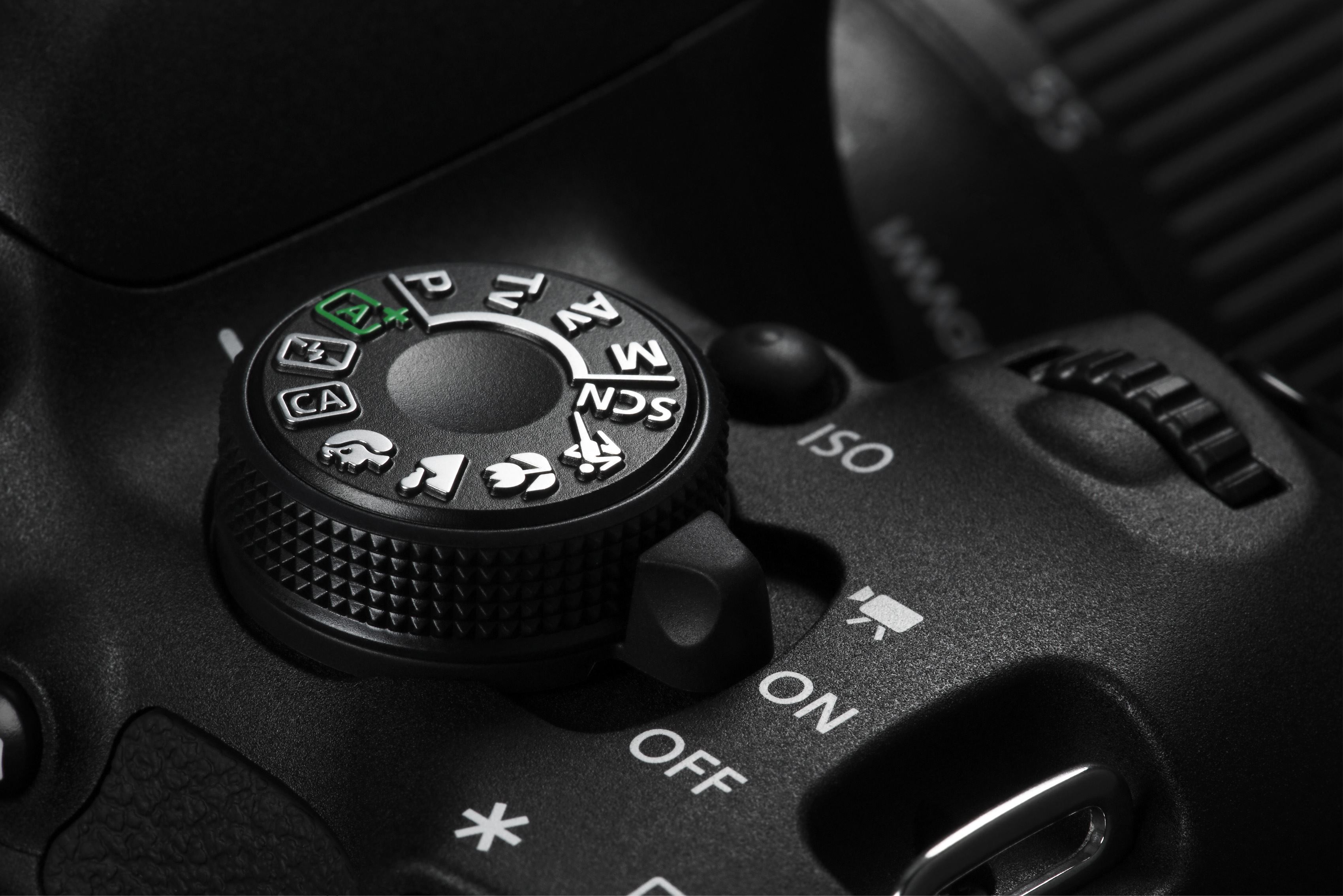 Looking at the 700D now, it’s a replacement for the popular 650D model and there are really no huge changes in terms of image quality between the two – so if you’re wondering what the 700D is capable of, look to the 650D to get a fair idea. The 700D has had a few adjustments though, making it feel a bit more of a ‘premium’ consumer DSLR, with an embossed mode dial (ooh!) that rotates continuously through 360 degrees (ahh!). Again, if you're a details person like me, this nice little touche won't go unnoticed.

The 700D boasts 9 AF points that are all cross-type and it can also shoot at up to 5 fps. Touching on to creative filters again, both the 100D & 700D allow you to preview the effects before capturing an image, although only the 100D will allow you to shoot with the Extra Effect feature that I mentioned earlier. 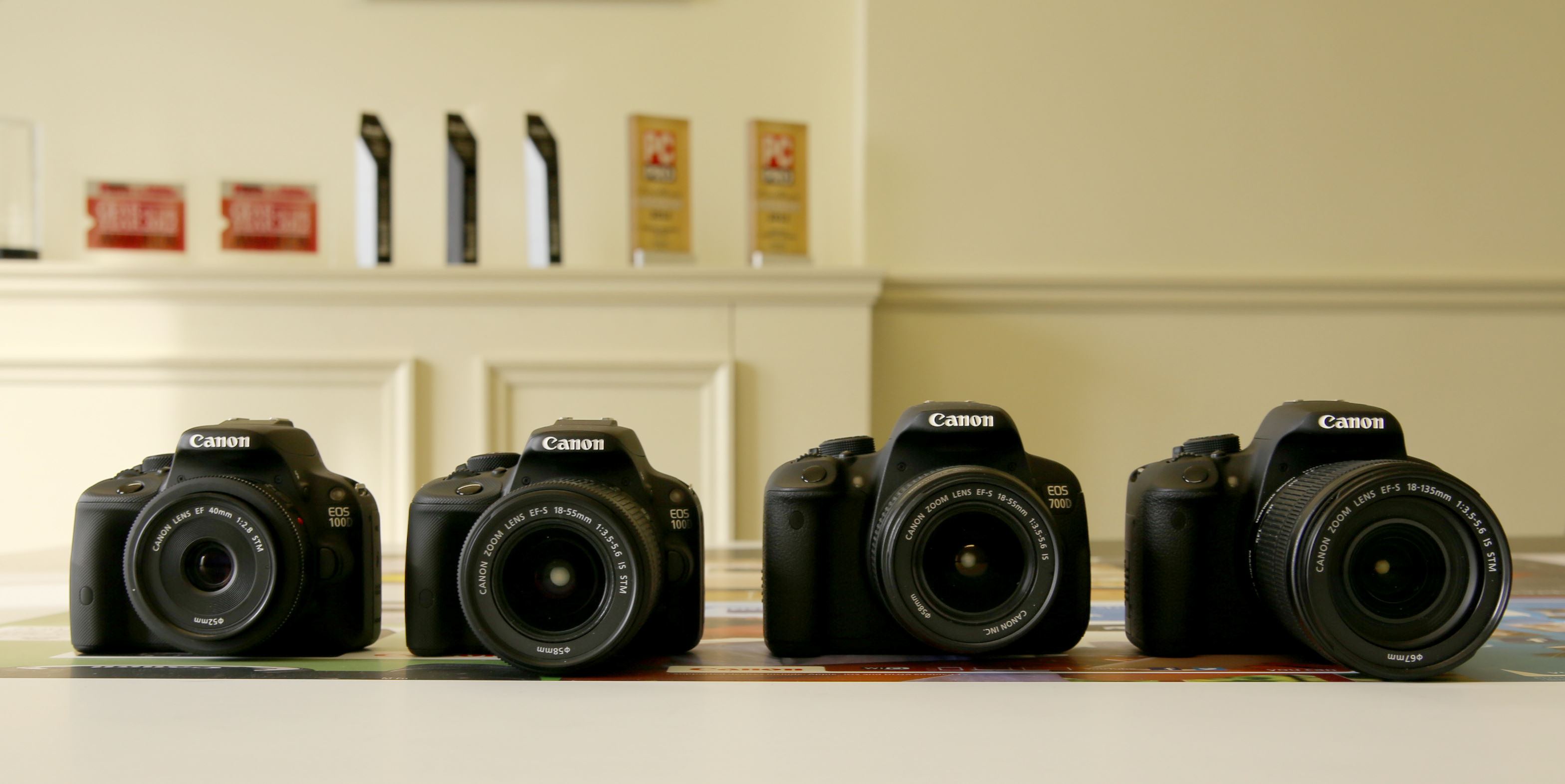 The 100D and 700D are two fantastic additions to the Canon consumer range of DSLRs. They both offer excellent image quality, even though they're aimed more towards those who might be buying their first Digital SLR. Although, I don't think it will just be beginners who will be taking a second look at these ones. The level of image quality offered by the 100D in such a lightweight, compact body may make this an ideal walkabout camera for those with something further up the EOS range.

Along with the EOS M (which is also up there with these two when it comes to IQ), there are some fantastic options for people keen on exploring creative photography. If you want something you'll never leave at home, the 100D will be perfect. If you're looking for the same great image quality but in a more sizable body than the 700D might be just the ticket.

Here's a nifty diagram showing the size comparison between the 700D, 100D and the EOS M... 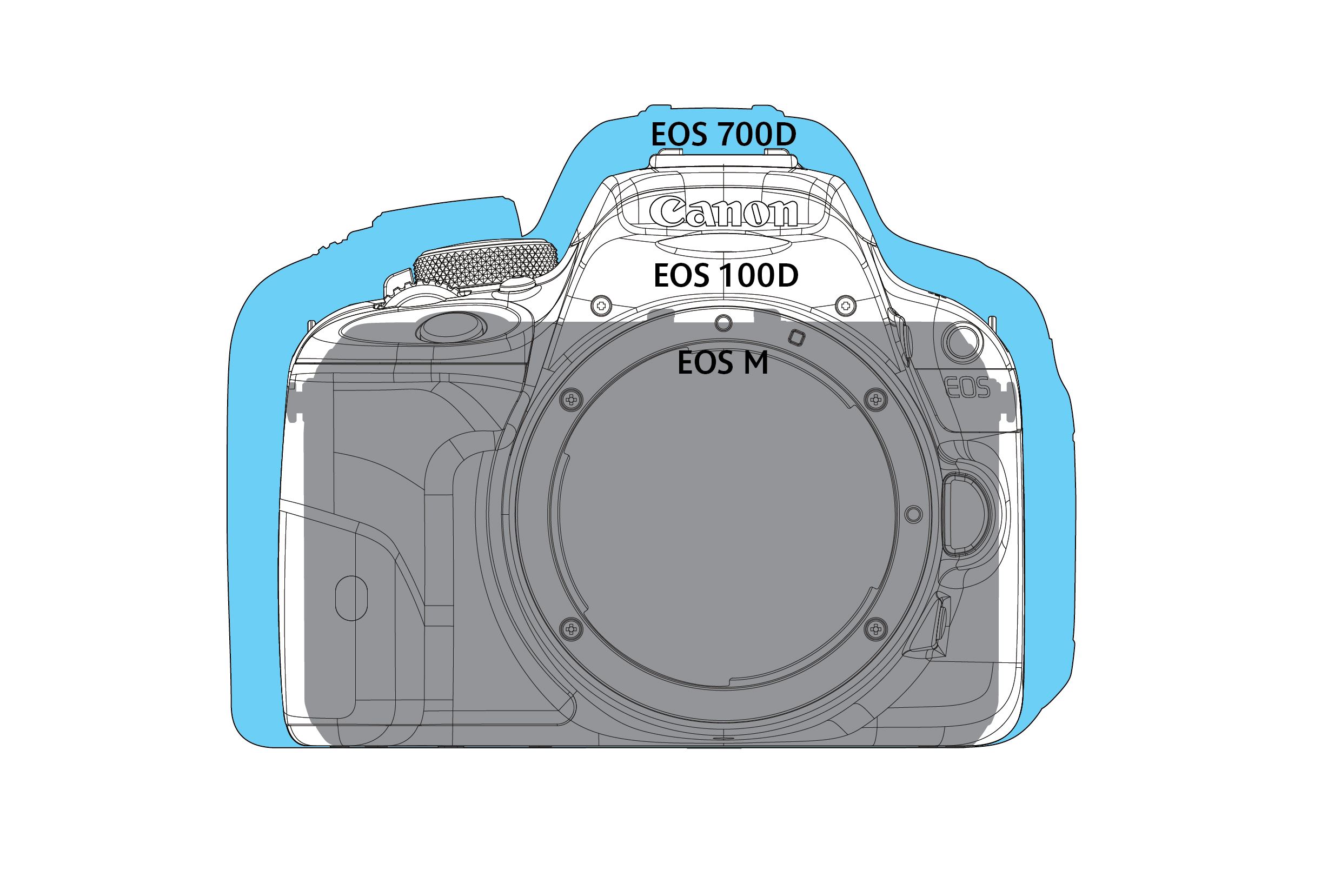