Sony continues to push the limits of camera technology with the announcement of two premium compact cameras. The first is the a6500, a mirrorless interchangeable lens camera with a 24.2-megapixel Exmor CMOS sensor and some impressive video capabilities.

Using the latest Sony Bionz X processor, the a6500 has a native ISO sensitivity range of ISO100-51200 and can be used to record 4K (full pixel readout) and HD video. But most impressively, the a6500 is capable of 1-120fps high-resolution video for shooting super hi-speed and slow-motion video. Advanced video users will appreciate that this camera also features Gamma Display Assist, zebra functionality and S-Log. 425 phase-detection AF points cover almost 100% of the camera’s sensor, combined with snappy contrast detection points to provide superb coverage when tracking subjects moving across the frame. And it’s positive to see that Sony has also include face and eye-tracking with AF-C for photos as well as video, which should make this camera ideal for shooting quality movies and keeping up with fast-moving subjects. Another thing that bolsters this camera’s speed credentials is its ability to shoot up to 11fps continuously with an approx 300 frame buffer in Hi+ mode (fine JPEG).

Sony has responded to feedback by adding touchscreen AF-point selection, which can even be used while shooting through the camera’s hi-res XGA OLED Tru-Finder. This is functionality that we’ve seen rival manufacturers supporting for quite some time now, so some may say it’s an overdue addition. Sony has also made this camera durable, constructing it from a magnesium alloy frame, with weather sealing for dust and moisture resistance. 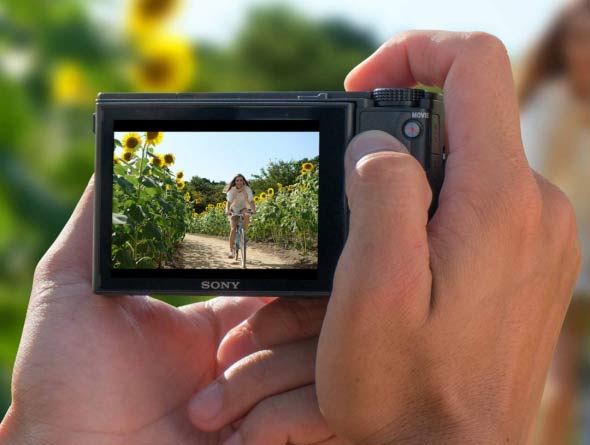 Sony’s popular premium compact line has also been updated with the introduction of the RX100 V, the fast and most powerful iteration of this camera to date. The RX100 V is the first of its line to feature Fast Hybrid AF, combining 315 phase-detection AF points and contrast detection autofocus. Utilising the power of the latest Bionz X processor, it can now capture 20MP stills at up to 24fps.

Other improvements see the introduction of 4K-video recording without pixel binning, meaning it is producing a 4K-video image from the sensor’s full readout, producing footage with greater depth and detail. The capable 24-70 f1.8-2.8 lens and pop-up OLED viewfinder, two of the RX100-series most popular features, remain unchanged in the new RX100 V, along with the premium compact build quality.

We are awaiting further details on both cameras, including pricing, but have a look at the video below for an example of the RX100 V slow-motion video capabilities. It’s impressive.