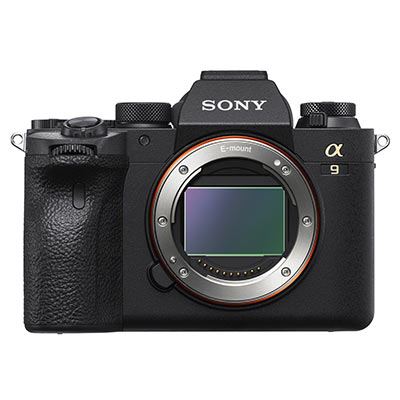 Read 54 reviews Write a review
In Stock
Check stock near you
This product is in stock and is available for immediate despatch.

The Sony A9 Mark II is the successor to the widely popular and well-received Sony A9. It is a Full-Frame Mirrorless-System camera offering 35mm Full-Frame stacked 24.2 MP Exmor RS CMOS sensor, and built-in 1000BASE-T Ethernet terminal. All of this has been packed into an extremely compact, stylish, and portable body. The A9II is undoubtedly a marvel of digital camera technology and a worthy addition to the Sony Alpha Mirrorless-System camera line-up. More

1x Sony A9 II Digital Camera Body Sorry, there are no more available.

The Sony A9 Mark II is the successor to the widely popular and well-received Sony A9. It is a Full-Frame Mirrorless-System camera offering 35mm Full-Frame stacked 24.2 MP Exmor RS CMOS sensor, and built-in 1000BASE-T Ethernet terminal. All of this has been packed into an extremely compact, stylish, and portable body. The A9II is undoubtedly a marvel of digital camera technology and a worthy addition to the Sony Alpha Mirrorless-System camera line-up.

The MK II of the A9 delivers outstanding connectivity that is, above all, safe and private. The built-in 1000BASE-T Ethernet terminal supports gigabit communication for high-speed and stable data transfer. Data security has also been increased thanks to the SSL or TLS encryption that also facilitates tethered shooting. The release time lag has been minimised and so has been the live view screen delay if the user is making the best of the Remote Camera Tool app for desktop. Finally, the built-in wireless LAN has been exponentially accelerated with the generous 5GHz.

News agencies can depend on the high speeds provided by the Sony A9II. Improved for operability, it offers a brand new Voice Memo function. It allows the operator to make verbal notes that are attached to images that are replayed when the images are viewed. The voice memos can also be transferred to editors for a much faster post-production workflow. Important news coverage can be done in a much more convenient and reliable manner. The voice memos can also be turned into metadata for documentation purposes. Remarkably this can be achieved manually or automatically. Through the amalgamation of wireless voice/image transfer with the automatic voice to text conversion the ability to auto transfer images that carry attached voice memos via the FTP the user is able to capture and transfer to an FTP server without depending on a smart-device, cutting down on the precious workflow time.

Out of this world Fast Hybrid Auto Focus delivers fast and accurate performance that tracks fast moving subjects. The 693 focal-plane phase-detection AF points provide coverage of over 93% of the image area in addition to 425 AF points. Other notable features that are sure to satisfy the needs of some of the most demanding personalities include Real-Time Eye AF for animals (featuring a new algorithm), Real-Time Eye AF with right eye/left eye selection, Real-Time Eye AF for video, tracking as well as selectable frame colour and much, much more! The AF is capable of continuous tracking even if the respected shooting is greater than F16 for an even greater accuracy for shots that need slower shutter speeds.

The Sony A9II features an upgraded BIONZ X image processing engine that is utilised to the max thanks to the incredible readout speeds the sensor offers. The processor uses a front-end LSI to enable the fast and accurate AF/AE detection, face detection. The shutter mechanism has been updated and redesigned so that it can suppress the slight movement that can ultimately cause blur in your images. Then there is the sturdy and reliable 5-axis optical in-body image stabilisation - this stabilisation offers a shutter speed advantage of whole 5.5 steps.

Sony has gone all out with the redesign on this Alpha iteration. Let's begin with the ergonomics - Here we go: So, they have made a general improvement to the button design and feel across the camera. An example of this is the increased diameter and feedback on the AF-ON button; something that was often mentioned when using the original A9. Sony has updated the multi-selector joystick design and redesigned the shape and position of the rear dial, as well as including an exposure compensation dial lock button. Finally, Sony has improved the ergonomics of the grip for more added comfort. This new body is also compatible with the Sony VG-C4EM Vertical Grip.

Interface and Other Bits

To accompany the stunning video recording, digital audio interface has been incorporated into the Multi Interface Shoe. This allows for the ECM-B1M Shotgun Microphone or an alternative to be connected right into the camera. This means cleaner audio recording for pro video. The dual media slots ensure continuous shooting and support UHS-I as well as UHS-II SD cards. There is also a USB Type-C connector which allows for fast USB 3.2 Gen 1 data transfer.

Feel free to take a look at the rest of Wex Photo Video's Sony Mirrorless Cameras. We also stock a large range of alternative Compact System and Mirrorless Cameras. With over 20,000+ products there is something for everyone from a novice photographer, amateur filmmaker to a seasoned professional.

{{item.DisplayName}} for the Sony A9 II Digital Camera Body