Gear of the Year! And the winner is...

Readers of Practical Photography and Digital Photo magazines, and browsers of the Photo Answers website may well be aware that every year for the past 25 years they have run the Gear Of The Year awards - a way of acknowledging and celebrating the new and exciting developments in the world of photography over the year, along with the people and organisations that have made it special. 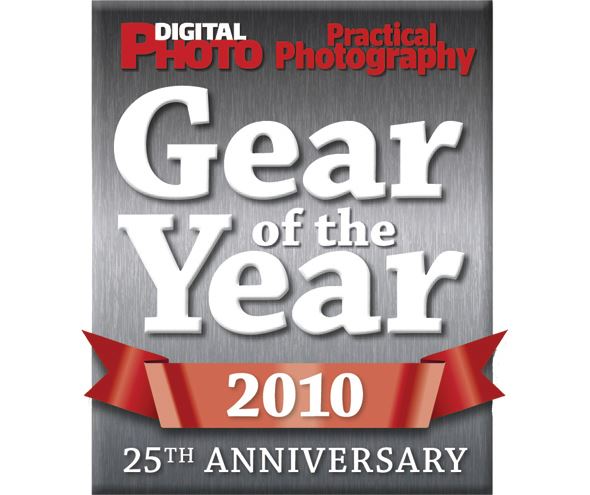 The product awards are decided by a panel of judges, including members of the Practical Photography and Digital Photo editorial teams and representatives from photographic retailers, and I have been privileged to sit on this panel for the past 3 years (2010 included). However, the three retailer awards of "Best Online Retailer", "Best Specialist Retailer" (less than 12 stores) and "Best Retailer" (any number of stores) are voted for by a collection of far more important people - the customers, with readers of the magazines and the website having cast their votes over the past few months for their favourite retailers, along with the "Best Processing Service".

For the past 8 years Wex Photographic have won the coveted "Best Online Retailer" award and, with this being the extra-special 25th Anniversary of the awards, we were hoping to make it 9 in a row. However, this year things were slightly different - not only were we nominated in the "Best Online Retailer" category, but thanks to our superb showroom and improvements made to Wex Photographic over the past year or so, 2010 also saw us nominated in the "Best Specialist Retailer" section. The results of the vote and the judging would not be known until the awards ceremony itself, which took place on Thursday 9th September.

Sadly, I have something of a reputation at these awards, having managed to lose my mobile phone, my glasses, and my memory of most of the evening on the first ever awards I went to. Needless to say, subsequent years have remained a far more sedate affair for me, but I will always be "Ben from Wex Photographic who lost his glasses on a rickshaw" to many of the people I met.

This year, however, was perhaps the most formal event I have attended. It was held in Browns Courtrooms in Covent Garden - a particularly impressive setting which, as the name suggests, used to be a courtroom. It should be noted that many of the attending guests looked far more at home in a courtroom than others, particularly, it must be said, the editorial staff of Practical Photography and Digital Photo.

The sophisticated surroundings of Browns Courtroom 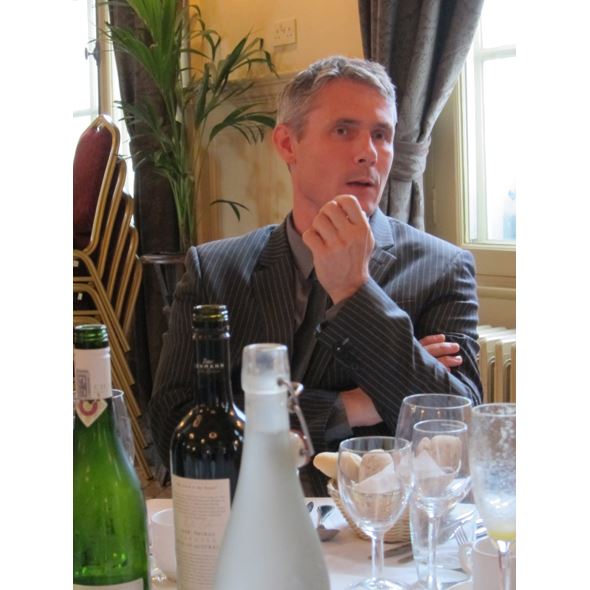 PP's Andrew 'The Silver Fox' James sizes up the table-to-stage range before confiscating the bread rolls.

So, after welcome drinks, some mingling, and a 3 course lunch featuring the nicest mushroom soup I have ever tasted (with, I suspect, enough cream in it to harden arteries from 20 paces) it was time for coffee and the start of proceedings.

Compères for the awards were Digital Photo Editor John Adams and Practical Photography's Editor-in-Chief Andrew James. The two of them make a rather good double act as presenters - much Like Ant and Dec, but far more likeable. And as anyone who attended last year's awards will tell you, the pair make an impressive Irish dancing duo.

There was no dancing this year - a combination of the presentation being given from the confines of the judges bench (no room for dancing, and not in keeping with the austere setting) and John having broken the stage last year with a particularly enthusiastic stomp (and he's only a small fella!). That said, the presentation of the awards was still interspersed by moments of jocularity, occasionally at the expense of a member of the audience (yes, including me), but more often than not Andrew and John were content pointing the finger of fun at themselves, or, more accurately, each other. 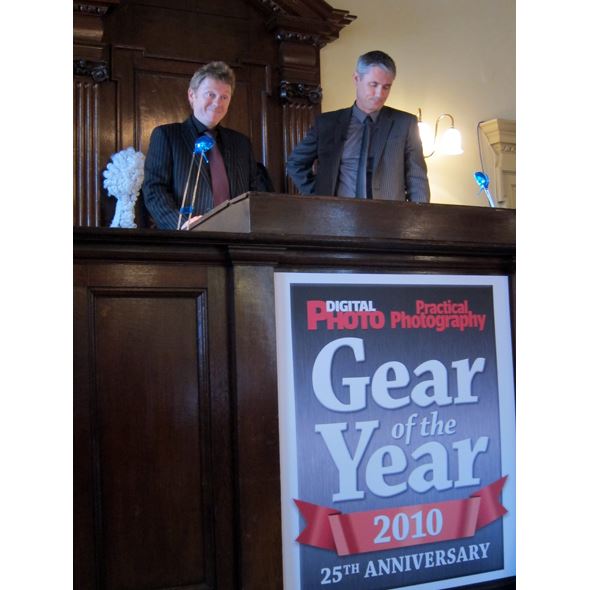 Despite much anticipation, the judge's wig never made in onto the head of either of them.

However, the comedic highlight of the day came from Andrew James during lunch. At around 14:30 one of our table-mates remarked that she had to attend a dentist's appointment later that day.

"Have you just remembered that because it's TWO-THIRTY?!

Have you reached a verdict?

After the majority of the product awards (see here for the results) it was time for the much anticipated (by us anyway) Retailer Awards. First up was the "Best Online Retailer" award - ours for the past 8 years.

"And the winner is.....Wex Photographic!"

Back of the net! Our E-Commerce Director Tim Woollias stepped up to collect the award, a bottle of bubbly, and have his photo taken by Digital Photo's Technical Editor Phil Hall. 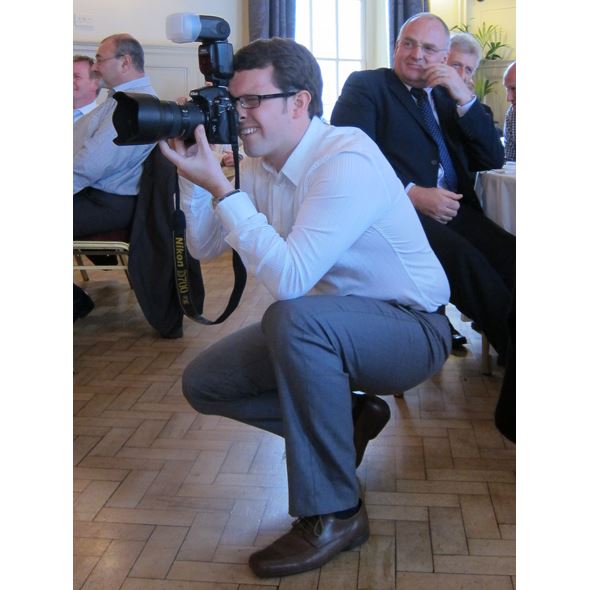 "And the award goes to.....Wex Photographic!"

Now, I can't speak for my colleagues Tim and Angie, but at this point it took all my control to stop myself leaping up and sprinting round the courtroom in a celebratory lap of honour with my fists in the air singing "2-1, 2-1, 2-1, 2-1" at the top of my voice. That would have been impolite.

However, the smile of delight on my face was impossible to hide as our Marketing Manager Angie Pickavance stepped up to collect our second award, our second bottle of bubbly, and pose for more photos. 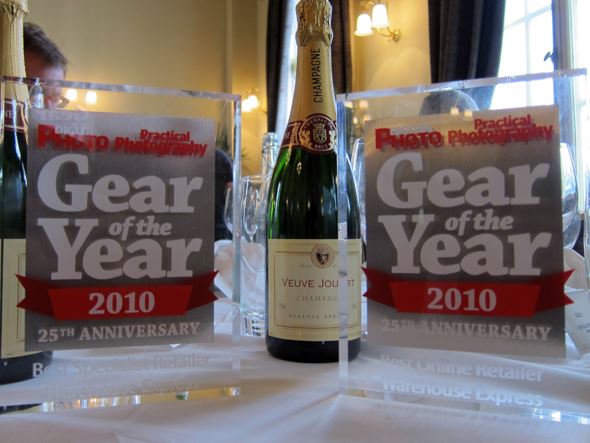 After the final awards had been announced, it was time to finish up the remaining glasses of wine and head downstairs to Browns Bar to, well, to get more glasses of wine. As is always the case with the Gear of the Year awards, it's nice to catch up with other retailers and manufacturers and have a chat about all things photographic and, to be entirely honest, a wee drink helps grease the wheels of conversation. 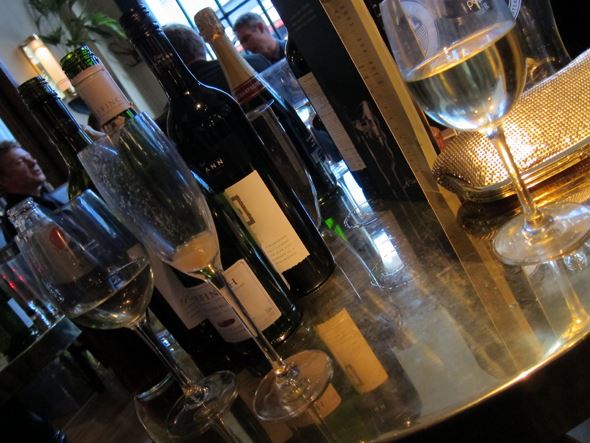 I hasten to point out, these aren't all mine.

After a long and pleasant afternoon, capped off by a particularly nice Chinese meal in China Town, it was time to head back home. In the interests of keeping things fair (and ensuring we didn't lose the awards in the back of a taxi, as our Sales Director Stewart Fielder did a few years back), Tim headed home early with the trophies, and Angie and I were left to shepherd the bottles of bubbly home.

The Awards will soon be on display in our Norwich showroom, and we hope to add yet more awards to them over the forthcoming years. Personally, I look forward to attending more Gear of the Year awards in the future, wherever they may be held. 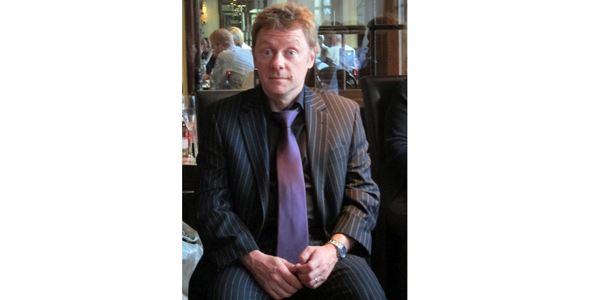 John 'Thunder Hoof' Adams suddenly has flashbacks to his last time in court.