Panasonic has broadened its acclaimed Lumix G-series of Compact System Cameras by introducing the Lumix GM1 - the debut model in a new ‘GM’ series. 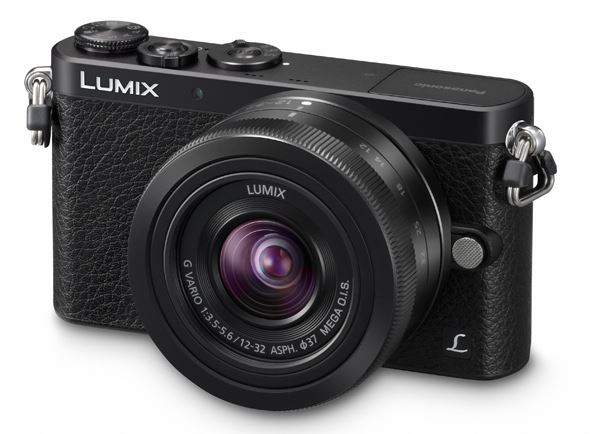 Panasonic has stated that the Lumix GM1 is aimed at the enthusiast user and is not a replacement for any of its existing models. It’s also the smallest G-series camera to date although it continues to use the same Micro Four Thirds mount as previous Panasonic CSCs.

The Lumix GM1 arrives with much the same functionality as the recently announced Lumix GX7, which includes the 16MP LiveMOS sensor which was newly developed for that model.

The camera will also mirror the GX7 by including Wi-fi, which, among other things, allows the camera to be programmed remotely via smartphone or tablet, although it will not feature Near Field Communication (NFC) technology.

Thanks to a newly-developed shutter unit, which is said to be much smaller than those used in previous models, the camera can be programmed to fire at a maximum shutter speed of 1/16,000sec – a full EV stop faster than the GX7. 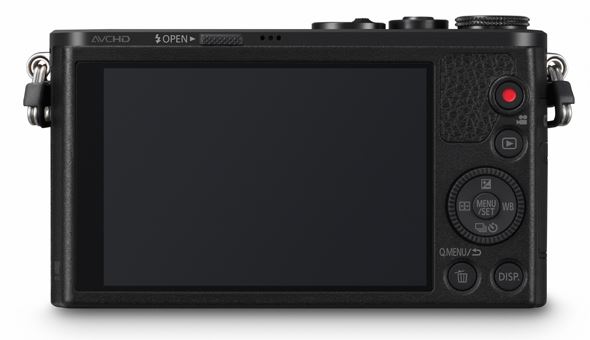 With regards to burst shooting, the Lumix GM1 is capable of maintaining a continuous burst rate of 5fps, which drops to 4fps when AF tracking is enabled.

The Panasonic GM1’s Light-Speed AF focusing system is said to be as fast as 0.06sec with selected lenses, with a communication rate of 240fps between the camera body and lens. Those choosing to use manual focusing, meanwhile, will be pleased to learn of the inclusion of focus peaking to assist in accuracy.

The Lumix GM1 will launch with a new kit optic which has been specifically designed to complement the model. The 12-32mm f/3.5-5.6 Asph. MEGA O.I.S. provides an effective focal range of 24-64mm (in 35mm-equivalent terms) and has been constructed around the same retractable design which has grown popular in recent years. This shortens its length while not in use by retracting the optic inside the barrel.

The lens features eight elements arranged over seven groups, and these include three aspherical and one extra-low dispersion (ED) elements. The optic has also been furnished with a new actuator and an internal focusing system.

Despite being significantly smaller than previous models, the GM1 boasts a 3in In-Cell touchscreen LCD which features a resolution of 1,037k-dot resolution. This is the same as on the GX7, and is said to lack an air gap between the display and rear panel for better visibility.

The new camera arrives alongside a new grip, the HGR1. This screws into the bottom of the camera via its tripod mount and helps with handling.

The new Panasonic GM1 will be available for pre-order later today - in the meantime read our hands-on preview below to see what we think.

So just how small is the new Lumix GM1? Well, it fits nicely into the palm of my average-sized hands, with the lens only protruding around an inch or so from the lens mount. It's roughly the same size as Sony's RX100 II or Pentax's Q7, although it boasts a considerably larger sensor than either of these which should add to its appeal.

It’s great to see Panasonic paying so much attention to the camera’s build quality, which, at the cheaper end of the CSC market, is an area where compromises are often made. Panasonic has constructed the camera with an aluminium die cast frame, around which sits a magnesium alloy body, with a solid metal lens mount. In the hand it feels sturdy and well made, without any obvious signs of cutting corners. 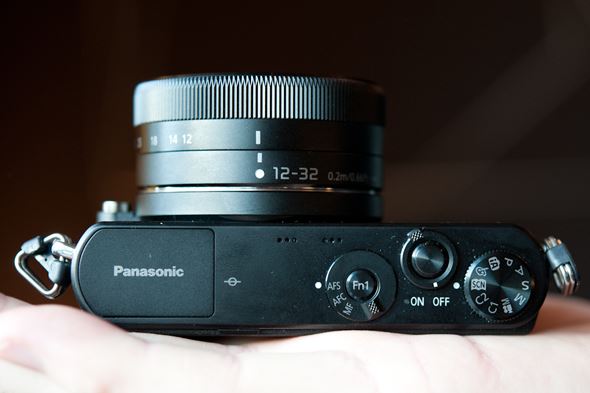 Around the front plate Panasonic has finished the camera with a smart leather-like material to aid handling, and this continues around the back in the form of a small thumb rest. Despite its small size it fits nicely in the hand, and at just over 200g (with its battery and memory card in place) it also has a reassuring weight to it. You certainly wouldn’t want it to be any lighter, particularly if you plan on using it with longer telephoto lenses where weight aids stability.

One common issue with small cameras such as the Lumix GM1 is the position of its strap lugs, and more specifically, how this affects handling. It’s pleasing, therefore, to find the lug on the grip side of the camera not presenting this issue, with the shooting hand naturally curling itself around it rather than it being in the way.

The new 12-32mm lens lens also sports a pleasingly streamlined design, with its solid build complementing the camera and the deep ridges towards its front allowing you to get a decent grip. It’s also nice to find the lens is ended with metal rather than plastic, something also true of the mount on the camera's body. On the sample we handled it also wasn’t particularly easy to overshoot the wideangle end which ‘locks’ the lens too; this can be an issue with such retractable lenses.

The top plate conceals a flash on one side and two dials on the others, one being the mode dial and one for changing focusing modes. There isn’t a hotshoe for external flashguns, GPS units or other accessories, although this perhaps isn’t as great an issue here as on other models such as the Lumix GX7.

As with the Panasonic GX7, both the memory card and battery are accessed from the bottom of the camera. This shouldn’t cause any problems in itself, although those intending to use the camera mainly for tripod-based work may prefer the door to access this compartment be located around the side of the body instead.

The new HG1R grip which has been designed specifically for the new model is only a few millimeres deep, but it feels just as solid as the GM1. It attaches quickly and simply, and makes a positive difference to handling, which makes it ideal for those with larger hands.

Panasonic has been one of the main proponents of touchscreen LCDs on its CSCs, and the GM1 boasts one which responds very well to the touch. This can be used simply to focus on the subject or alternatively to focus and release the shutter in one motion. As we may expect, the camera can also have much of its functionality chosen in this way, from options in the main menu to the small icons designed specifically for touch-operation.

Given that the screen is the same as that on the Lumix GX7, it comes as no surprise that it appears just as competent in use. It reacts well to changes in scene brightness while its viewing angle also appears to be wide (at least under the balanced indoor conditions in which we used it).

The camera's focus peaking function also worked well to overlay the scene with bright highlights (whose colour can be changed according to the subject), making it easy to see subjects coming into focus. We particularly liked the Pinpoint AF function too, which magnifies the point of focus to confirm the camera has the subject in focus. 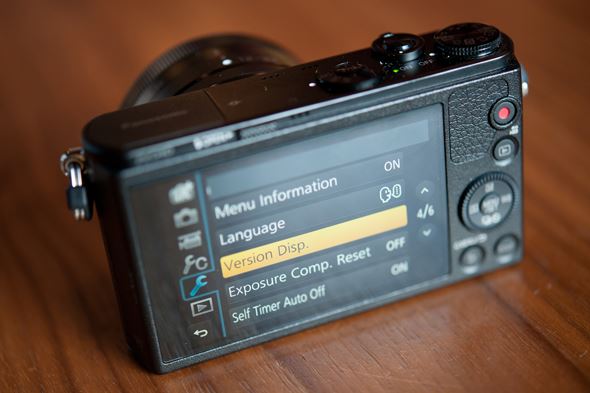