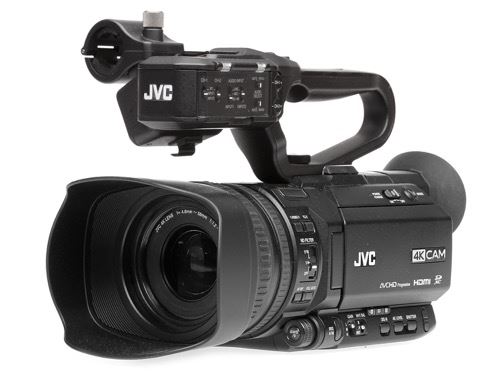 The GY-HM250E succeeds the GY-HM200E and boasts a number of on-board graphical overlays for both recorded and streamed footage, eliminating the need for an external CG or production switcher. Lower-third overlays — ideal for sports footage — can be generated and controlled using a smartphone or tablet. Custom logos or icons can be uploaded via included software, for use in the lower-third of a video. Full-screen graphics can be cycled through manually or pre-set to run as a slideshow. The video camera has provision for up to 50 JPG or PNG graphics.

The successor to the GY-HM200SP, the GY-HM250SP, provides score overlays for a variety of sports including football and basketball, which can occupy various positions within the frame. Sports scores can be updated using a smartphone or tablet and real-time scoring can be updated when using an appropriate Sportzcast Scorebot (all via Wi-Fi). Both cameras contain extensive built-in live streaming features via Wi-Fi and 4G connectivity for use with various content delivery networks such as YouTube and Facebook Live.

Each device is also compatible with JVC’s SLIM studio camera system for affordable multi-camera production alongside the RM-LP100 remote control as a camera control unit (sold separately). The GY-HM250E and GY-HM250SP also support a strong on-board codec than previous models, producing 4:2:2 4K footage at 30, 24 and 25p, and 50 and 60p via a HDMI output.

Both cameras feature JVC’s new tele macro shooting mode, which is set to provide improved focus on close-up subjects, and a Zero Config function allows LAN connection with other cameras via a one-click configuration.

The GY-HM180E improves on its predecessor, the GY-HM170E, with 3G-SDI output (alongside the usual HDMI output). All three cameras feature 1/2.3in BSI 4K CMOS imager and an integrated 12x zoom lens with OIS. Each device can record up to 120fps for slow-motion video and footage can be recorded to two Class 10 SDHC/SDXC cards. Users can also expect dual audio XLR inputs, a viewfinder and an LCD display.